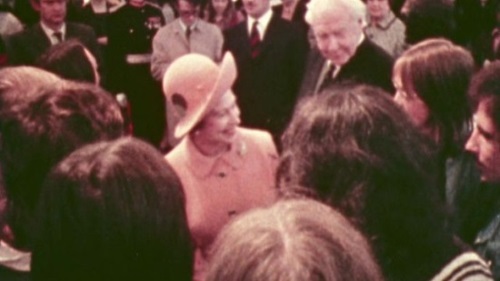 After the celebrations of the Queen's Diamond Jubilee another Royal anniversary is about to be marked.

Forty years after an infamous incident in which the Queen was booed during a visit to the University of Stirling some of those who took part in the protest will gather in the city.

The disruption to the Royal visit on 12 October 1972 led to headlines around the world and disciplinary action against 24 so called ring leaders.

The students were protesting about poor facilities in social areas in what was a relatively new institution. Ken Ferguson was a communist student in 1972 and admits booing the Queen.

He told BBC Newsnight Scotland: "I booed – certainly yes." "Stirling was a new build university. When I came here in 1972 it was still a building site and there was a tremendous dearth of social space for students which was a hot issue among the almost 2,000 students who were here at the time."

"When it was announced that the Queen was going to visit us in October of 1972, the expense and the pomp and all the cleaning up and painting of signs and so forth that goes with a royal visit caused much resentment."

That story found its way onto many newspaper front pages. One, from the Scottish Daily Express read: "Fury over Louts".

"The whole thing dragged on and that lovely campus became completely split."

Ken Ferguson said: "It was the 1970s, we were in a place of academic and intellectual inquiry and you are getting flung out because you protested because the Queen was here. It was quite bizarre."

Harry Reid told the programme there was a feeling amongst some that the incident "symbolised a society that was beginning to break up".

The charges against the 24 students were later dropped.

Some of the students of the time will gather in Stirling this Saturday to look back at a day few of them are ever likely to forget.