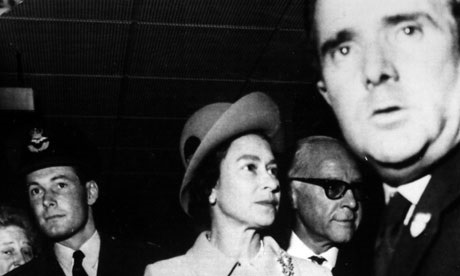 The Queen is protected from jostling students at Stirling University in 1972.
Photograph: PA Archive

The Queen was heckled and jeered by students and had to be protected by Special Branch detectives and police during a visit to Stirling University yesterday. It was probably the most hostile and rowdy reception she has ever experienced in Britain.

There was, however, a substantial counter-demonstration by other students who loudly cheered the royal party and waved "welcome" placards.

Sir Derek Lang, university secretary, said he understood the Queen was not unduly distressed, and left the university "laughing and having enjoyed herself immensely."

During the early part of her visit, the Queen unveiled a plaque in the university's Queen's Court and went to lunch with the Principal, Professor Tom Cottrell. These events passed without incident. But, when she started to tour the campus she was met by a crowd of about 400 who had occupied a room in the MacRobert centre. The entourage and police cordon were jostled and pushed as students waved their fists, chanted "Queen out," shouted obscenities, and sang ribald songs.

A police spokesman in Stirling described the conduct of the demonstrators as "disgusting," and said he was appalled at the lack of control shown by the University authorities. Many students, he said, were drunk. Their language in front of the Queen was objectionable and they were allowed far too much liberty. The whole affair was "nasty" and the police had tremendous difficulty in getting the Queen's car away at the end of the visit.

Although the police identified a small number of demonstrators who were not Stirling students there did not seem any specific anti-monarchist motive behind the demonstration. One student said the protest was made over the expense of the visit to the university. The administration had ignored students' welfare over the past month while planning the visit and the cost – officially £1,200 though there were rumours that it would be between £7,500 and £15,000 – could have been better spent on books and equipment.

The police said later that there had been no arrests. University authorities said they would take a "long, cool, calm look" at the situation before considering disciplinary action. Sir Derek said: "The Palace reaction to the visit is that the Queen had a very interesting and very good day, and she was not unduly distressed."