The Queen spoke to a student of Stirling University about the protest, which saw 400 students heckle the monarch 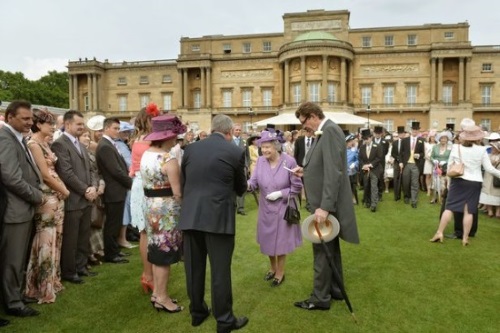 Host: Queen Elizabeth II referred to the protest at the first garden party of the year

It is more than 40 years since the Queen was heckled by a mob at Stirling University, but she is clearly not one to forget, after describing the city as "wild".

In what is thought to be the first time the monarch, 88, has openly referred to the rowdy 1972 protest against her, she spoke to Ben Butcher, who is now a student there.

Ben, 20, was at a Buckingham Palace garden party when the Queen asked him: "Is Stirling still as wild as it was?". He revealed afterwards: "She said she's been there in the past and it's a little bit wild. I said 'no it's very tranquil, very beautiful'."

During the 400-strong protest the monarch was booed, with drunk and swearing students screaming: "Queen out" and "Go home, you Hun".

The rally was the most hostile reception she has ever received in Britain and 24 of the apparent ring leaders were disciplined after detectives from the Special Branch were forced to come to her aid.

A police spokesman slammed the demonstrators' "disgusting" conduct and the ruckus, on October 12, 1972, made headlines the next day, including in the Daily Mirror, which read "Drunken Students Mob the Queen".

The story read: "The Queen was surrounded by a frightening mob of drunken students who swore and chanted obscenities yesterday.

"Throughout a four-hour royal visit to Stirling University, groups of students – drinking from wine bottles and beer cans – pushed and jostled the royal party. They clambered over flower beds and parked cars, made two-finger gestures, shouted 'Queen out', 'Go home, you Hun'."

The protesters were furious that her visit had cost £1,200, which many students thought should have been spent on their facilities.

Last week the Queen's 8,000 garden party guests were much happier to see her. Thrilled Ben was there with his brother Tom, 18, dad John and mum Helen, in honour of a huge project he did with UK water pipes. Tom said: "She's the most famous person in the world. Everyone in the world knows her, so to meet her is just an honour."

John added: "She was actually interested in what we were talking about. It was a bit surreal to meet the Queen. It's a bit of a whirlwind.

"If someone had said I was going to meet the Queen you'd never have believed it. We feel very honoured."