The Photographs of M.E.M. Donaldson

It was about 1908 that Miss Donaldson came to the Highlands with her camera. "Herself" was of the Donaldson, Shipping Line family and she was very proud of her Domhnallach ancestry.

Her studies were largely concerned with the old Clan Donald lands. She died on 17th January 1958 leaving behind a valuable collection of photographs of the western Highlands and Islands. Some of the photographs are illustrated in a book entitled "Herself" and presented by John Telfer Dunbar. The book is, unfortunately, out of print. The ISBN is: 0 85158 133 1

Moira MacDonald, Kinnigary, helped us identify some of the people featured in the book, including some wonderful pictures of her great grandparents, grandparents, uncles and aunts taken outside the old Kinnigary black house.

Page 34 contains a photo of Moira's grandmother, Mary Ann MacDonald, née Beaton, with her 4 children, Donald aged about 8 years, later drowned whilst swimming in Morar River, Charlie, Kate b.1899 and Annie. Kate, later married Sandy MacEachen, " Sandag Iain", Tougal and they had a daughter, Elizabeth Ann. The foundations of the old thatched cottage can still be seen at the foot of Kinnigary Brae, beside the burn.

Page 35 has a picture of Moira's gt. grandmother, Annie MacDonald, carding wool and on page 36 she is spinning, watched by her granddaughter.

Page 37 is another family group consisting of gt. grandmother Annie, her son, John, his wife Mary Ann Beaton, children Charlie, Kate, Annie and Angusina, who was Moira's mother. Angusina was a nurse and married John Campbell from Barra. Charlie and Annie remained unmarried.

On pages 38 and 39, gt. grandmother continues spinning and winding wool and on page 40, she can be seen feeding the hens. Another splendid photo has John wearing his sou'wester and standing on the beach below Kinnigary John died in Rhu acha Mhòr a week before his 100th birthday.

In another photo, John MacDonald's brother, Donald, is examining a peat cutter and yet another picture shows him enjoying a smoke beside his boat. Donald was a tug- master, for many years, with the Clyde Port Authority.

Page 66 contains a lovely photo, which has been much reproduced, of Moira's Uncle Charlie, aged about 8 or 9, barefoot and clad in his wee kilt and tweed, hill jacket, standing above the bay, with a brace of what may be haddock, in his hand. In his adult life Charlie was always known as, "Charlie Rhu acha Mhòr". 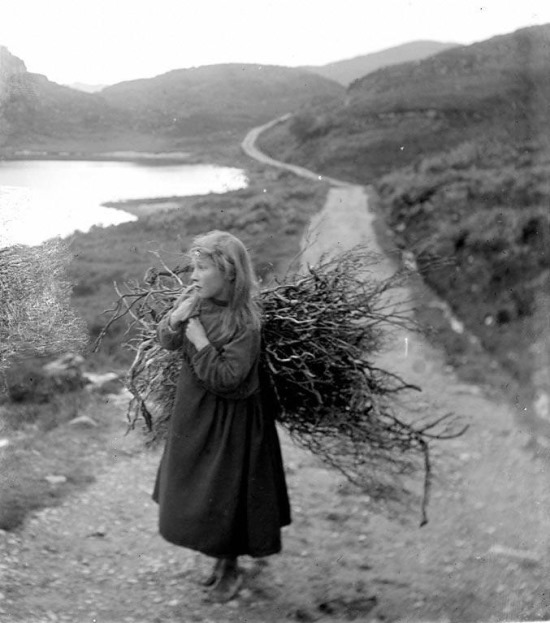 On page 67 there is charming photo of Christina MacVarish carrying a bundle of brushwood for the fire. Christina was the daughter of Neil MacVarish and Margaret MacRae and her brothers were, Donald, John, Sandy "the Post" and Angus who ran the Post Office on the family croft in Bracara. Christina's father, Neil MacVarish was drowned off Eilean Ighe, Arisaig. Christina married Sandy MacDonald and they lived in Meoble. Their son, Neillie with his wife Màiri and children, were the last of the native families resident in Meoble.

Christina's husband, Sandy and his brother, John MacDonald, Inverosie, were natives of Moidart. John was married to Isabella MacDougall from Glen Nevis. Their daughter, Ishbel MacLellan, one of 8 children, lives in Morar.

Page 54 shows a photo of Allan MacEachen, who had a croft at Kinsadel and the now derelict dwelling was the family home of his son, Hugh, or, Eòghainn Ailein Eòghainn whose wife was a Barra woman. Their children were Archie, John and Mary Ann. Page 51 is a photo of Donald Macallister (see next page) standing on the old Rhue pier. The old pier was in good condition then. Macallister, who lived at Morroch, used to row M.E.M.D. on the 6 and a half hour journey to Eigg. He is buried in the old cemetery of Cill Maol Ruadh, where no headstone remains to show us his grave.

Pages 45 and 47 contain photos of Angus MacLellan, Seaview, Morar, cutting peats and cleaning the well. The likeness to his nephew, Ronnie Seaview, is remarkable.

Page 65 shows Katie Ann MacDonald, Bourblach, Morar, who was one of a family who lived in the 2, now derelict buldings on the shore. One of the buildings was a shop.

Page 70 is a picture of Ronald MacLaughlin who used to live in Rhubana and was the gamekeeper for Arisaig estate. Ronald's son John, was married to Lily MacEachen of Knoydart and they had one unmarried son, Ronnie. John was water bailiff for Prentice until he retired and came to live in the cottage in the Square at Cross Farm. Lily predeceased John. Her two sisters, Maggie and Kate had worked in Traigh, with the Shaw Stewarts, for many years and when they retired in the early 60s, they came to keep house for their brother-in-law, at Cross. Flora, another of Lily's sisters, was married to Donald Duncan MacLellan, who was originally from Riverside, Morar, and latterly, of Traigh Farm where he was farm manager. Their children were, Duncan, Ishbel and James.

Page 68 features Angus MacDonald, one of the accomplished piping brothers from Bun a Chaimbe, South Morar - although I think that the Arisaig people could claim them as their own. As a young man Angus was estate agent on the estate of South Morar for Aeneas (Aoghnas) MacDonnel. He was taught piping by Duncan Campbell, Foss and also by the MacKays who were composers and pibroch players. Angus was unable to compete in the public arena until he was 41 but then, with his brother George, competed at all the major games in the North. Between them, they took all the premier prizes in the area. Angus was a renowned piper of world class and his advice on the Ceòl Mòr was keenly sought by amateur and professional pipers. Although Angus was unmarried, the descendants of his siblings, some of whom are fine musicians, still live in the district.

On page 44 is a photo of a man with a wooden, agricultural, implement, not unlike a plough but, this it appears that this was for hoeing between the rows of turnips. This is Sandy "a' Gheamair", MacKellaig, grandfather of Catrìona, Màiri and Mairead, MacKellaig, Beoraid.