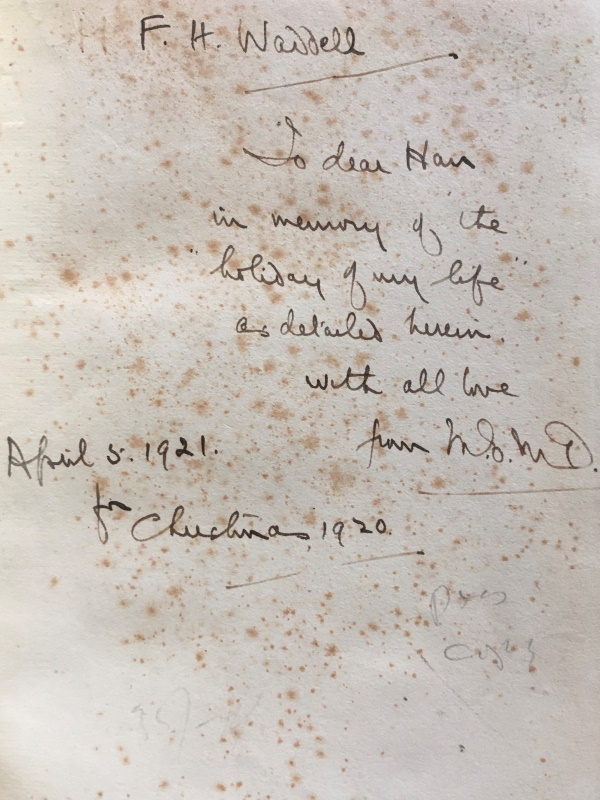 I came across your website whilst finding out more about ‘Herself’.

I bought her book Wanderings in the Western Highlands from eBay, and found the inscription (attached) within it. I thought you might like to know, as it appears to be written by MEMD for Fran, that is possibly Frances Hannah Waddell born April 1920 - and was your relative?

I think the three-week gap was due to Darryl’s email being bizarrely assigned to my spam folder, which I certainly ought to check more often.

From: Robin Waddell, 10 May 2021
To: Darryl Ballantyne-Watts
Subject: MEMD

Thank you for sending that fascinating image of the autographed flyleaf - it is of course a first edition, and all the more special! The electronic version on the website is the revised edition of 1923, I think. I'm so pleased that the book has found its way to someone such as yourself, who values it all the more for the family connection, and has tracked it back to [me].

'Han' was Jessie Frances Hannah Waddell (nee Findlay), 1882-1974, a lifelong friend of MEMD - she didn't use the 'Jessie' forename, which she didn't like. She was always known as Hannah, hence the affectionate abbreviation 'Han'. MEMD was godmother to Hannah's eldest son, Walter, my father.

Frances Hannah Waddell, 1920-2002, was her elder daughter, my godmother, who did use the 'Frances' forename. She may well have been MEMD's executor, and certainly (according to her sister Jane) [sent] MEMD's personal effects (books, correspondence, etc etc) to the Kilchoan post office for safekeeping. She was also (I think) Hannah's executor and so disposed of her books (including all MEMD's oeuvre) to Oxfam (or similar) - which is probably how your volume started a Wandering of its very own!

The wording on the flyleaf certainly suggests that Hannah might have accompanied MEMD on the original 'Wandering' [especially as Old Grannie, Hannah’s resourceful mother-in-law, could easily have taken charge of Hannah’s household and the infant Frances], but MEMD seems never to have identified her companions (or else used cryptic pseudonyms) on her wanderings. The artist and illustrator Isabel Bonus was of course her lifelong partner.