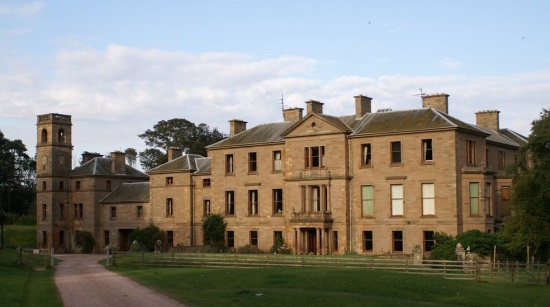 The estate of Cambo was granted to Robert de Newenham by a charter of King William the Lion. His descendents took the name "de Cambhou", and had settled in Fife by the early 14th century. Sir John de Cambhou fought at the Battle of Methven (1306), but was captured by the English and hanged. In 1599 the estate was granted to Thomas Myretoun.

In 1668, Sir Charles Erskine, the Lord Lyon King of Arms and brother of the 3rd Earl of Kellie, purchased the property from the creditors of Patrick Merton. The estate passed through the Erskine family to the 5th Earl of Kellie, who forfeited his lands after supporting the Jacobite rising of 1745. In 1759 Cambo was sold to the Charteris family, who bought it for their son who was studying at St Andrews University.

Thomas Erskine, 9th Earl of Kellie, bought the estate back in the 1790s. A successful merchant in Sweden, he invested heavily in improving the estate, building the picturesque Georgian estate farms, and carrying out extensive land drainage. He commissioned the architect Robert Balfour to remodel the house in 1795. His descendents continued the improvement of the estate through the 19th century, laying out ornamental gardens, with a series of early cast iron bridges.

The old house comprised a tower house with numerous additions, including a first-floor conservatory. It was destroyed by fire in 1878, after a staff party when the Erskine family was away. The present house was built on the same site between 1879 and 1884.

Wikipedia's account, though a brisk and useful introduction, barely scratches the surface. Thomas, the 9th Earl, was not just a successful business man, he was a really nice chap. He and his wife Anne having adopted the children of his natural daughter in Sweden, a new baronetcy was created (at his behest) in 1821 for their eldest adoptive son David who thereafter inherited the estate of Cambo – a family tradition that continues to this very day, as now recounted by the present Lady Erskine of Cambo.

The estate of Cambo was first occupied by John De Cambo who, it is thought, received it as a Norman land grant from the King in the 12th or 13th century. It was acquired by the Lindsays at some point and then sold to Thomas Merton in 1620.

The first Erskine to buy the estate was a Sir Charles Arskine who was then Lord Lyon King at Arms and purchased it from the creditors of Patrick Merton. The family have lived here almost continuously since then. In 1759 it was sold to the Charteris family as a student pad for their son who was studying at St Andrews University.

The original house at Cambo. Destroyed by a fire in 1878

The 9th Earl of Kellie, Thomas Erskine, who was a cousin of the previous owners, bought the estate back from Mr Charteris when he returned from a successful business career in Sweden.

He was an able, energetic and enterprising man who rose to prominence in Sweden and ended up as Captain of the Baltic ports, running his own East Indiaman called the "Kellie Castle". On his return to Scotland he became involved in the local community and ended up owning the famous links at St Andrews and is largely responsible for its present form. Having negotiated a rent from John Begby of £100 per annum he quickly sold the estate for considerably more than the £800 he had paid for it. The unfortunate purchaser ended his financial career embroiled in the rabbit wars that ended in parliament more than once.

Another of his local enterprises was the starting of a sail factory in St Andrews which at that time was at the lowest point in its fortunes, the church having been closed down and the University in decline. The heads of the Danish, Norwegian and British navies were invited to a demonstration of his new sails. However the skipper of the English frigate to be rigged with the new sails arrived one month early for the trial. He was an extremely arrogant man and demanded that the unfinished sails were mounted on his ship as soon as he arrived. There was a fierce storm, which wrecked the unfinished sails, and so the sail factory did not survive. If this had not been so then St Andrews could well have become the centre of the coarse weaving industry on the East Coast of Scotland instead of Dundee.

The existing Cambo House being built in 1880

The sail factory was set up not only to assist the economy of St Andrews but also because the Earl was aware that the local population's enjoyment of the hemp plant reduced the likelihood of the area ever becoming a successful fine weaving centre.

The Earl invested heavily in the estate and it is suspected that he is responsible for many of the handsome Georgian farmhouses with fanlights over their doors, the pantiled cattle buildings, the construction of the dykes and "condies"  (streams buried in stone built channels) and Cambo Farm mill pond, which we now understand was a retting pond. One of these condies you will see elegantly displayed running just beside the 18th green of Kingsbarns Golf Links and then on down to the sea.

The 9th Earl was married but had no heirs through his wife. However prior to his marriage he had a daughter, Anna Eglehart. He and his wife adopted all his daughter's children and the eldest one of them became the first baronet of Cambo in 1821 as he was unable to get the knighthood transferred being illegitimate. Both the first and second baronets of Cambo were captains of the R. & A. and were clearly keen golfers. Kingsbarns Golf Links clubhouse has copies of their portraits hanging in its lobby.

The old house (which can be seen in photos and watercolours on the ground floor along from the Games Room at Cambo House) was gutted by fire in 1878 after a good staff party when the family was away. Looking at the photos and watercolours it is possible to see that much was added over the centuries to a basic 13th century tower. One of its most attractive features was the conservatory on the first floor.

The existing Cambo House without the Clock Tower!

It is rumoured that the factor was instructed to build something a bit bigger than any other house in Fife. Original architect's (Thomas Wardrop) drawings and early photos can be seen on the left by the pay phone. It is an interesting reflection that the main reason the house has survived is that enough money was spent to provide spacious, airy and well proportioned servants' quarters with decent sized, well placed windows, unlike so many houses of the time where the servants' quarters were pokey and horrid. Peter's grandfather had 8 children, of whom 5 survive. They were never allowed parties in the large public rooms as his grandfather insisted that the floors were not strong enough!

The drawing room originally had a magnificent pipe organ at one end of the room. Manufactured by Foster and Andrews of Hull in 1882, its bellows pump was powered by the Cambo burn – this was a fairly common method prior to electric motors. The bellows can also be powered by a hand-operated pump but it requires considerable physical strength. In 1953 Peter's father gifted the organ to Kingsbarns Church where it can still be seen. For all the magnificence of the drawing room it was not the cosiest of rooms and Sir David's sister, Vicky, recounts how they all used to sit huddled round the fire, wearing many layers of clothes and with very cold hands which were kept busy as their mother insisted that they all occupied themselves with some form of handiwork. Sir David was still designing and working tapestries until relatively recently.

Our servants' quarters now make spacious and comfortable apartments that visitors return to year after year. Hence the names Upper and Lower Servants – many visitors know Upper Servants better as Parkview (its name for many years) but Peter's father has always called it 'upper servants' and when we were looking for a name for the recently renovated Lower Servants we decided to revert to the original names for both apartments – not that the servants lived in quite the same style. All the rooms were bedrooms, there was one small w.c. and washing facilities were in a communal sink in the passage (retained for posterity in Lower Servants).

The games room is the original servants' hall where the staff were fed. In the 1920s & 30s the family fortunes were at a relatively low ebb so there was no footmen or butler and the family had to rough it with a household staff of only 13!

Cambo House as it is today.

Peter's father succeeded after the war and came back from the Far East to run the estate which he did very successfully until handing it over to Peter in 1976. Sir David and Lady Erskine started letting parts of the house in the late 1940s and during the 50s and 60s had many tenants often associated with the university. Increasingly apartments were let to students from September to June with holidaymakers in July and August. This is what Peter and Catherine inherited and ran successfully until the early 90s. Gradually the demands of holidaymakers became increasingly incompatible with the way students lived. By the mid 1990s letting to students had ceased and serious investment in upgrading the apartments began.

One of the most profound decisions in the farming operations was not to try and modernise the traditional steadings but to build from new when necessary and leave the old ones as they were which now leaves some enchanting buildings to improve.