Fairbairn's Book of Crests of the Families of Great Britain and Ireland, Vol 1 (text) 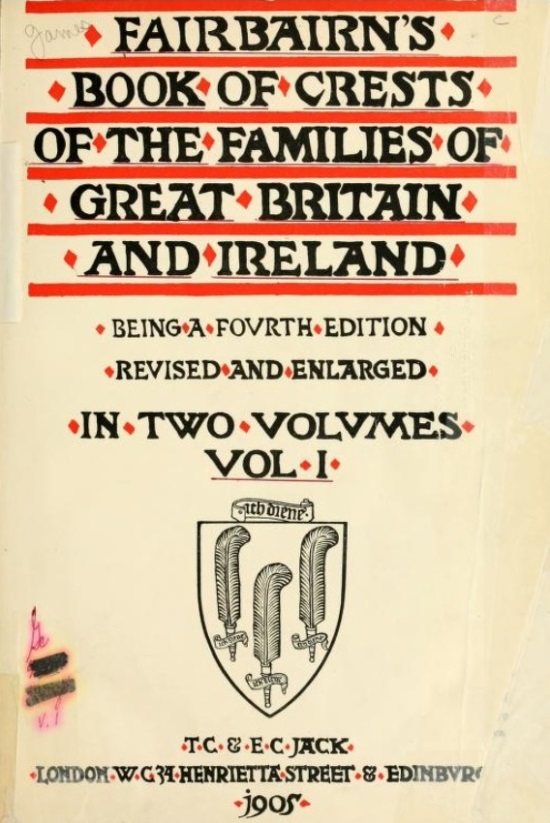 Fairbairn's Book of Crests of the Families of Great Britain and Ireland, Vol 2 (plates)

Vol 2 doesn't seem to be available in an electronic facsimile page-turning version. 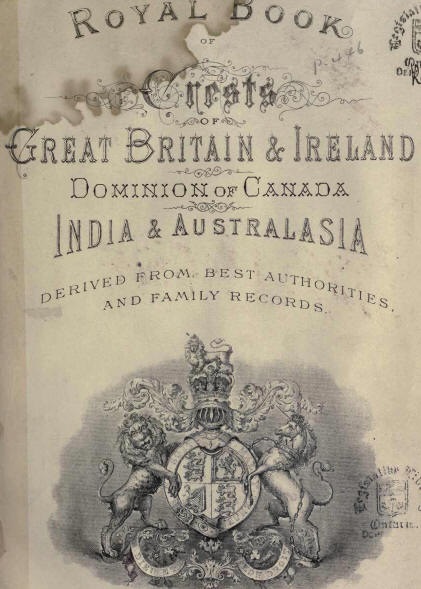 HERALDRY was employed in the feudal ages to display the exploits of chivalry, and to reward as well as commemorate its triumphs over oppression and violence. Amidst the imperfections of uncultivated eloquence and a general ignorance of written language, the ensigns of heraldry were peculiarly significant. They addressed the imagination by a more direct channel and in a more striking manner than words; while at one glance they recalled the most important events in the history of persons, families, and nations. Their immediate relations to war, and to the honourable distinctions arising from it, connected them with the deeds and manners of former times. Exhibited on the shields and vestments of warriors, they also adorned the most splendid apparel of peace; and were often transferred to more durable materials, to perpetuate the memory of those who bore them. They formed the chief ornaments in the palaces of the great, were chosen by artists of various professions to embellish their respective works, were set up in courts of judicature, and impressed on the public money. Thus, to the utmost extent of their application, did armorial bearings become the symbolical language of Europe.

In all the countries of Europe, rank, title, and precedence are the grand prizes in the race of life. This is especially true of Great Britain, where, from many causes, these honours are universally and justly believed to be endowed with a "mortal immortality," to be stable as the rocks that gird our isle; but that the avenues to the titled platform, until a recent period of our history, have been too jealously guarded, and that the honours due to genius, valour, patriotism, and industry have been too much bestowed in the spirit of party, will hardly be denied.

The nobles of a land should constitute at once its glory and its strength; they should be in some respects its "turrets and foundationstone." In no country are these requirements so generally met as in our own, where diadems and coronets cannot shelter from the consequences of dishonour, but, on the contrary, derive additional lustre from the practice of virtue and the efforts of patriotism.

A Crest is the uppermost part of an Armoury, or that part of the casque, or helmet, next to the mantle. It derives its name from Crista, a cock's comb, as it was supposed to have been originally a projection over the top of some helmets (many of which, however, had none), and it has been supposed by Antiquarians that the first hint of the Crest arose from this projection. The Crest was deemed a greater mark of Nobility than the Armoury, as it was borne at tournaments, to which none were admitted until they had given strong proofs of their magnanimity. Hence, the word Crest is figuratively used for spirit or courage. The original purpose of a Crest, as some Authors affirm, was to make a commander known to his men in battle; or, if it represented a monster, or other tremendous object, to render him warlike and terrific. But there is no satisfactory proof whether the Crest was really meant to render a leader easily recognised by his men, to make him look more formidable in battle, or as an ornamental mark of distinction.

Some Writers imagine that Crests were originally plumes of feathers; but, in all probability, these were nothing more than a particular kind of Crest. The earliest Crests with which we are acquainted, were animals of different kinds, and their parts, monsters, branches of trees, plumes of hair or feathers, and the like.

The Crest was an honourable emblem of distinction, which frequently characterised the bearer as much as his arms, and was sometimes constituted by Royal Grant. Crests are said to have been of particular use in tilts and joustings, where no shield was borne, for the bearer was thus distinguished who would otherwise have been known by his armorial bearings. We find in the representations of ancient encounters, that the combatants appear with enormous Crests, almost as large as the helmets.

Those Knights and Gentlemen, who repaired to tournaments, were distinguished by their Crests. None were deemed . worthy of partaking of such fetes who did not bear arms of some kind, unless of undoubted superiority by birth or merit. Crests were likewise embroidered on the vestments of the attendants at the processions of Parliament, Coronations, and public solemnities; they were also engraven, carved, or printed on property in the same manner as coats of arms. According to the general opinion, the Crest was not hereditable like the arms of a family, and, consequently, every successor might assume a new one. This, however, was not the practice of this kingdom; for it is well known that the Crest of many families, being esteemed as distinctive as the bearings in the shield, has been transmitted from one generation to another for several centuries. The immense variety of Crests has probably arisen from the younger branches of a family retaining the paternal coat, and assuming a different Crest; and this may be the cause for supposing that the Crest may be changed though the arms may not. Some declare a Crest is a mere ornament, but it has been so much considered a mark of distinction that different Sovereigns have made additions to the Crests of their subjects. Indeed, it was uniformly esteemed an honourable symbol. In addition to Crests being the subject of Royal Grant, there are instances of some having been assumed and confirmed in commemoration of warlike deeds or other honourable events. Some were taken to preserve the fame of a progenitor, whose name implied something martial or illustrious, and others were allusive to dignified offices. Several have been granted for certain services. It appears from ancient monuments, that the Crest consisted of some plain and simple device, or what was. applicable to the assumer only; as appears from an eagle's head, a bird's wing, a peacock's tail, a banner, &c. But so great has been the deviation from this practice, that it is impossible to assign any rule for the subsequent assumption of Crests. Many persons of different names bear similar Crests, and as many of the same name bear different ones. Every day we may behold the most uncommon, complicated, and unintelligible Crests, chosen without design or reason. Women, it is generally asserted, may not bear Crests, because in ancient times they could not wear a helmet. We have, however, innumerable instances of women bearing coats armorial; a fact particularly illustrated by their seals, which are still preserved: and here, undoubtedly, is a gross inconsistency, for a woman was as incapable of using a shield as of bearing a helmet.

The period when Crests were first introduced into Britain cannot be ascertained. We find in a drawing of the thirteenth century, relative to a military encounter of Ofia, there is a figure with a kind of Crest on the helmet; and the same figure occurs again in another transaction of that time. The great seal of Richard L, who died A.D. 1199, first represents the English King with something on his helmet resembling a plume of feathers. After this reign most of the English Kings had crowns on their helmets. On that of Richard II., prior to the year 1377, is a lion on a cap of state. On the helmet of Henry IV. is his Crest, as also on the head of his horse.

Alexander III., who began to reign I 249, is the first of the Scottish Kings who appears with a Crest: he has a flat helmet with a square grated visor, and a Crest consisting of a plume of feathers; a plume is likewise on the head of the horse. The helmet of Robert I., who began to reign 1306, is found with a triangular grated visor, a crown above it, and plumes on the horse's head. Ornaments are on the head of Edward Baliol's horse, nearly of the same period. The visor of David, the successor of Robert, is in front, but no Crest on the helmet, nor have the two succeeding Kings any. James I., in the beginning of the fifteenth century, has a lion on his helmet for a Crest.

At the time the Royal Seal exhibited no Crest they were common on those of subjects. It is affirmed that, before the year 1286, the Crest, accompanied by the mantlings and wreath, was known in England. In 1292 there is a seal of Hugh le Despencer, with a warlike figure on the helmet and horse's head. These figures are frequently to be met with in the thirteenth century, but what they represented, or what their utility was, is doubtful. There is a dragon on the helmet of Thomas Earl of Lancaster, who was beheaded A.D. 1322. On the reverse is a swan above the shield, just where a Crest should be, on the one, and on the other a lion; but whether they were designed for Crests, or for figures on which the shield was hung, as was then usual, cannot be positively said, for it was sometimes suspended from an eagle's back around the neck, or hung on a tree.

The same may be said of Scottish Crests; though none are on the great seal they are frequent on those of subjects. There is a writing of great importance, dated 1371, to which many seals are affixed, and most of them have a Crest. On a seal of the Earl of Strathern, attached to a writing, 1320, is a shield placed between eagles, so that the head of the bird appears above, like a Crest. The helmet of Robert, Governor of Scotland, bears a lion, 1413; and the same is on that of Murdac, his successor, both being Crests.

The chief sources from which Heraldic instruction is to be derived are the seals which are appendages to ancient writings, illuminated manuscripts, tombs, and buildings. Seals are the most authentic, but proper illuminations probably afforded better illustrations, because seals bear the armour only in a particular character. It is also very probable that the same seal hath served for several generations. Indeed, one of the most useful purposes to which both Crests and armorial shields were applied, was in the seals affixed to written instruments, as already intimated.

To a volume like the present, further preliminary observations would be superfluous; we shall therefore close this brief introduction with informing the reader that the objects of this work are to encourage the study of this important branch of the Heraldic science; to present as full a collection of Crests as the limits of the work will admit; and to exhibit a large number of subjects, which for drawing and engraving have never been equalled, and which will serve as a standard of excellence for all future time.