David Metcalfe, who has died aged 84, was a "man about town" celebrated by diary columns for his high society connections; the Duke of Windsor was his godfather, and his wives included the beautiful widow of a British film mogul and a French countess. 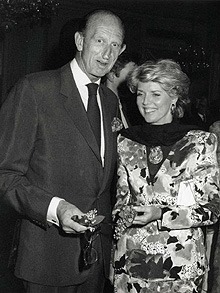 The son of Edward "Fruity" Metcalfe, best man to the recently abdicated Edward VIII at his marriage to Wallis Simpson, David Patrick Metcalfe was born on July 8 1927 in the splendour of Carlton House Terrace, home of his grandfather George, Marquess Curzon of Kedleston, Viceroy of India and imperious Foreign Secretary under David Lloyd George. His mother, Lady Alexandra "Baba" Curzon, was a 1920s "It" girl whose closest friends included the Prince of Wales and his brother George.

Fruity Metcalfe, a charming and impecunious Irishman, was one of the most colourful members of the Prince of Wales's staff. Having originally been recruited to look after the Prince's polo and other equine diversions, the pair soon became best friends. At Balmoral and Buckingham Palace, however, Fruity was considered a thoroughly malign influence. "Metcalfe is not at all a good thing for HRH," Edward's private secretary, Godfrey Thomas, wrote to the Queen. "He is always cheery and full of fun but far, far too weak and hopelessly irresponsible." George V eventually ordered his son to give Metcalfe "the push" but in later life the two were reunited.

David Metcalfe reputedly bore the signs of his family's royal connection throughout his life – his bent nose was rumoured to have been broken when his godfather, the Prince of Wales, dropped him head first on the terrace at Cliveden. When the Duke of Windsor died in 1972, he left David a pair of cufflinks.

David was educated at Eton, where, according to diarists, his greatest claim to fame was that "he was excused wearing shorts owing to a larger-than-life lunch box". The uniform of the Irish Guards proved an adequate fit, however, and in 1949, by the end of his three-year commission, he was a second lieutenant.

Metcalfe then joined the insurance broking industry, having turned down an offer to work for Lord McGowan, chairman of Imperial Chemical Industries (ICI) for £249 per year.

Like his father, David Metcalfe was charming and moved easily in society circles. In the post-war years, he threw "warm whisky parties" in his Motcomb Street garret where guests included Vivien Leigh and Margot Fonteyn. He met and, in 1957, married Alexa Korda, the widow of Sir Alexander Korda, the flamboyant Anglo-Hungarian film producer who sought to challenge the dominance of Hollywood with his company British Lion Films.

Alexa (née Boycun), a great beauty of the period, was a Canadian of Ukrainian extraction. Described snootily in press reports as "the daughter of a Toronto market gardener", she had married Korda in 1953 when she was 25 and he 60. When he died three years later, she inherited his fortune and his superb art collection – including works by Degas, Canaletto, Renoir and Monet.

Metcalfe and Alexa lived in a grand house in Swan Walk, Chelsea, in a Britain still coming to terms with post-war hardship. In 1962 they put up at Sotheby's what was then labelled "the largest single collection of Impressionists to be sold in one go", a sale that prompted headlines when the proceeds reached nearly half a million pounds. The Daily Mirror ran a picture of Alexa Metcalfe under the headline: "£465,000 richer!" A Van Gogh in particular caused harrumphing over inflated prices because it sold for more than £80,000 (equivalent now to a bargain £1.4 million).

The couple had two sons and a daughter, but divorced in 1964; two years later Alexa died after taking what a pathologist at the time suspected was "a sleeping draught". Their children, including Julian Metcalfe, the future founder of the Pret A Manger sandwich chain, moved back to live in great style with their father. "We had powerful people to dinner all the time," Julian Metcalfe later recalled of his childhood.

In keeping with the times, she wore a white minidress to the wedding. But the marriage was not a happy one and ended after five years. He then, in 1979, married Sally Cullen Howe, from New York. The ceremony took place in the Bahamas and was witnessed by the recently deposed Shah of Iran and Henry Ford II, among others, and proved to be the longest and most successful of Metcalfe's unions. Back in London, at their splendid Belgravia home, the couple became famous for parties and dinners. Friends celebrated Metcalfe as "the last man about town with a bit of style". At his home in Wilton Street, he was host to "everybody who is anybody".

In particular Metcalfe had a flair for pairing New World entrepreneurs, ambassadors and tycoons with Old World aristocrats, intellectuals, royalty and social commentators. His dining table was frequented as much by dukes and royalty as it was by Detroit and Texas tycoons and politicians from across the political spectrum.

One evening in 1982 Metcalfe brought together the blue-blooded directors of Sotheby Parke Bernet – including the Earl of Westmoreland and Angus Ogilvy, husband of Princess Alexandra – with a selection of Michigan high-rollers willing and able to rescue the teetering auction house from falling into the clutches of an aggressive and unwanted takeover. That night three billionaires – Alfred Taubman, Henry Ford II and Max Fisher – agreed to buy Sotheby's, with Metcalfe proving himself the perfect society-business matchmaker.

Metcalfe himself held various positions in insurance and investment banking, where his talents as a broker made him a much-watched figure. As well as spending decades at Lloyd's, he held directorships of Stewart Smith, Sedgwicks, and Marsh & McLennan.

Though a man who appreciated traditional style and values, Metcalfe was not tiresomely nostalgic. His charm and loyalty were accompanied by a talent for wicked social commentary. He enjoyed shooting and he continued to waterski, play tennis and windsurf into his eighth decade.

David Metcalfe is survived by his wife and by the daughter and two sons of his first marriage as well as two stepdaughters. Another son, from his second marriage, predeceased him.