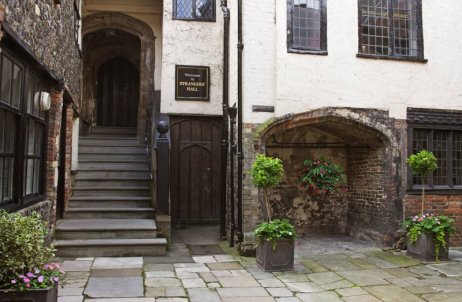 Although the Elizabethan Strangers are perhaps the best known of the immigrants from the Low Countries to Norfolk, Flemings were invited to Norfolk in 1338. Contemporary documents tell us that there were 21 Flemings in the county in 1375, and 25 in 1391.

The Elizabethan Strangers arrived in Norwich in 1565 after an official invite from Queen Elizabeth, which allowed 24 Dutch weavers, 6 Walloon weavers and their families to settle in Norwich. The invitation meant these Protestant weavers could escape religious persecution in the Low Countries, whilst also helping to revive Norfolk's flagging cloth industry by imparting their skills and knowledge to the natives. By the end of the 16th century, there were over 4,000 Protestant refugees in Norwich, accounting for about 1/3 of the population. At this time, both the Dutch and Walloon groups had their own church and cloth hall.

The Dutch church was located at Blackfriars' Hall (part of The Halls). Elizabethan Strangers used the church from their arrival 1565. The Choir became known as the 'Dutch church' in 1579. Their last service was held on the site in 1929. Evidence of the Dutch church can still be found in the building today; memorials to the pastors John Elison (1581 – 1639) and his son Theophilus (1609 – 1676) can be seen on the north wall.

St Mary the Less on Queen Street, owned by the Norwich Corporation until 1627, was once a merchant cloth hall where Dutch and Walloon merchants sold their cloth. It was then was rented to the Walloon community for use as a cloth hall. In 1637, the same community bought the church and converted it into a French Protestant church.

Strangers' Hall is perhaps so-called because Strangers registered there shortly after arrival in Norwich, and some also lodged there. The Strangers were also encouraged to come to Norwich by Thomas Sotherton, Mayor of Norwich, who resided at Strangers' Hall. Although Strangers in London often encountered xenophobia, those in Norwich were not subjected to the same extent of disdain. Indeed, some were praised for their positive effect on young people, and their knowledge of weaving and also of crops. Others became good friends with the natives, married English people, and some wealthy Strangers sent their children to Norwich Grammar School and Cambridge University. They were not, however, entirely welcomed to the city. Some people were concerned the Strangers were drunkards and some locals even formed an anti-Stranger group, which aimed to force the Strangers out of Norwich. Though this movement was crushed and the leaders sentenced to death, this serves as evidence that the Strangers and natives did not always live together in perfect harmony!

Many people from the Low Countries (and people whose ancestors had emigrated to Norfolk from the Low Countries) stayed in Norwich and, after a while, assimilated completely with the local community. Indeed, whilst, once Dutch and English would have been heard together on the streets of Norwich, as the years passed, the Dutch language died out in the city and English became the city's main language. Many Dutch names were also Anglicized, and peoples who would have once attended Dutch churches began to attend Church of England services.

Immigration was not one-way; indeed, many people from Norfolk, particularly those fleeing religious persecution, emigrated to the Low Countries in the 17th century to settle, visit relatives, learn Dutch, or enlist in the Dutch army. Some became members of the English Church in Rotterdam.

Many aspects of agriculture and horticulture were introduced to Norfolk from the Low Countries. The Strangers introduced market gardening to Norfolk. In addition, the Florists' Feast – held annually in Norwich in the 17th century – is believed to result from horticulture in the Netherlands, and provides a nice link to Ghent's quinquennial flower festival.

In 1624, ten years after being naturalized in England with his wife, Sir Cornelius Vermuyden, a Dutchman from St. Maartensdijk in Zeeland, was appointed as the chief engineer responsible for the draining of the Fens, a project that has been described as the greatest land reclamation scheme in England.

Even before Vermuyden's work, Dutch drainage experts were employed in Norfolk. For example, at the church in Haddiscoe lies a Dutch inscription that mentions 'Peter Peterson' a 'dyke-reeve' in 1525.

Crop rotation in Norfolk was made possible by the fact that turnips were introduced to the county from the Netherlands in the 16th century and clover in the 17th century.

Ploughing in Norfolk was greatly aided by the introduction of the two-horse plough, based on a Dutch model, which replaced the traditional heavy eight-ox plough.

In the 17th century, Friesian cows were introduced to Norfolk from Holland. Cattle from places such as the Netherlands were also sent to Norfolk to be fattened on the marshes before being sold at St. Faiths Cattle Market near Norwich.

Goldsmiths and silversmiths from the Low Countries were resident in Norwich in the 16th century.

William Mundeford, a native of Utrecht and a glazier, can be found on a list of alien resident in Norwich in 1436. William seems to have, at one time, been the servant of John Wighton, a Norwich glazier who had a workshop in the city. However, in approximately 1439/40, Mundeford appears to have commenced glazing himself in Wighton's workshop. He may have been joined by his wife Helen (who was also a glazier), and the family tradition remained when his son John started an apprenticeship in Wighton's workshop in 1446. Wighton's workshop appears to have been responsible for some of the original windows in St. Peter Mancroft, the first parish church in Norwich. The particular windows are probably the 'Toppes Window' and the 'St John the Evangelist Window', and members of the Mundeford family almost certainly contributed to the glass. William Mundeford himself also appears to have worked on the dormitory windows in Norwich Cathedral.

Henry Pers, a Franco-Flemish glazier, also resided in Norwich in the 15th century, and seems to be the 'Henry Gloyser' who mended the window in St. Helen's Church at the Great Hospital.

The textile industry has long been connected Norfolk and the Low Countries.

After the Norman Conquest, a group of Flemish weavers seized the opportunity to develop trade in Norwich (a place they had often sold to) by moving to the area.

In 1336, Flemish wool weavers emigrated to Worstead in Norfolk and Oliver de Gros set up the Worstead Market.

The Elizabethan Strangers were not immediately accepted by the natives and some felt similarly about the people of Norfolk, refusing, at first, to share their knowledge of textiles. However, it seems they had a wonderful influence on the city's textile industry, introducing certain cloths (such as damask and worsted – the latter of which may have derived from Ghent) and techniques, and invigorating the industry by sharing knowledge with the natives (just as the natives shared their knowledge with the Strangers).

It appears that the immensely popular 'Norwich Stuffs' of the 17th and 18th centuries evolved from materials developed by the Walloon settlers.

The industry is associated with several buildings in the city, including Dragon Hall and the Guildhall, which housed a cloth hall in the room that is now Caley's café. The Assembly House can also claim a link to the industry; it held a 'Crape Ball' in the 19th century to promote the new, fashionable Norwich Crape, a soft silk and worsted fabric produced in the grey and dyed in numerous colours. At the Crape Ball, wives and daughters of the 'great and good' of the city were encouraged to wear Norwich fabrics of geranium-coloured crape, to support local distressed weavers.

Anthony de Solempne, a native of Brabant who moved to Norwich in 1597 introduced printing to the city and printed one of the earliest editions of the Psalms in 1598.

The 'Norwich School' (the only regional school of painting in England) was heavily influenced by the work of the 17th century Dutch masters. For example John Crome, the founder of the Norwich School, had access to Dutch and Flemish paintings in the collection of Thomas Harvey, who was his first patron.

Dutch gables, such as the ones on Raynham Hall in Norfolk (begun in 1622) were not the result of a direct influence from the Low Countries. Indeed, England as a whole embraced Dutch gables at this time.

More direct influence on architecture can be seen on some smaller 17th and 18th century buildings in Norfolk, such as the Fisherman's Hospital in Great Yarmouth which features curved gables.

In Norwich, the design of the 15th century Guildhall may have been influenced by similar buildings in the Low Countries.

Dutch fishermen from Zeeland had a large impact on the Great Yarmouth fishing industry, as they were able to share extensive expertise with the natives. Thirty families settled in 1568 and by 1571 one hundred and four families resided there.

In the 17th century, Dutch herring fleets were very active on the east coast. As a result of this, some Dutch words became commonplace in the vocabulary of local fishermen and the local fishing industry adopted some Dutch ideas. The arrival of the Dutch fleet remained a highlight on the fishing calendar of Great Yarmouth until well into the 19th century.

Strong trading links between Norfolk and the Low Countries have existed for thousands of years and, indeed, this contributed to the strong links in general between the two.

The route from Norfolk to the Low Countries was the most common trading voyage of the Middle Ages and, at this time, Flanders (followed by the Netherlands) became trading posts for goods from all over Europe and the Orient.

Robert Toppes, a 15th century wealthy Norwich merchant and several times Mayor of Norwich, traded widely with the Low Countries. Toppes built Dragon Hall as a trading complex. The 27 metre long 'Great Hall' served as a showroom where Toppes displayed his wares, including those from the Low Countries. Although little archaeological evidence has been found relating to these wares, a coin weight deriving from the Low Countries, France or Germany has been discovered. Furthermore, Toppes may have had connections with a powerful Flemish family, as the wealth of Norwich was bound into the wool trade and the Flemish sellers and weavers.

Although not specifically 'trade', 18th and 19th century smugglers moved spirits and tobacco from Holland to Norfolk.

Settlers from the Low Countries appear to have influenced language in East Anglia. Perhaps the most striking example of this is the 'third-person singular present tense zero', or, to put it more simply, the tendency to omit the 's' from certain words, for example 'that look like', instead of 'that looks like'.

The Strangers are responsible for the nickname of Norwich City Football Club – 'The Canaries'. Many of the 16th century settlers brought their pet canaries with them to Norwich, which they bred. By the early 18th century, canary breeding had caught on in the city and, soon, Norwich could claim its own breed – the Norwich 'plain-head' canary. Nesting boxes could be found in lots of bedrooms in the city, and the export of canaries to London became a profitable trade.

Beguinages were common in the Low Countries and, in 13th century Ghent, 1.7% of the population resided in a beguinage. Beguines' active involvement with the world involved charity work, manual work and teaching. There was almost certainly a Belgian influence on Norwich's beguinages; and it seems that a native of Bruges was instrumental in bringing beguinages to the city.