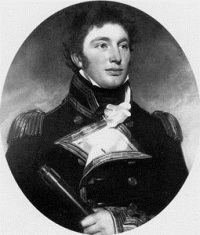 British naval captain, was the son of Dixon Hoste, rector of Godwick and Tittleshill in Norfolk. He was born in Aug 1780 at Ingoldsthorpe, and entered the navy in Apr 1793, under the special care of Lord Nelson, who had a lively affection for him. He became lieutenant in 1798, and was appointed commander of the "Mutine" brig after the battle of the Nile, at which he was present as lieutenant of the "Theseus." In 1802 he was promoted post captain by Lord St. Vincent.

During all his active career, he was employed in the Mediterranean and the Adriatic. From 1808 to 1814 he held the command of a detached force of frigates, and was engaged in operations against the French who held Dalmatia at the time, and in watching, or, when they came out, fighting, the ships of the squadron formed at Venice by Napoleon's orders. The work was admirably done, and was also lucrative; and Hoste, although he occasionally complained that his exertions did not put much money in his pocket, made a fortune of at least £60,000 by the capture of Italian and Dalmatian merchant ships. He also made many successful attacks on the French military posts on shore.

His most brilliant feat was performed on 13 Mar 1811. A Franco-Venetian squadron of six frigates and five small vessels, under the command of a French officer named Dubourdieu, assailed Hoste's small force of four frigates near the island of Lissa. The French officer imitated Nelson's attack at Trafalgar by sailing down on the English line from windward with his ships in two lines. But the rapid manoeuvring and gunnery of Hoste's squadron proved how little virtue there is in any formation in itself. Dubourdieu was killed, one of the French frigates was driven on shore, and two of the Venetians were taken. After the action, which attracted a great deal of attention, Hoste returned to England, but in 1812 he was back on his station, where he remained until the end of the war.

In 1814, he was made a baronet, and in 1815 he was knighted KCB. During the peace he did not again go to sea, and he died of tuberculosis in Dec 1828. He had married Lady Harriet Walpole in Apr 1817, and left three sons and three daughters. In 1833 his widow published his Memoirs and Letters

Click here for more detailed biographical narrative, and here for a charming vignette of his tour of duty off the Dalmatian coast.

An archetypal British naval super-hero to be bracketed with Nelson and Cochrane, Hoste was subsequently to be an inspiration for the latter-day fictional figures of Horatio Hornblower (principal character in C S Forester's many novels in the Hornblower series), Jack Aubrey (protagonist in Patrick O'Brian's 20 novels of the Aubrey-Maturin series), and Nathaniel Drinkwater (in Richard Woodman's 14 novels in that series).