Scandal of forgotten Prince George, Duke of Kent and his tormented lovechild

WHEN Andy Murray ended the long wait for a British men's champion at Wimbledon it was fitting that Edward, Duke of Kent, handed over the trophy. 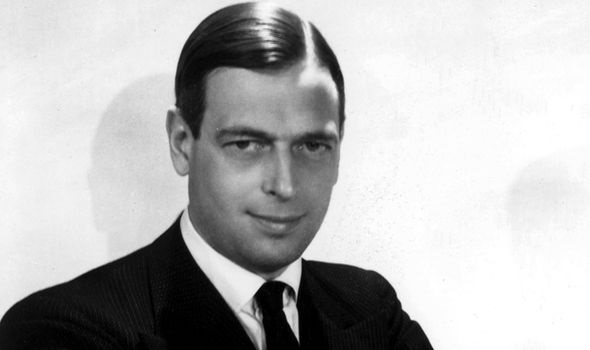 The Duke of Kent

George had a string of affairs, reputedly with both men and women, both before and after his marriage to Princess Marina of Greece and Denmark. It's reported that his long list of sexual conquests included writer Barbara Cartland, playwright Noel Coward and the banking heiress Poppy Baring.

But it was his long-time affair with a beautiful but wild socialite, Alice "Kiki" Preston that attracted most attention.

She was known as the "girl with the silver syringe" for her brazen drug habit. She was four years his senior and had worked as a cabaret dancer in her youth. By the time she met George in the mid-Twenties she was twice married.

From the outset Kiki captivated George, a handsome and dashing man who served in the Royal Navy. She is claimed to have introduced the impressionable royal to cocaine and heroin. Senior members of the Royal Family became so concerned that they insisted George break off the relationship but to no avail.

All would have been lost in the mists of time but rumours began circulating that George had sired an illegitimate child. Naturally suspicion fell on Kiki but royal author Christopher Wilson now claims the mother was Violet Evans. She was another attractive socialite, daughter of a Canadian coal merchant. She first met the Prince at a naval ball in Dartmouth, Devon, and later became part of his London party set. True to form, George pursued her relentlessly and it was no surprise when she discovered she was pregnant in 1926.

Even in the carefree Twenties this would have caused a scandal but a neat solution was found. Violet was officially dating a cavalryman who married her on the condition she had nothing to do with the illegitimate child. She was spirited away to Switzerland to give birth and the boy was put up for adoption.

To the relief of the Royal Family the dreaded scandal was averted and the fate of the child wasn't given much further attention. Meanwhile the unwanted baby was given a home by wealthy American publisher Cass Canfield and his wife Katsy who were then living in London. They named the boy Michael and sailed back to New York the following summer.

The cover-up did not, though, shame George into mending his ways. His career in the Navy was not a success, partly due to seasickness, and he became the first member of the Royal Family to become a civil servant. One of his roles was to inspect conditions in factories.

But he was immensely popular with the public. The Duke was drawn to flying, hunting and music and was also said to be "the best car driver and the best dancer in the British Royal Family". He once entered a tango competition under an assumed name and won.

His racy image only added to his charm and one wag of the time commented: "He is not safe in taxis with either sex." Reports of shocking behaviour continued after his marriage to Marina in 1934. Their union was seen as a final attempt to curb his excesses and the couple had three children, including the current Duke of Kent.

Yet it is said Buckingham Palace "lost count" of his indiscretions. Among George's male lovers was, it has been reported, the spy Anthony Blunt, while his mistresses included the singer Jessie Matthews.

At the same time in New York, Michael Canfield had the perfect start in life. His adoptive father was worth £20million and Michael wanted for nothing, including a Harvard education. He served in the US Marines during the Second World War and was wounded in action fighting the Japanese.

But he grew up damaged by the rumours over his parentage and the whispers that went on behind his back. There were constant references to the similarity in appearance of Michael and George. Perhaps to try to protect him - or the Royal Family - his new parents refused to tell Michael the identity of his birth parents. His marriage in 1953 to Lee Bouvier, the older sister of Jackie Kennedy, only heightened the interest and a move to England did nothing to quell the gossip.

Michael, who followed his adoptive father into publishing and had a stint working at the US Embassy in London, became increasingly unstable and turned to drink. Like most aspects of his life his marriage ended in failure.

Later there was a second wedding, to Laura Charteris, an aristocrat who is said to have been assured that Michael was indeed the illegitimate son of George. The source was George's brother, the Duke of Windsor, who was also struck by the family resemblance.

Laura later recalled a lunch with the Duke of Windsor which shed some light on the mystery of Michael's parentage.

Laura said: "The Duke never stopped staring at Michael. So much so that I asked: 'Is anything the matter?' The Duke replied: 'Yes. I am certain your husband is my brother's son.'" Even today it appears there is less certainty over the identity of Michael's mother, with some historians still insisting it was Kiki but whatever the truth, in this remarkable story of royal intrigue there are no happy endings.

Dogged by mental problems Kiki Preston drank a glass of milk then threw herself from a fifth storey window of the Stanhope Hotel in New York in 1946. She was 48.

Violet Evans, the other possible mother of Michael Canfield, gassed herself in 1951. She apparently never got over her grief at giving away her son.

Her former lover George, Duke of Kent, rejoined the services at the outbreak of the Second World War. This time he was in the RAF but his duties were relatively menial, involving inspecting bases and aircraft factories. Had the war not intervened he would have become the governor general of Australia, a most convenient posting.

In 1942 when his son, the current Duke of Kent, was seven years old, George was travelling to Iceland in a Sunderland flying boat. The plane crashed into a hillside in Scotland. George, who was 39, was killed along with 14 others on board. The exact cause of the crash has never been established.

It has been claimed that after his death attempts were made to airbrush the errant royal neatly out of history. But interest was revived in 2003 when his life was the subject of a documentary called The Queen's Lost Uncle.

Certainly, the contrast between George's scandalous behaviour and the exemplary life of the current Duke of Kent could not be more marked.

And what of the illegitimate son, the current Duke's half brother? In the winter of 1969 when he was 43 Michael Canfield boarded a passenger aircraft travelling from New York to London.

As the jet climbed Michael suffered a heart attack and died, his body poisoned by a cocktail of pills and alcohol. He went to the grave never knowing the remarkable story of his royal lineage.