Captain Lawrence came to my attention in a brief extract photocopied by my uncle Alexander (Sandy) Waddell and reproduced below: 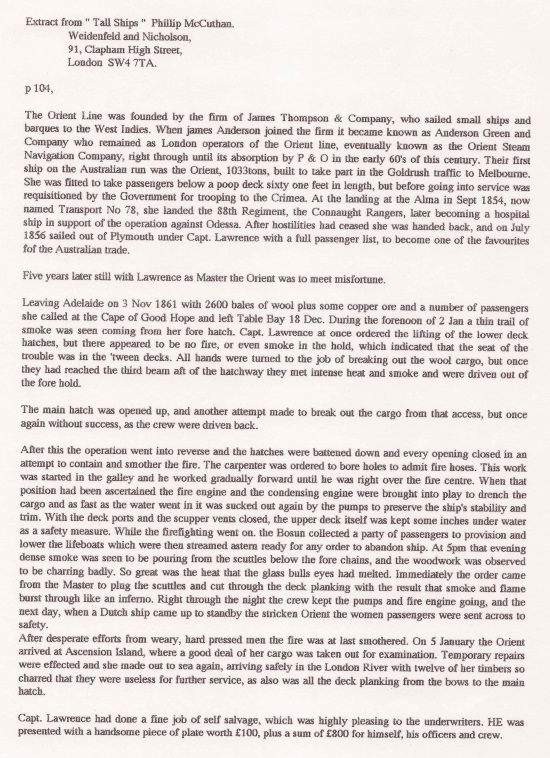 Sandy's background research of people and events of yesteryear was always exemplary, and this narrative of Captain Lawrence's consummate calmness and resourcefulness is excellently told. But two decades on, there is so much extra material to be found online, which integrates the story more deeply into the history of those times and with the chronicle of our family.

I'll work more or less backwards, from Lawrence himself, to the ship herself, to the stirring events of the fire, to the Orient line itself, in a series of extracts, though there will be a substantial degree of overlap. 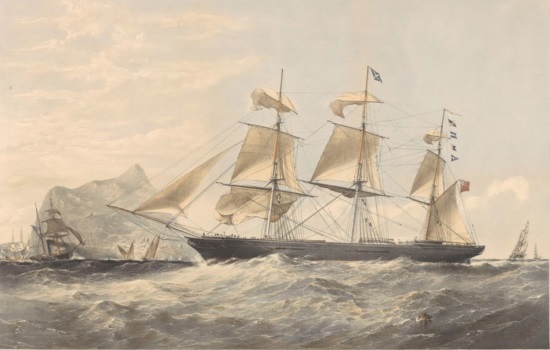 "Orient" (1853) 1033 tons, Thomas Goldsworthy Dutton
Arriving at Gibraltar with troops from the Crimea

Dutton (1820–1891) was an extraordinarily gifted and prolific maritime artist and lithographer – and what better subject, from such a heroic and pulse-quickening age? Wonderful further pictures by him of sail and steam can be found by googling the internet, though it must be admitted that his Wikipedia entry completely fails to do him justice.

Alexander Lawrence was Captain of the Orient for a total of five round trips from England to Australia, the last of which was marked on the return by the fire that he dealt with so expertly. These voyages have been tabulated, amongst much else, in a truly fascinating book: 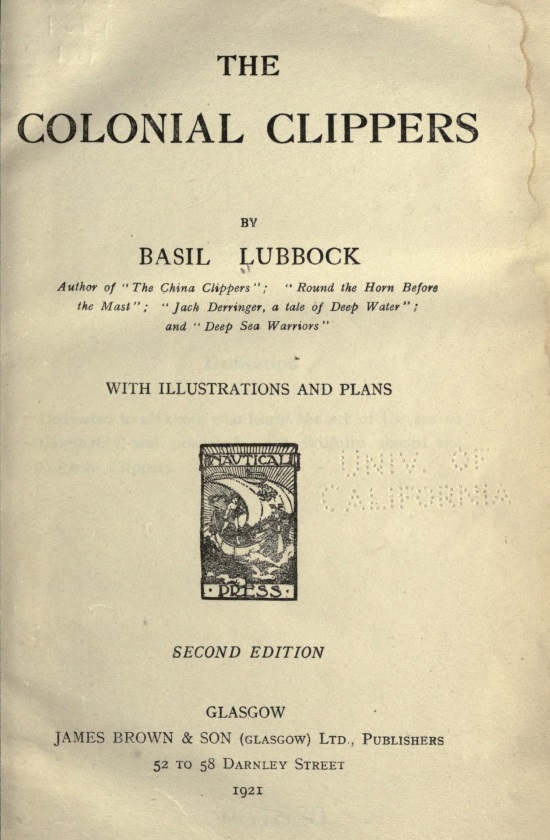 from which the following pages relating to the history of The Orient Line, and the Orient herself, are reproduced: 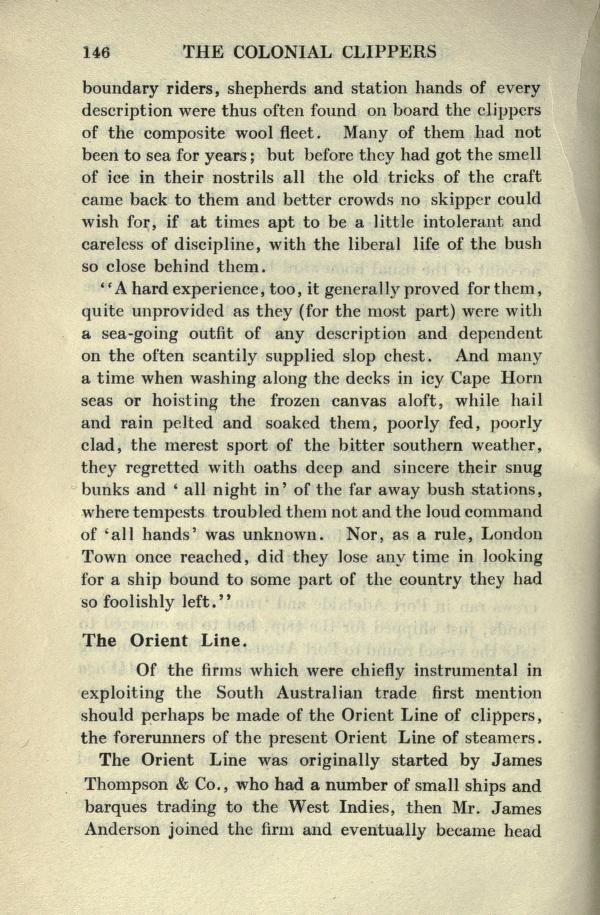 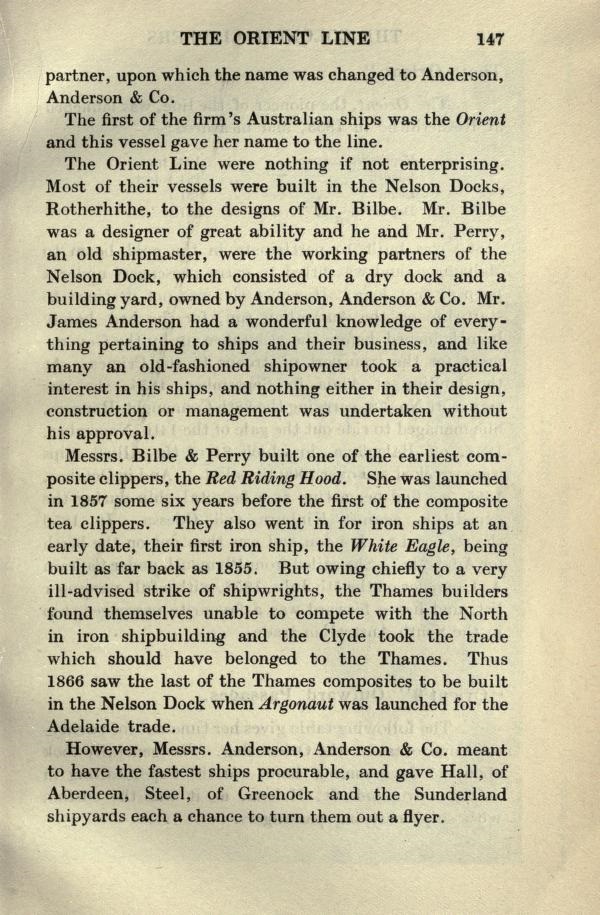 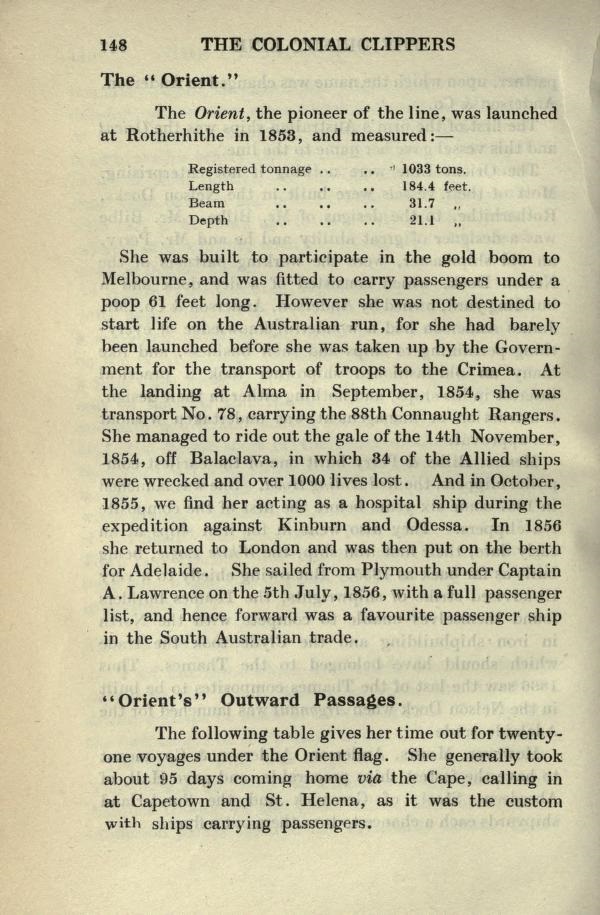 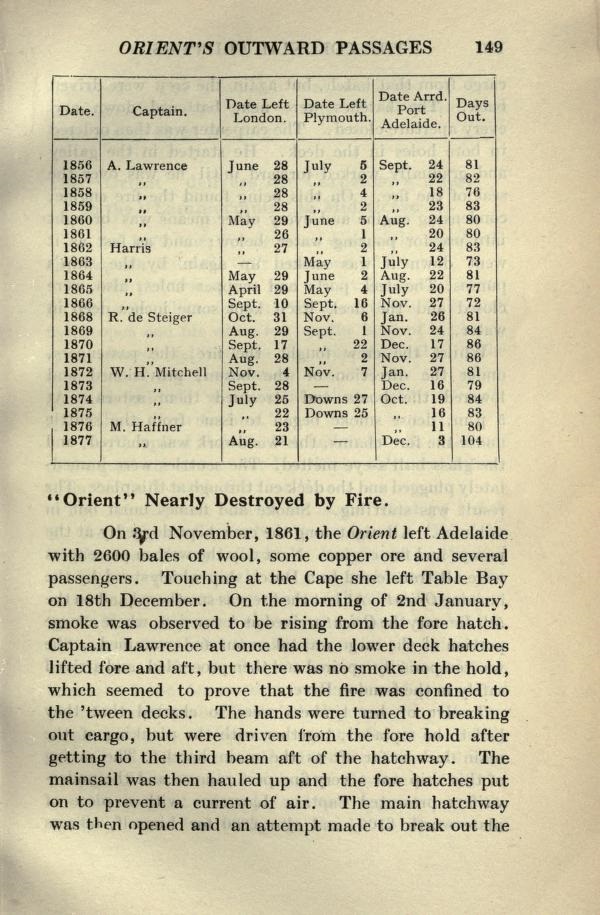 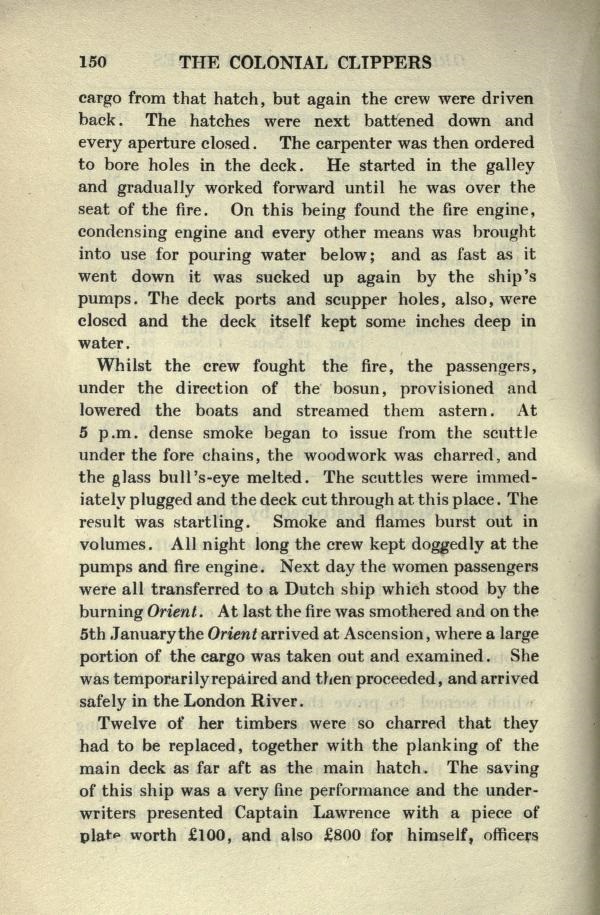 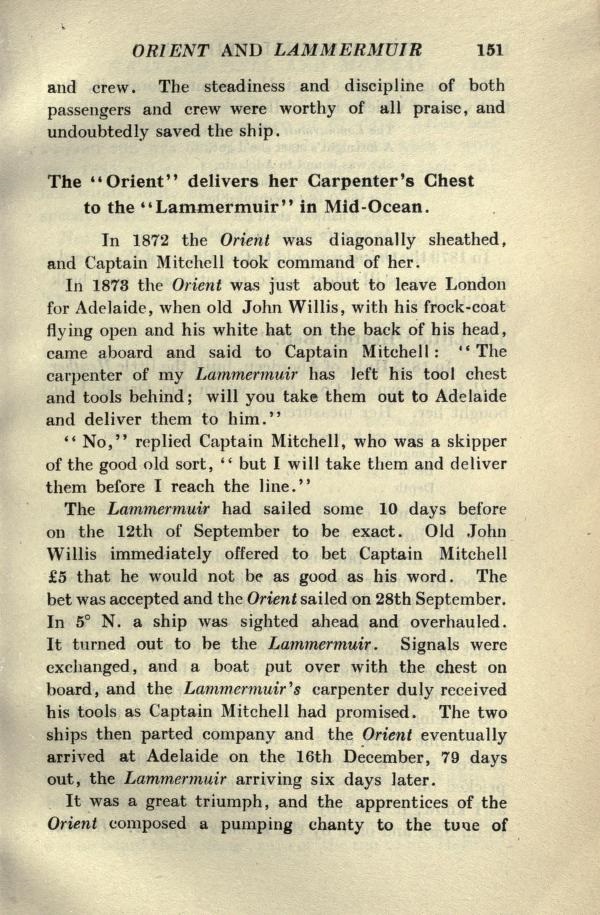 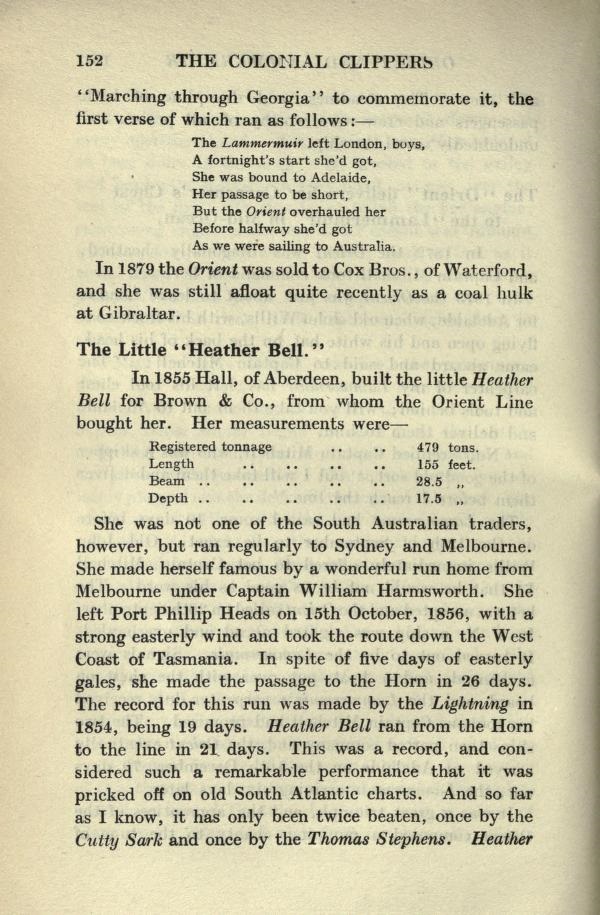 But, so far, I can find little more about Captain Alexander Lawrence himself, and his career previous to or subsequent to those five return trips to Adelaide in charge of the Orient. I'd welcome any further information!

What has emerged, however, is the issue of his Master's Certificate #394 from the Board of Trade's1,  2 office at Arbroath on 18 Sep 1851, though unfortunately there is no surviving image of the document. 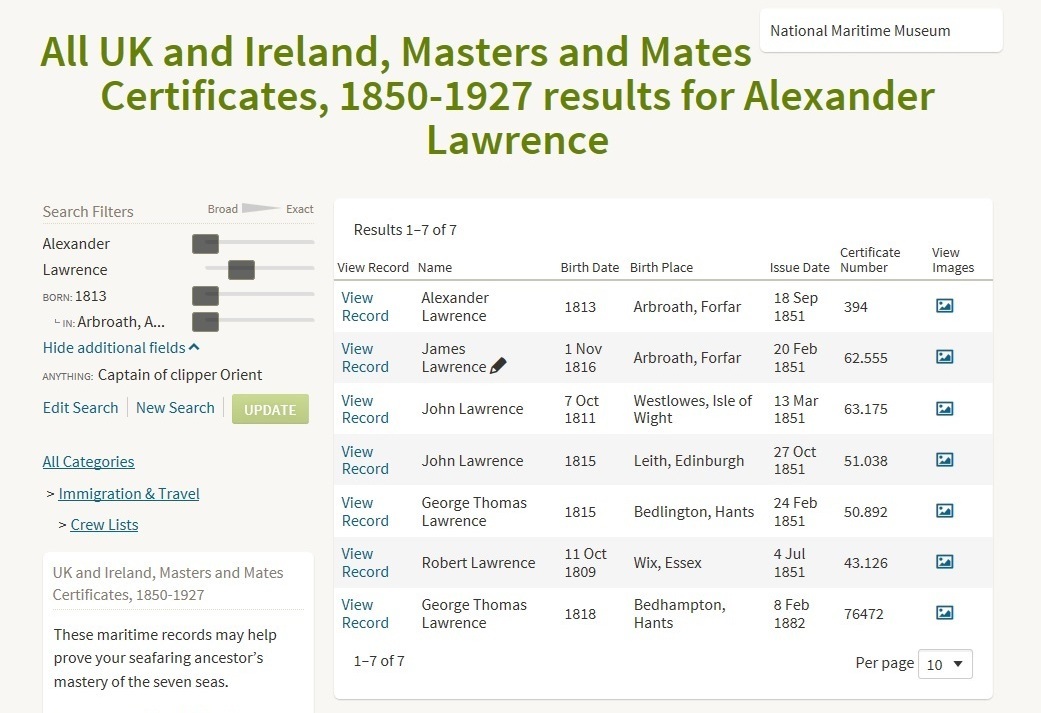 Could, perhaps, any of his three siblings have been amongst those such as James Lawrence of Arbroath and John Lawrence of Leith who also received their Master's Certificates that same year? To echo Thurber, "Dat, Ah don't know".

And for those, like myself, sometimes confused about the distinction between the master, the captain, the skipper, or the commanding officer, or so on, of a vessel in the British (or any English-speaking) merchant marine or Royal Navy, who might appreciate an attempt at clarification – even if it's wrong at least it's an attempt in the right direction:

I'm rather puzzled by the next picture, as it was painted in 1888 and depicts the Circular Dock, a feature of Sydney rather than Adelaide. The youthful Conder was indeed working in Sydney at the time, as an artist for the "Illustrated Sydney News", but Orient was no longer sailing to Australia at all, let alone to Sydney rather than Adelaide. And indeed his bohemian private life (he was busy in the bedroom with his landlady at that time), is hard to reconcile with any likely interest in merely maritime goings-on (nautical rather than naughty, fnarr fnarr). 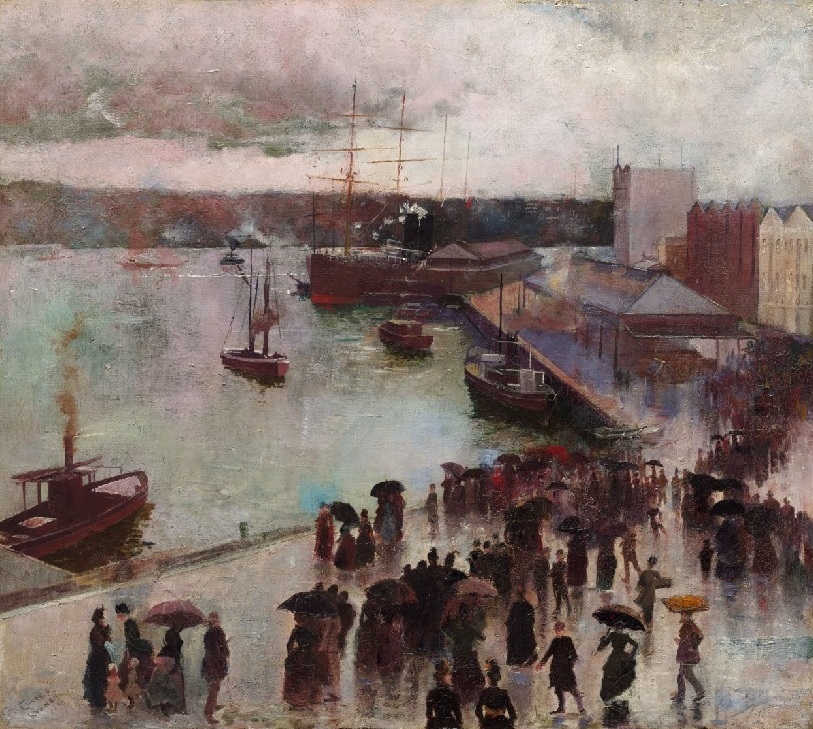 There are several excellent webpages that relate the story of the Orient Line and the Orient, most succinct of which is the following:

The Orient, pioneer of the Orient Line, was launched at Rotherhithe in 1853, and measured:

She was built to participate in the gold boom to Melbourne, and was fitted to carry passengers under a poop 61 ft long. However, she was not destined to start life on the Australian run, for she had barely been launched before she was taken up by the Government for the transport of troops to the Crimea. At the landing at Alma in September, 1854, she was transport No. 78, carrying the 88th Connaught Rangers. She managed to ride out the gale on the 14th November, 1854, off Balaclava, in which 34 of the Allied ships were wrecked and over 1000 lives lost. And in October, 1855, we find her acting as a hospital ship during the expedition against Kinburn and Odessa. In 1856 she returned to London and was then put on the berth for Adelaide. She sailed from Plymouth under Captain A. Lawrence on the 5th July, 1856, with a full passenger list, and hence forward was a favourite passenger ship in the South Australian trade.

She generally took about 95 days coming home via the Cape, calling in at Capetown and St. Helena, as it was the custom with ships carrying passengers. 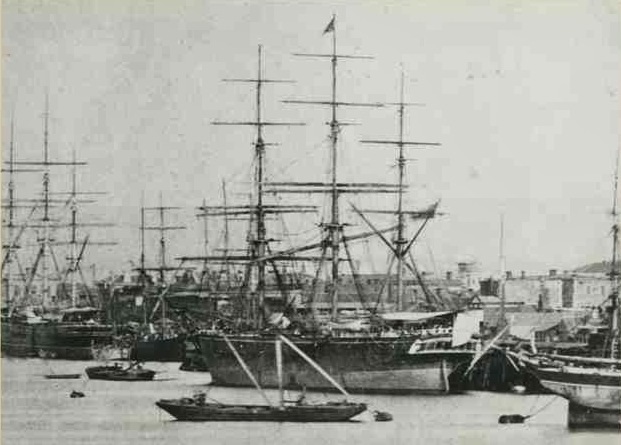 The Orient at Port Adelaide

On 3rd November, 1861, the Orient left Adelaide with 2600 bales of wool, some copper ore and several passengers. Touching at the Cape she left Table Bay on 18th December. One the morning of 2nd January, smoke was observed to be rising from the fore hatch. Captain Lawrence at once had the lower deck hatches lifted fore and aft, but there was no smoke in the hold, which seemed to prove that fire was confined to the between decks. The hands were turned to breaking out cargo, but were driven from the fore hold after getting to the third beam aft of the hatchway. The mainsail was then hauled up and the fore hatches put on to prevent a current of air. The main hatchway was then opened and an attempt made to break out the cargo from the hatch, but again the crew were driven back. The hatches were next battened down and every aperture closed. The carpenter was then ordered to bore holes in the deck. He started in the galley and gradually worked forward until he was over the seat of the fire. On this being found the fire engine, condensing engine and every other means was brought into use for pouring water below; and as fast as it went down it was sucked up again by the ship's pumps. The deck ports and scupper holes, also, were closed and the deck itself kept some inches deep in water.

While the crew fought the fire, the passengers, under the direction of the bosun, provisioned and lowered the boats and streamed them astern. At 5 p.m. dense smoke began to issue from the scuttle under the fore cabins, the woodwork was caharred, and the glass bull's-eye melted. The scuttles were immediately plugged and the deck cut through at this place. The result was startling . Smoke and flames burst out in volumes. All night long the crew kept doggedly at the pumps and fire engine. Next day the women passengers were all transferred to a Dutch ship which stood by the burning Orient. At last the fire was smothered and on the 5th January the Orient arrived in Ascension, where a large portion of the cargo was taken out and examined. She was temporarily repaired and then proceeded, and arrived safely in the London River.

Twelve of her timbers were so charred that they had to be replaced, together with the planking of the main deck as far aft as the main hatch. The saving of this ship was a very fine performance and the underwriters presented Captain Lawrence with a piece worth £100 and also £800 for himself, officers and crew. The steadiness and discipline of both passengers and crew were worthy of all praise, and undoubtedly saved the ship.