Perhaps the most persistently recurrent assertion about Sophia Emma Martin's adulthood is that she established a school for girls in North Bridge Road, that was in fact the first such in Singapore and quite possibly the whole Far East.

When Henry Ford remarked that history was bunk, he was immediately and forever misinterpreted – and derided – as meaning that the study of history was a useless waste of time. Revisionist historians now suspect he meant that so much of the historical record is utterly unsubstantiated. Where the records exist they've been falsified or corrupted, and where they don't exist the oral tradition is equally untrustworthy.

And ipso facto, by the same argument, maybe he never said it in the first place. But history is all we have to ground ourselves in some sort of narrative, to feel that we are part of an unfolding drama, to avoid the spiritual void of perpetually surfing the infinite Now.

So we have to work at it, and by golly I've grafted pretty hard at the provenance of this interesting factoid. It's not only significant in a wider sociological context, but also in that it corroborates the notion that she didn't just peg it in 1834 soon after her daughter Sara Sophia Whittle was born.

Let me first acknowledge that there is a very well documented counter-claim to priority:

In 1842, Maria Dyer, a British missionary with the London Missionary Society, started a school in a rented shop-house in North Bridge Road. It was a boarding school which gave orphan girls an opportunity to be educated for free. This was the first girls' school in Singapore and remained so for many years.

This was admirable in every way, and surprisingly similar in many respects – except that it was for orphan girls, and therefore probably for free. Sophia's venture was not so disinterestedly idealistic – after all, she herself had been orphaned in her teens, and had a living to make – quite possibly her husband Thomas Waterman Whittle was not earning a fortune as a surveyor. Her pupils were fee-paying – Boarders paid $12 monthly and Day scholars $5.

But this is not my real point: did her educational venture help us to get a fix on her longevity? I'd like to introduce several witnesses, with varying degrees of credibility.

The new "Scotch Church" was consecrated on 10 Sep 1838. A better organ was installed in 1843 or shortly afterwards, after which various new choral initiatives eventuated ...

"Then Mr. G. H. Brown came from Penang, and he initiated a choir of boys from Raffles School, and girls from the School in North Bridge Road kept by Mrs. Whittle, whose husband was a surveyor."

The next is very nearly as impeccable: 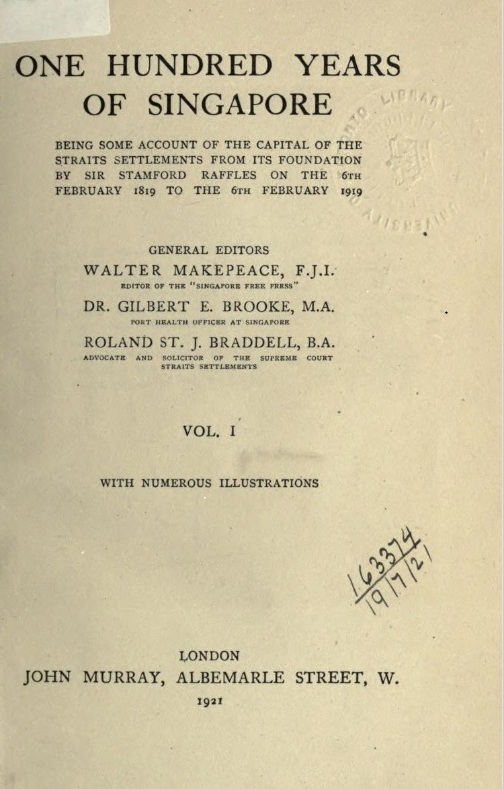 "[Dr Robert Little's] first wife was a daughter of Mrs. Whittle, who kept a school in North Bridge Road in 1837."

And the third, Uncle Sandy himself, an authority of supra-Gladstonian integrity, though one is never really sure about his sources:

[Sarah Sophia Martin's mother], whose husband was a surveyor, had established a school for girls in North Bridge Road in 1843, Boarders $12 and Day scholars $5 a month.

The missionary Walter Medhurst, who had married Sophia's widowed sister Elizabeth (Betty) in 1817, was an extraordinary linguist. It is said that he wrote more than 50 Chinese publications on both secular and evangelical subjects. And it was from him that Sophia Martin mastered Chinese (presumably the Mandarin variety) while she lodged in Batavia (Jakarta) with the Medhursts in the 1820s.

In 1829, however, she removed to Singapore, for reasons of health, and in 1832 she married Thomas Watterman Whittle, a surveyor, with whom she bore two children before he succumbed to the climate in 1834.

Not too many years thereafter, probably in 1837, as recounted above, she opened a "School for (Chinese) Girls" in Northbridge Road and ran it until about the late 1850's. The Chinese community was a very important sector of Singaporean commerce, and as she was bilingual in English and Chinese she must have had an important edge over any competitors.

Thanks to a recent contact from Sharon Casey, what also has now emerged, moreover, is that Sophia put her Chinese literary skills to great effect, by writing and publishing a treatise entitled "Three-Character Classics for the Instruction of Females", aka "Trimetrical Classics for Girls", in 1832 (some 5 years before she opened the school, oddly enough). Naturally, it was biased towards the importance of education, good conduct, and Christianity, but crucially it was composed in three-character (ie three ideogram / logogram) sentences, in the style of traditional Chinese early-readers for children.

She may well have written others, but this is still, I believe, regarded as the earliest extant Chinese-language publication in Singaporean history. Good for great-great-great Grannie! 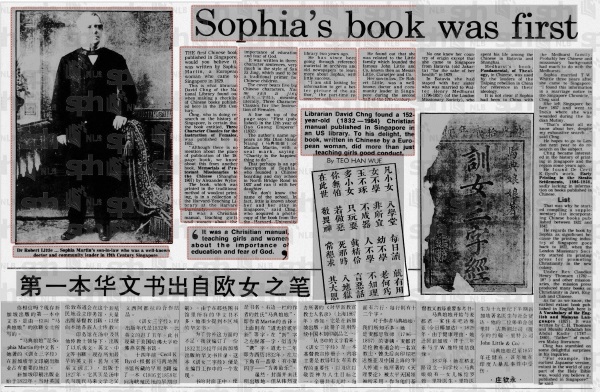 (Please click image to enlarge it)
© ornaverum.org All rights reserved