Over the past 15 years the Transgender Day of Remembrance, 20 November, has developed into an international day of action – or, at the very least, observance. Awareness of the worldwide extent of murderous attacks on transgender people had until recently been confined to the LGBT (Lesbian Gay, Bisexual and Transgender) community, but society at large is now slowly but steadily becoming aware of the sickening gender-motivated violence perpetrated not only in socially backward areas such as South America, the Middle East and the erstwhile Soviet Union, but often on our own doorsteps, geographically speaking.

The first such occasion that my wife Sonia and I attended was at the Dorset Gardens Methodist Church in Brighton, just two days after our daughter Andrea's funeral in 2009 at the Unitarian Church, only a few minutes' walk from there. And Sonia has faithfully attended, and participated in, that annual service, in the same friendly, welcoming Dorset Gardens venue, ever since – organised as always by members of the Brighton-based Trans Alliance. 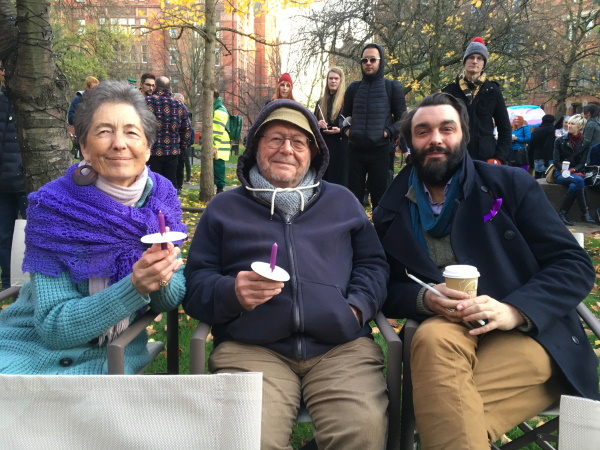 Following our move northwards in 2015, it took a considerable time to get our bearings, and it was not until 2018 that we started to attend the annual observance of TDOR in Manchester, held in the open air. Dusk is fast approaching so the candles, though yet unlit, are at the ready... 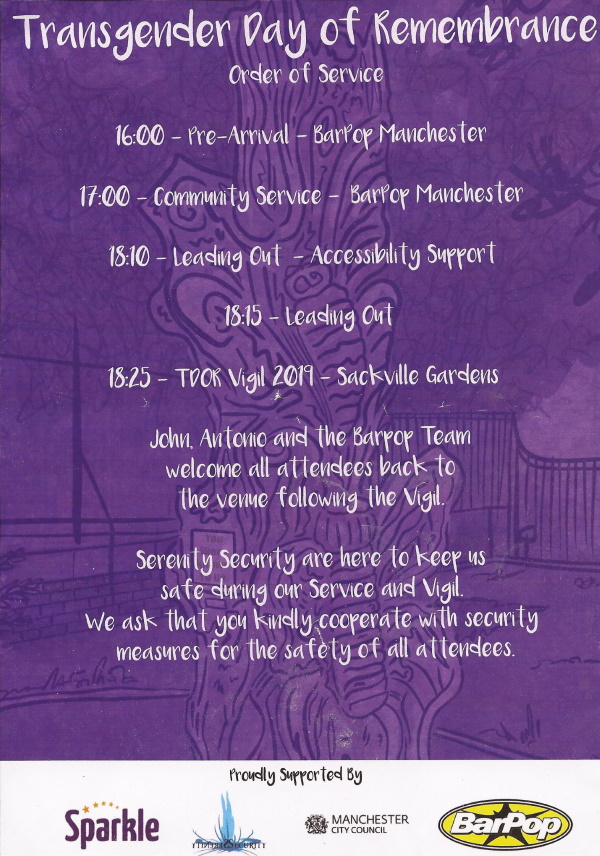 This year, the remembrancers foregathered for a Community Service in “Bar Pop”, just around the corner from Sackville Gardens, before the outdoor candlelit Vigil around the ornately sculpted Tree of Remembrance in the Gardens themselves. 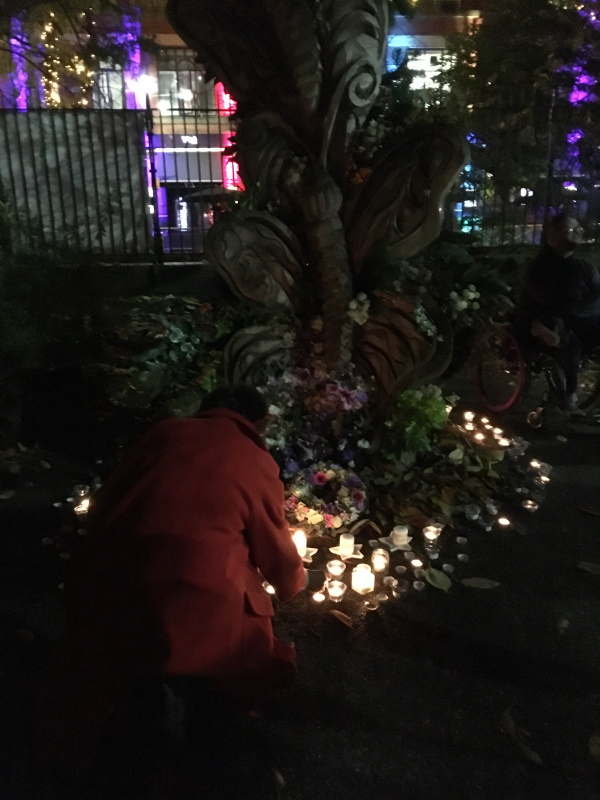 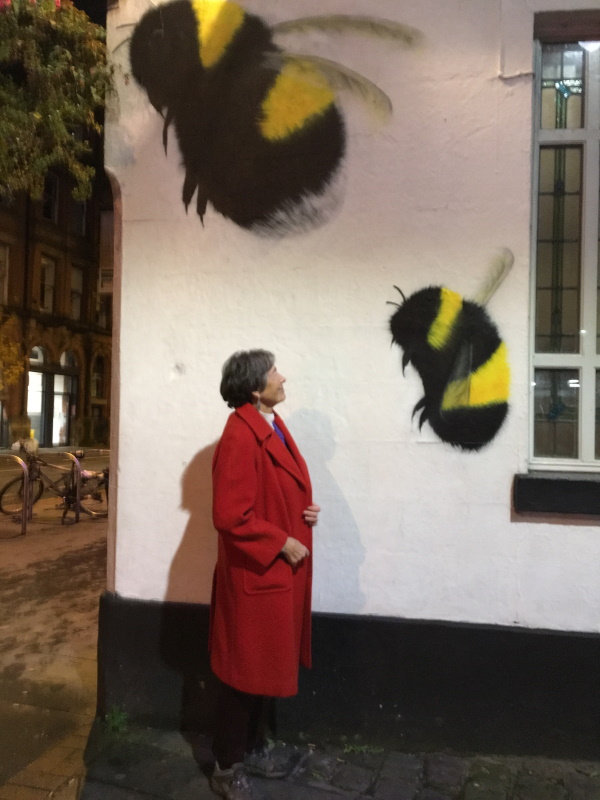 Admiring some Manchester Bees on the return journey
– Andrea would have loved them!

The Manchester memorial tradition recommenced in Sackville Gardens this last Sunday evening after a year out, due of course to Covid. It was attended by a great many participants, including (left to right) Joe, Sonia and myself. The placards had been prepared very professionally in advance, and naturally I chose the most challenging example on offer. 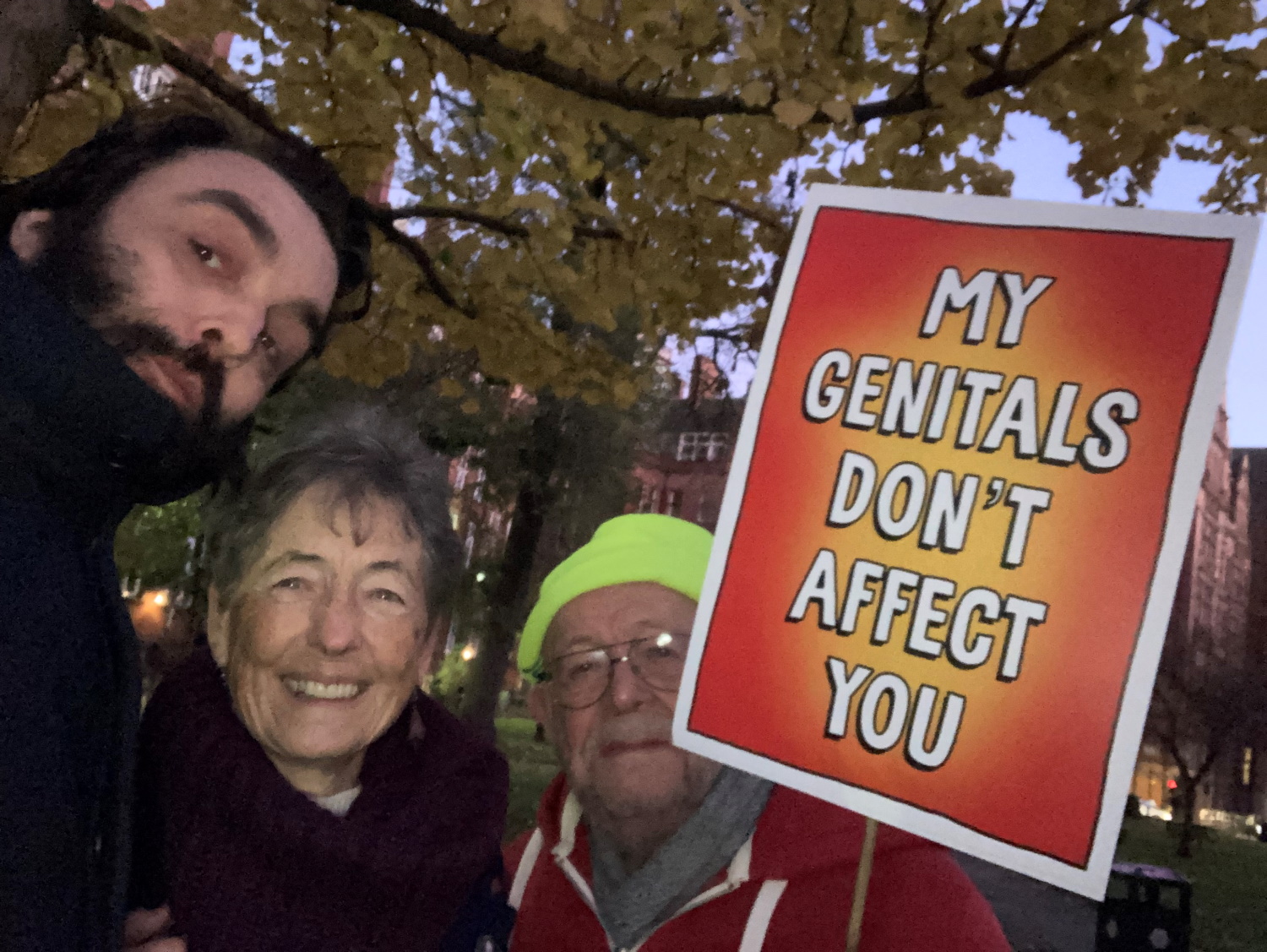 Proceedings were as usual, starting with a solemn procession around the city centre, followed by a reinvigorating visit to the ‘Churchill’, a gay bar in Canal Street, and finally the vigil itself back in Sackville Gardens.

This year, Sonia had brought her own candle, fitting neatly into a protective jam-jar – next year I must follow her example, as the breeze was no respecter of the occasion.

But sadly there were more names to be read out than ever before, and this in fact was the nub of my placard: an ever-increasing number of perfectly harmless – though possibly misguided – individuals who have undergone gender reassignment surgery are then regarded as intolerable threats to the machismo of psychopathic thugs.