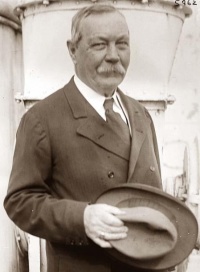 Sir Arthur Conan Doyle, possibly the most famous figure in English literature, began his multifarious career as a student of medicine at the University of Edinburgh from 1876–1881, and in fact successfully published his very first story during that time, but it wasn't until his medical practice in Southsea that he undertook the research for the publication in 1885 of probably his least-known work: his MD thesis on Tabes Dorsalis, describing a degenerative condition, also known as syphilitic myelopathy, resulting from untreated syphilis infection.

To view his actual manuscript, click below as appropriate:

(or if the links are broken, click here, here and here respectively)

As has only very recently been pointed out1, though his symptomatic description was no doubt excellent, his etiological understanding was completely flawed. In a story written 14 years later, he still hadn't understood the distinction between hereditary and congenital conditions – unsurprising, really, as Mendelian ideas of heredity had to wait a further 15 years until rediscovery.

In 1894, Dr. Arthur Conan Doyle wrote "The Third Generation," a short story involving the transmission of congenital syphilis from generation to generation. Analysts of his writings have interpreted the pathogenetic mechanism involved in modern terms: infection of mother by father and then transplacental infection of the fetus. However, a review of the contemporary literature and the history of the concepts of congenital and "hereditary" syphilis demonstrates that the late 19th-century understanding of the process involved a Lamarckian transmission of paternal infection, via the sperm at the moment of conception. It was undoubtedly this concept that Doyle learned in medical school in the late 1870s and that provided the background to his story.

In a fascinating article2 of literary historiography, Somasundaram illustrates the epidemic nature of GPI (General Paresis of the Insane) in nineteenth century England§ by means of three short stories by Conan Doyle, two of which refer to a congenitally inherited condition (including a third-generation case). Interestingly, he mentions grandiose delusions as being one of the principal symptoms of GPI, and I can immediately associate this with a recently-deceased individual plagued by back-problems, insufferably arrogant, hopelessly averse to medical treatment, and notorious for his dissipated life-style. And died of chronic liver disease (also an indicator) a decade short of the Biblical norm. Some who read this will know who I mean.