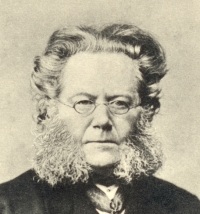 Henrik Ibsen was widely regarded as the most important dramatist since Shakespeare. First staged in 1881/2, his late nineteenth-century drama Ghosts, featuring second-generation congenital neurosyphilis, widely-condemned despite its studious avoidance of the S-word, was probably far more influential even than Conan Doyle's stories in bringing the epidemic to public attention in Northern Europe, and especially Britain.

Victorian prudery about sexual matters had managed to repress general awareness of the licentiousness which was probably no more or less prevalent than it had ever been, but the reaction against Ibsen's quite understated play was all the more extreme. As the late great Lord Macaulay said about Byron's allegedly scandalous behaviour, "We know of no spectacle so ridiculous as the British public in one of its periodic fits of morality."

But what the drama did do, quite unintentionally, was to crank up the stigma and odium attaching to any poor unfortunate who, quite possibly through no fault of their own, had "copped a dose of the pox" as the vernacular put it.

The plot of Ghosts has been sympathetically analysed by Hoenig in the context of the widespread ignorance about the nature and transmission of the disease which still prevailed right into the twentieth century. His article also introduces two further labels for the disease: meningoencephalitis and parenchymal disease.