The following registration of Thomas and Sophia's marriage on 23 Nov 1832 was very kindly supplied by Simon Potter: 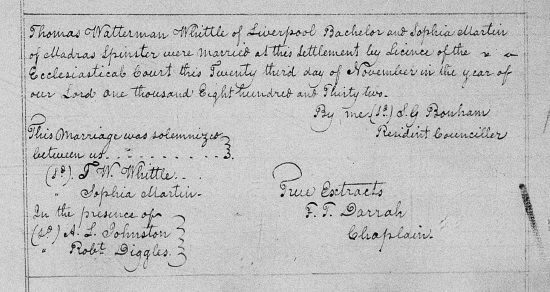 as was the following baptismal registration of their son Thomas Wat(t)erman Whittle on 9 Nov 1835, following his birth two months earlier on 8 Dec 1834:

In Simon's own words (incidentally revealing the depth of scholarly research required for serious genealogy – far beyond my own capabilities):

... I have a note that Sarah Sophia Whittle b.1833 had a brother, Thomas Waterman Whittle (named as his father). According to the St Andrews Singapore register of Baptisms, Marriages and Burials (typescript transcription in the Library of the Society of Genealogists) he was born on 8 Dec 1834 and baptised on 9 Feb 1835.

I had a search on findmypast and attached is the1835 Singapore baptism entry from the British Library. This is a pleasant surprise to me; I had assumed that the original Singapore BMDs had been lost in the 2nd WW and that the transcript in the Society of Genealogists (with incomplete info) was our only source; clearly not. FMP have done a great job of digitising the BL's Bengal, Bombay and Madras registers; I didn't know they'd done Singapore as well.

[It] says Sophia is a widow, suggesting that TWW sr had died since [fathering] TWW Jr and that she was still alive 2 months after the birth [it doesn't definitely say that she's alive, but nor does it say she's dead.]. It's possible that the clerk writing the register was confused and that TWW Snr was extant as a widower, but that's a bit of a stretch.

I have no further information about him and whether or not he survived infancy.

Shortly afterwards, however, he retrieved the following evidence of TWW Jr's death at the age of 14 in 1848: 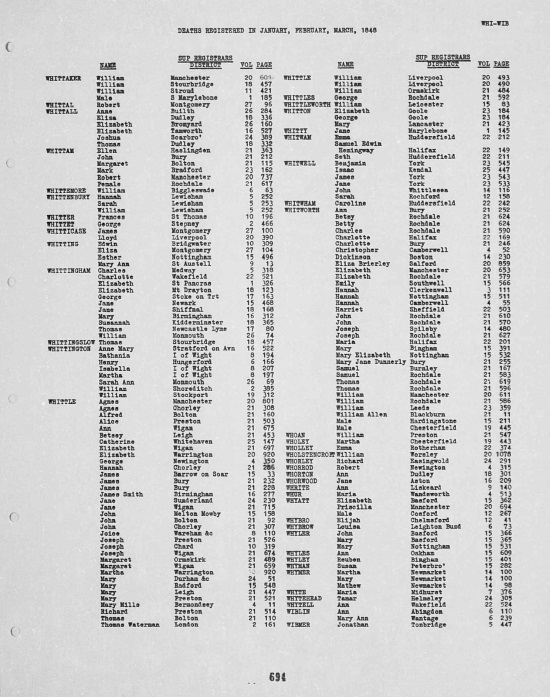 In his own more cautious way of putting things (GRO = General Register Office, which maintains the national archive of all births, marriages and deaths dating back to 1837):

Exhibit 2 attached is the GRO Q4 1848 Deaths Index which has the death of Thomas Waterman Whittle registered in the city of London. Unlike the later indexes if doesn't give an age of death. Your correspondents who are interested in this family could apply for the death certificate which might give further information.

It could be TWW Sr death registered in London 14 years later;

it could be someone else entirely.

Tellingly, there was a major epidemic of cholera in London during 1848-49, which could well have seen off the unfortunate boy.

A couple of further points may also be made. Firstly, the godparent Harriet Whittle was presumably the sister of Thomas Waterman Whittle Sr. Secondly, the godparent Gordon Forbes Davidson was presumably the JP of that name, whose wife Sarah née Whittle was probably another sister of Thomas Waterman Whittle Sr.

Davidson (1807 – 17 Oct 1865), not to be confused with a son of the same names, appears to have led an interesting and varied life in the Far East, including Singapore and Australia, as per the following references.