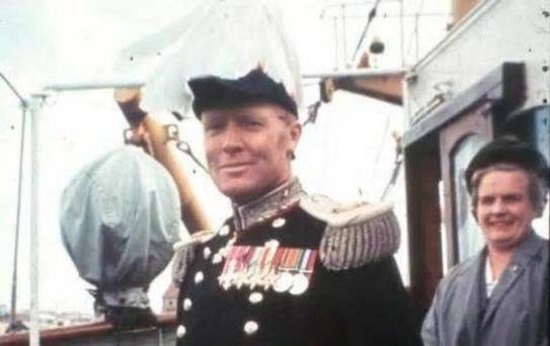 Cosmo Haskard arriving at Port Stanley to take up his post as Governor of the Falkland Islands in 1964 with his wife Phillada. Photo: John Leonard and Jane Cameron National Archives

Cosmo Haskard, who died at his home at Tragariff, Bantry, Co Cork, at the age of 100, was Governor of the Falkland Islands in the 1960s when the British government under Harold Wilson was attempting to hand the islands over to Argentina, which had long claimed sovereignty over the remote territory in the South Atlantic Ocean.

Haskard, who worked for the British Colonial Service, was attracted to the position of Governor because the Falkland's remoteness reminded him of his childhood summers in west Cork and there was ample opportunity for sailing, fishing and other outdoor pursuits.

As relations between his bosses in Whitehall and the 2,000 islanders deteriorated, Haskard made no secret of his loyalty to the islanders and at one time threatened to resign after a particularly acrimonious encounter with the hard-drinking British Foreign Secretary, George Brown.

Sir Cosmo Dugal Patrick Thomas Haskard, KCMG, MBE was born in Dublin on November 26, 1916. He was the only son of John McDougal Haskard, a brigadier general in the Dublin Fusiliers and his wife Alicia 'Lily', who was a member of the Hutchins family of Ardnagashel, a west Cork 'big house' which survived 'The Troubles' of the 1920s unscathed, but was destroyed by an accidental fire in 1968. His father met Lily while stationed with the Dublin Fusiliers in Fermoy and Buttevant in Co Cork. He remembered her as "a wonderful horsewoman" who would sometimes go on horseback from Ardnagashel, near Glengarriff, to their cousins in Ardtully Castle in Kilgarvan, Co Kerry.

However, while he was still very young, his mother became ill and spent much of the rest of her life in nursing homes. As a child, Cosmo travelled with his father to Egypt and China.

At the age of 11, he was sent to Cheltenham College, but spent his summers in Ireland with his maternal grandmother at Reendesert Lodge and close to a house which his Haskard grandfather had built at Tragariff.

"When I came back from China, I fell in love with this part of the world," he told Jane O'Keeffe in Voices from the Great Houses. "It was a wonderful place for a schoolboy because of the hill climbing, sailing, fishing and all the other country pursuits."

In his 90s, he recalled the heartache he felt on the return journey from Cork to Fishguard. "We used to drive up to Penrose Quay. When the very grand Innisfallen arrived on the scene, we couldn't get over the splendour of her, after the old Ardmore and Kenmare which had previously serviced the route...I didn't want to go back to school." He graduated from Sandhurst military academy but failed a medical examination to enter the British Army and instead went to Cambridge where he graduated with a degree in modern languages. He joined the Royal Irish Fusiliers on the outbreak of World War II and was posted to Tanganyika (Tanzania), Ceylon (Sri Lanka) and Burma (Myanmar).

After the war, he spent time in the colonial service in various parts of Africa with his London-born wife Phillada. He became Governor of what later became Malawi, but following self-government there, he returned to London and was posted to the Falklands in 1964 where he remained until 1970, during a period of rising tensions with Argentina. These included the Belgrano, the cruiser which was later sunk during the Falklands War, training its guns on the island from just outside the three-mile limit.

Haskard was conferred with a knighthood in the 1965 New Year's Honours list.

On visits to the Foreign Office, he was reminded of his duty to carry out government policy, which involved pulling out of territories 'east of Suez' and of Britain's growing trade links with Argentina. Lord Chalfont, whose visit he organised to the islands, returned to London reporting: "I do not believe that the Falkland Islands can continue to exist for many years as they are presently constituted."

However, Haskard constantly reminded his masters in Whitehall of the necessity of keeping the islanders informed of proposed changes in their status and of their wish to remain part of 'the empire'.

He spent his last year on the island supervising the transfer of Brunel's iron steamship, SS Great Britain, which had been abandoned on a beach outside the capital Port Stanley in 1937, back to Britain, where it was restored and is now a tourist attraction in Bristol.

In 1972, he returned to west Cork with his wife to settle in a house built by his own father on his retirement from the colonial service. He was appointed a member of the Beit Trust, set up by Lord and Lady Beit of Russborough and became involved in the local community.

He was deeply interested in family history and believed that his mother's ancestral home had not been burned in 1922 because the family had deep roots in the area and the local community.

When Argentina invaded the Falkland Islands in 1982, he offered his services to the Foreign Office, an offer which was declined.

However, he and his son Julian, who later emigrated to Australia, did meet with Sir Peter de la Billiere, Director of Special Services, to discuss the likely conditions British troops would encounter when they arrived in the Falklands to retake the island for Margaret Thatcher's government. He was also widely in demand by journalists, most of whom had never heard of the Falkland Islands until the conflict broke out following the sudden invasion.

In his latter years, he enjoyed gardening and was unsentimental about the future of Tragariff.

"We don't live in a daydream and we know that it may not be possible to have a member of the family live in this house again," he told Jane O'Keeffe in the 1990s.

Sir Cosmo Haskard, who died on February 21, is survived by his wife Phillada and his son Julian.