The Hutchins Family and Ardnagashel 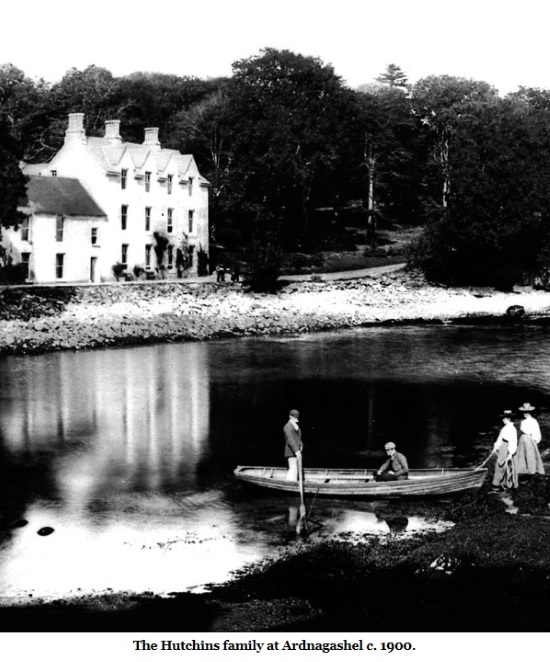 The genealogy of the Hutchins family prior to Thomas Hutchins (1735 – 1787) at first sight seems very sparsely documented, but we know from Sir Cosmo Haskard's account published in Voices from the Great Houses: Cork and Kerry, Jane O'Hea O'Keeffe; Mercia Press, 2013 that a Richard Hutchins arrived in Ireland at some point between 1641 and 1653, during the Irish Confederate Wars1,  2,  3, and served under the 1st Earl of Orrery.

Thereafter he settled at Blackrock, a very short distance down the coast from Bantry, and at some point during the reign of William III (ie 1694 – 1702) he was given the position of Poll Tax Commisioner for the area. By this time he would have been in his mid-seventies, not an age (even today) associated with such a demanding occupation.

Sir Cosmo also refers to Thomas Hutchins, wife of Elinor, as being Richard Hutchins' great-grandson, and so we have two intervening generations to account for. Sidelining the (important but geeky) quest for source-material, their details, together with those of succeeding generations, are tabulated in the Generation Table below, following a brief survey of the various locations of interment used by the family.

Rather a pawky metaphor, but with a certain point. Back in the 1960's and 70's when IBM ruled supreme, a GDS meant data that got a new identity at each update, so that an audit trail of datasets was established automatically. Well, isn't that just what a well-maintained graveyard provides? A temporal sequence of identifiably related individuals embodying essential personal information. Perhaps it's far-fetched, but now that interment is old hat, how will future generations connect with us? Maybe it is simply our conceit that they would want to do so.

Hoots toots. In the present context, I have been extremely fortunate to have got off to a flying start with Eliane Zimmerman's scrupulously-researched webpages

There are in fact three graveyards to be considered, and in the Generation Table below I've tried to indicate which of them is the location for each individual entry.

The Killeen (*), in the Ardnagashel West estate

Until recent times, and certainly when the Kaulbacks owned that estate, the Killeen was well-kept, but with many subsequent changes of ownership it has now degenerated into a desperate condition. Fortunately, the weatherworn inscriptions were transcribed in Aug 2001 (thanks to Richard and Madeline Hutchins, Arethusa Greacen and Elizabeth Jones), as revised in Dec 2006 (thanks to Markus Baeuchle and Tony Millward).

The following photographs from some years ago show the Killeen still in a reasonable state of preservation:

But what exactly does the word 'Killeen' actually mean? Is it a proper noun or a common one? In fact it's an anglicised version of the Irish Gaelic Cillin, meaning a graveyard, generally located at the boundary of an estate, property or community, reserved for unbaptised children, strangers to the area, or unrepentant murderers!

In the present context, as the Hutchins family was of the Church of Ireland persuasion, a minority within the generally Catholic community, their family burial ground was most probably called a Killeen simply to denote that marginal religious status. 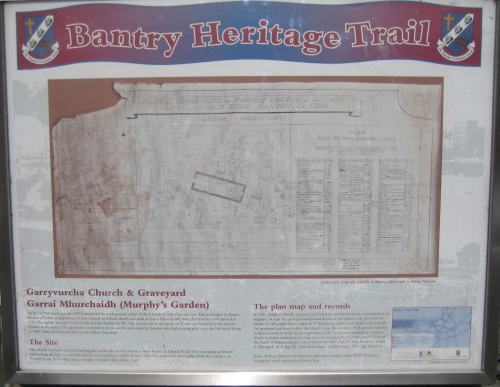 There is an engraved plaque at the Ardnagashel killeen, saying that Ellen Hutchins (17 Mar 1785 – 9 Feb 1815) is buried in Bantry Old Graveyard, and according to further details in the Garryvurcha Index at the Bantry Library, she is buried in an unmarked grave near the south wall of the (ruined) church here.

There are two other graves of family interest here: one of Capt Arthur Robert Camac Newburgh of the Life Guards, died 29 Oct 1875 aged 77, and the other of Thomas Newburgh, his son, died 9 Apr 1885 aged 27. 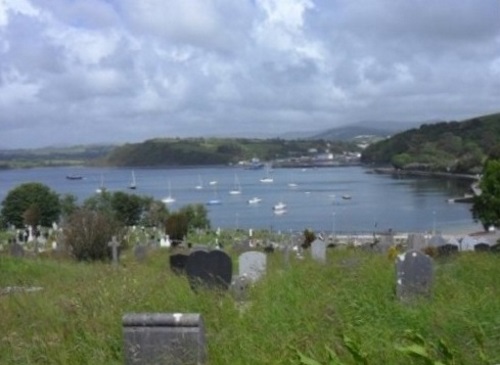 The great majority of graves here are of the Catholics of Bantry, of course, but there is a modest area, possibly unofficially designated, for the dwindling English – or maybe simply Protestant – minority in the community. It is set quite high up and has a superb view of the harbour.

There are several more recent Hutchins here, as indicated below, plus various recent members of the Bantry House family (Leigh-Whites and Shelswell-Whites), and the Bryce family, as will be detailed elsewhere in the Bantry Connection.

Also of course, various émigré stalwarts such as Patrick Haddon, Arthur Tisdall, Bert Woolley, William Bridges-Adams and his wife (plus son and daughter-in-law), Edgar and Millie Battle, and others unfamiliar to me.

I'm very grateful to Eliane Zimmermann for the use of the Hutchins photographs at various places in the table below.

In passing, we may note that by the beginning of the 19th century the Hutchins family owned prodigious quantities of land, quite apart from the estate at Ardnagashel. During the course of that century, however, they started to sell it off, as itemised below, though for what reasons one can only guess – click here for some very interesting background to estate ownership in Ireland during that era.

Richard Hutchins of Blackrock, near Bantry, county Cork, was appointed a Poll Tax Commissioner by William III. In 1759 his great grandson, Thomas Hutchins, married Elinor, daughter of Arthur Hutchins of Cregane Castle, county Limerick, and they had 21 children. Their descendants were residing at Ardnagashel, near Bantry, by the beginning of the 19th century.

The Hutchins estate, amounting to 4,905 acres held in fee in the baronies of Barretts, West Muskerry, Orrery and Kilmore, Fermoy, West Carbery (East), was advertised for sale in June 1871.

Emmanuel Hutchins was the owner of over 7500 acres in county Cork and some property in county Westmeath in the 1870s.

In November 1887, Arthur and Elizabeth Hutchins offered property at Ballylickey, Bantry, county Cork and in Dublin city for sale in the Land Judges' Court. Two lots of this were sold to Mary Anne Murphy in June 1888.

The interest in other property owned by Arthur Hutchins was sold in July of that year. The purchasers included Samuel Hutchins of Charleville, a Mr. Hutchins of Dublin and H. Payne of Beechmount, Upton, county Cork.

In 1906 Emmanuel's brother Samuel Hutchins still owned over 500 acres of untenanted land in the parish of Kilnamangh, barony of Bear.

Members of the Hutchins family were still residing in the Bantry area in the mid 20th century.

This section heading has already been used in a good many other family or social Connections, and perhaps it needs to be defended, as "rude" has a variety of meanings (such as poets and cruciverbalists, both setters and solvers, rejoice in). The phrase itself, as any fule kno, was used in the famous Elegy in a Country Churchyard, but the implication, to modern ears, is puzzling. Shakespeare's "rude mechanicals" were surely rude in a rather different way, and the notorious Lenny Bruce, or Jimmy Carr, were or are rude in quite another respect. And if my GP tells me "Mr Waddle, I must admit that you're in the rudest of health, despite your age and bibulosity", I'm well pleased.

I think that Gray used this many-faceted word to imply that the forefathers in question had flourished in a simpler, perhaps almost Arcadian, or at least Augustan, age and indeed were rather lucky to have done so. And that's more or less what I mean too, though the Tudor and Jacobean eras were of course far from idyllic.

One distinguished individual with whom we can start the ball rolling, was Sir George Hutchins, the eminent lawyer, jurist and parliamentarian.

The earliest known origin of the Hutchins family was Saltash (on the River Tamar in S Cornwall), though there were collaterals in Barnstaple and Georgeham (on or near the River Taw in N Devon); both connections are outlined below.