Old unhappy far off things and battles long ago 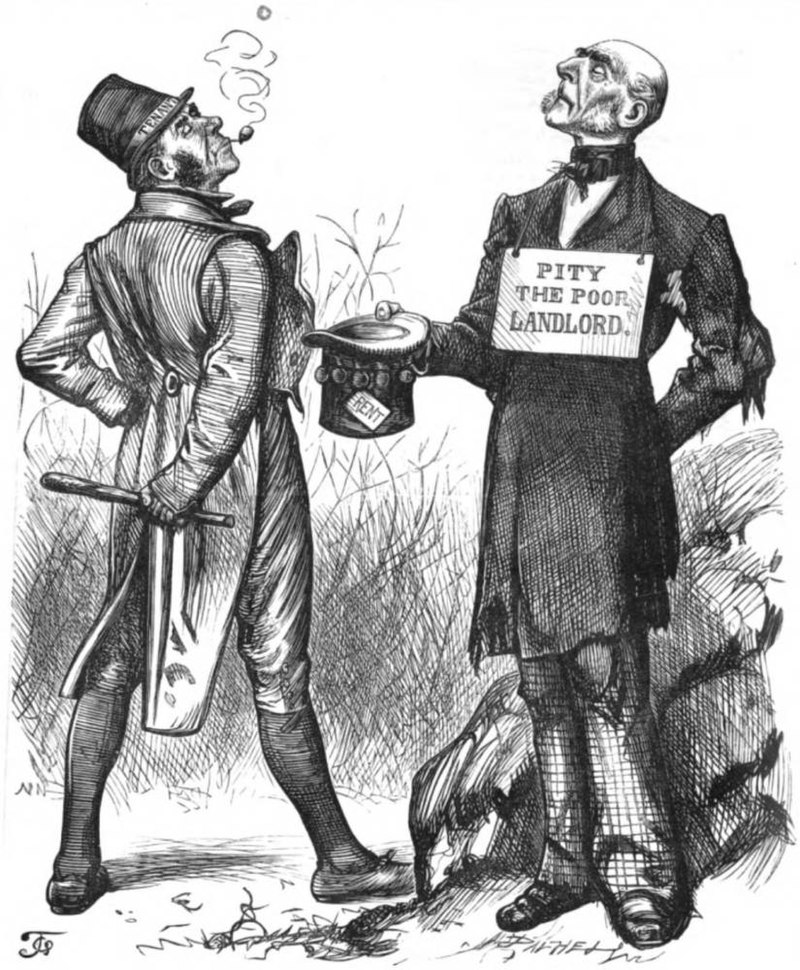 Since the time of (at least) Mary Tudor, England had regarded Ireland as up for grabs (to put it crudely but accurately). And though Mary herself was Catholic most if not all of English settlers in Ireland from that time onwards were Protestant.

The rights of the Catholic populace were generally ignored, and if necessary trampled on. By force majeure the landowners were mostly Protestant and their tenants were almost invariably Catholic. The tenant farmers had to pay their landlords rent for the privilege of working the land that had historically been theirs anyway.

And the tensions between tenants and landlords became increasingly bitter as the Victorian era drew on, culminating in the Land Wars of no specific dates, as the following episode (for the details of which I'm extremely grateful to Brian Phelan and Madeline Hutchins) dramatically illustrates.

The central figures are a young Irishwoman Hanora McCarthy (1 Nov 1861 - Mar 1919) and Samuel Newburgh Hutchins (16 Apr 1834 - 22 Apr 1915), at that time the owner of Ardnagashel House. An unfortunate collateral casualty (or perhaps victim would be a much better word) was a young man from nearby Bantry by the name of Downey.

On the night of 6 Oct 1880, a landlord from Bantry named Sam Hutchins was travelling with his assistant, a lad named Downey also from Bantry, on the road from Drimoleague to Bantry.

They were travelling in a back-to-back trap but instead of the tradition of master driving and lad sitting at the rear, Downey was driving up front, with the master Hutchins at the rear. At Inchingearig Bridge a man dressed in the black cloak of a woman was waiting.

As they passed the gate to Ilen Lodge, which was the McCarthy home, the man in black shot dead the driver of the trap, believing him to be the landlord Hutchins. Hanora was nearby and saw and recognised the gunman as he fled. Sam Hutchins managed to control the horse which had bolted and kept going until he reached Aughaville Police Barracks about 2 km further on.

Hanora was now in a predicament. She faced interrogation by the police and did not want to reveal the gunman's identity. Soon after the incident she emigrated to Australia.

Since all postal correspondence addressed to her family was handed over first to the police, as they were still trying to locate her, a message was sent to her brother Daniel who had emigrated to Australia some years earlier, to advise her to leave Australia and travel on to her sister May in the USA. She was also told to cease corresponding with her family in Inchingearig, as the police were persistent in their attempts to locate her…

Madeline Hutchins, the great great granddaughter of Samuel Newburgh Hutchins, was told of this episode by her late father Richard Newburgh Hutchins. As is not at all surprising she knows less of what happened in Brian Phelan's account than of what her father knew.

I am a descendant of Samuel Newburgh. He is my great great grandfather... Yes, I have been told of this story by my father, Richard Newburgh Hutchins... but I did not know about a witness or that the gunman was in a woman's cloak. I certainly had no knowledge of the story of the witness's subsequent actions and life.

I know that the story resurfaced in the local press in the mid twentieth century, with the suggestion that Samuel had a tip off of the attack and therefore swapped places with Downey. This caused huge grief to my great aunt Dell, a daughter of Samuel Newburgh, and I have a letter that she wrote to my father about it, and I think that she wrote to the newspaper about it...

I have seen letters and documents in the family archives of the support that Samuel Hutchins gave to the Downey family... I don't have easy access to the archives just now to look for more information there, but can get to this later in the year. Searching online now I have found reports of the incident from newspapers of the day, including... the Irish Times on 18 October 1880, in the People's Advocate on 23 October 1880, and in the Londonderry Sentinel on 19 October 1880.