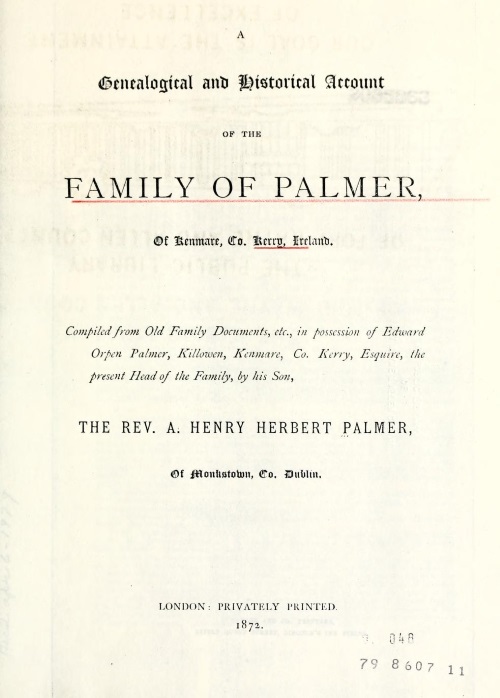 This is one in a series of articles about prominent British and Irish field-bryologists of the past. The author would be very pleased to learn of any information which supplements its content.

A Social and Biographical History of British and Irish Field-bryologists is also available on-line at britishbryologicalsociety.org.uk/

Ellen went to Dublin to complete her education, but fell ill, and a family friend - the physician and bryologist Whitley Stokes (1755-1831, who contributed mosses to Smith and Sowerby's English Botany) – treated her and enthused her with a passion for botany. After returning home to Ballylickey, Hutchins began to collect algae, lichens and bryophytes, and began corresponding with Dawson Turner, who helped her by identifying her plants and sending her books.

Her bryological discoveries were published in the later volumes of Smith and Sowerby's English Botany (1790-1814), and in Hooker and Taylor's British Jungermanniae (1816). Around Bantry Bay she found nearly half of the species featured in British Jungermanniae. For example, the first species in the monograph is Jungermannia (Jubula) hutchinsiae, which Hutchins added to the British and Irish list.

Ellen Hutchins was born on March 17th 1785, the fifth of six surviving children of Thomas Hutchins (1735-1787, J.P. and Protestant of Ballylickey House between Bantry and Glengarriff) and Elinor (née Hutchins, 1743-1814). Thomas's business interests lay in farming and fishing. Thomas's own father was also Thomas (died 1754) of Ballylickey, and his father was Theophilus Hutchins of Cametringane, Castletownbere, Beara, west Cork. Elinor Hutchins was a third cousin to Thomas, and the only child of and heir to Arthur Hutchins of Thomastown and Cregane Castle, Limerick.

Ellen's grandfather Thomas married Katherine Harman (1709-1804), daughter of Beversham Harman of Laharen, and Margaret (née Palmer). Margaret was a daughter of the Reverend Thomas Palmer (?1644–<1702), who was a great-great-grandfather of the botanist Thomas Taylor M.D. (1786–1848). Thus, Ellen Hutchins and Thomas Taylor were cousins.

Ellen's youngest brother Samuel (1786-1862) married, and his daughter Louisa married a relative of Florence Nightingale (1820-1910). Alicia, another daughter, wrote a memoir of her aunt Ellen in 1913 when Alicia was 81, and the memoir is being published in 2016 by the Representative Church Body, Ireland.

When Lewis Weston Dillwyn and Joseph Woods visited Ellen in 1809, they described her as (a very sensible, pleasing, square made and tolerably good looking woman' and considered her (almost the best Botanist, either Male or Female that we ever met with.'

Illness and ferocious internecine disputes spoiled Ellen's final years, which she spent nursing members of her family, as she herself also suffered illness. Her brother Thomas Massy Hutchins (1778-1815) was paralysed, and she also nursed her elderly mother. Ellen and her mother moved to Bandon, thirty miles from Bantry Bay in 1813 in order to benefit from better medical attention, and her eldest brother Emanuel (1769-1839) of Cregane Castle took possession of Ballylickey House.

Ellen's own health deteriorated at Bandon, and after her mother died in 1814, she returned to Bantry Bay, where she was nursed at Ardnagashel in the household of her brother Arthur (1770-1838) and his wife Matilda. Ellen died on February 9th, 1815, a few weeks before her 30th birthday. She bequeathed her herbarium to Turner, and was buried in the churchyard at Bantry. After her death, fighting broke out between two of her brothers, one of whom attempted to seize Ballylickey House with forty armed men.


I thank Madeline Hutchins for commenting on this article.
© ornaverum.org All rights reserved