In the third of our Eneclann expert guest posts Fiona Fitzsimons discuses an under used and underappreciated source for Irish family history research, Burke's Landed Gentry of Ireland.

There are five editions of this source:

The fifth edition contains a cumulative index to all Irish families listed in previous editions, and if you're new to using this source, this is a good starting point.

While these families are all labelled "landed gentry", the group is much larger than the traditional landlords, including those aspiring to this status from the professional, business and merchant classes. While this still represents a fairly narrow group, the family histories are very extensive, including widely diverging collateral lines, junior branches and in-laws. These related families are quite likely to have come from the general farming and business community. The information published in Burke's is provided by the families, and the researcher should always allow for human error. In particular, regular use of this source has shown up real problems with the veracity of pedigrees in the later (4th & 5th) editions. 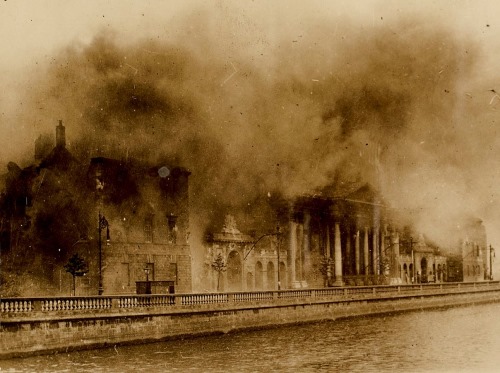 Destruction of the PRO, 1922, during the Battle of Dublin.

Following the destruction of the Public Records Office in 1922, some families used the absence of historical documentation, as an opportunity to try and embroider their family's origins without fear of contradiction. Indeed, the editor's preface to the 4th edition, indicates that Burke's recognised this potential problem:

"... family historians have shown the greatest desire to bring out of their archives numerous details of historical interest which were never before included in any edition of Burke... many of the old accounts have been recast to the advantage of families concerned whose histories are now taken much further back....".

The truth is, it's inconceivable that all records for a landed gentry family will have been destroyed in 1922. This is because in the past gentry families would have not only controlled extensive lands, but would also have been involved in local government most notably through the county inquests, the local court system, and the Boards of Guardians. Their leisure, sporting and personal activities would also have been reported in local and national newspapers. So the variety of records in which you will find information on a gentry family, would never have been confined to one source, and these records were always distributed across more than one records repository.

The Public Records Office was also not the only records repository in Ireland. So although in 1922 a huge amount of our documented history was destroyed, much survives in other repositories including the Memorials held in the Registry of Deeds, the land-records of the Valuation Office, parish and diocesan records in the Representative Church Body Library, institutional, estate and family records held in the Trinity College Library and archives, to name but a few.

The crux of the matter is knowing what sources to use as the 'gate-way' to access these other complex sources and archives. In fact, it couldn't be simpler. When researching an Irish gentry family your starting point will always be the Landed Estate Court Rentals, and Griffith's Valuation. Whether a family survived into the 20th Century, or were bankrupted by the mid 19th Century, these two sources will provide extensive details to pin-down a family to a particular locality. You can then use this information, to access county specific sources that survive.

Conclusion: Although Burke's Irish records are a valuable family history source, when using this book, always compare the pedigrees printed in the later editions with those printed in the first three editions which predate 1922.

You should also be able to verify a gentry family's presence in an area first through Griffith's Valuation and the LEC Rentals. You can then follow this up, by research in the Registry of Deeds, surviving estate records wills and marriage license bonds, newspapers, and records of local government.