The Story of G Blunt & Sons

The first family record of the Blunt bookbinding dynasty is the indenture of fourteen year old George Blunt (1824-1897, our great great grandfather), being apprenticed in 1838 for seven years to bookbinder John Cooper in Birmingham. He then practised as a bookbinder and married Selina Hounslow in 1849; they had a daughter and four sons. It was he in 1879 who founded G Blunt and Sons, based in Paddington, London and later in Kilburn Lane, Queens Park. 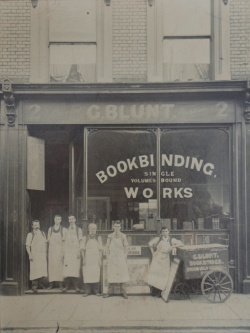 In about 1919 GB&S became a partnership between George Blunt senior and his sons Walter, Frank and (as 'sleeping' partner) Arthur. George junior (GEB) was still working elsewhere at this time. 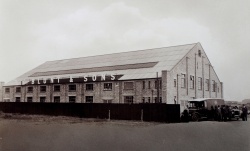 In its earlier days, the company's business had been miscellaneous in nature, but now the decision was taken to switch to binding books for public libraries, and furthermore to guard the sections of each volume, for extra strength, and to sew on tapes to give a strong and flexible binding. This was at a time when the standard library binding was 'oversewn', a method which made books difficult to open and often caused the spines to split when the paper was unsuitable. GB&S installed new machines (the first in the country) and gained a considerable technological advantage over their competitors.

These developments coincided with the Public Libraries Act of 1919, calling on County Councils to provide a library service for their rural areas. The new County Libraries were hungry for books and demand expanded very rapidly. Unlike the long-established Public Libraries, the County Libraries had no allegiance to particular booksellers, and welcomed any firm able to supply their books quickly and efficiently. Since it was felt that people in rural areas would require purely recreational material, thrillers, romances and westerns were the order of the day, as all could be readily supplied by the yard, leaving the choice of title entirely to the supplier. Being cheaply produced, and much used, this type of book quickly required rebinding, so GB&S obtained a large share of this work as well. Since at this time libraries arranged all their book servicing, these must have been happy and profitable years for GB&S.

Throughout the 1920's, Frank was active as a part-time instructor in binding at Camberwell School of Art. And most of the GB&S apprentices during the 1920's to 1950's, most notably GEB's son George Francis Blunt, were drawn from students completing their studies at the Central School of Arts & Crafts, and the firm maintained its high reputation for apprenticeship and further training.

It was a custom in the firm that when an apprentice came of age at 21, a gong would sound and he would be obliged to buy beers for the entire workforce, an expensive round when it was at one time 200 strong. 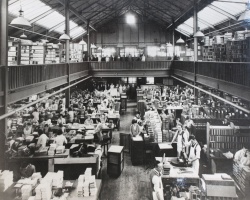 After the move to Harlesden, Bert started the Book Sales Department in a gallery which ran round the building above the bindery (and can be seen in several photographs in the GB&S Album).

He quickly hit upon the idea of purchasing second-hand ex 'circulating-library' books from W H Smith and Boots, then having them rebound in the works and selling them as virtually new books to libraries who knew they would many times outlast the publishers' editions.

He next started the Ideal Book Club, which provided new fiction to small subscription libraries and then, when the bindings failed, withdrew them from stock, had them rebound, and sold them to the public libraries as replacement fiction, thus enjoying the best of all possible worlds! 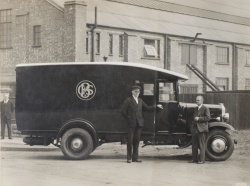 These must have been exciting days. Work in the bindery had to be altered to cope with an entirely new type and volume of work. The large quantities of cheap fiction demanded a cheaper binding, using new methods and materials, which in turn called for separate workflows and much synchronisation of the machines. Soon the maroon-painted Blunt vans (as seen in several photographs in the GB&S Album) became a common sight on the roads of Britain as they called on libraries to collect work for rebinding and to deliver books newly bound.

Frank, who had taken over sales, travelled the country by car and subsequently opened a showroom at 100 Great Russell Street, where librarians could call to select their books and enjoy a taste of his legendary hospitality. George 'Ginger' White then came from the library profession to swell the sales staff, later to be joined by Philip Dambmann.

Frank then made a sales trip to Australia, which proved a great success. The journey in those days had to be made by sea, and the entire family were on the dockside to wish him an emotional farewell, on what was in those days a considerable adventure. Frank's John Bull manner and tendency to call a spade a spade, won the hearts of the Australians and considerable business resulted in both book sales and binding.

After the end of hostilities, books were needed as never before, and a second period of rapid expansion began

Peter Turner, another librarian, was recruited to run the rapidly expanding Book Sales department, and the sales staff was augmented by 'Lee' Webb, an ex-Spitfire pilot, Dennis Risley and 'Ossie' Illenden.

Bert's ever-fertile brain now conceived the idea of purchasing folded and collated sheets (ie books in loose sections before they are bound) from the publishers, binding them at GB&S, including blocking the cases with the publishers' own brasses, and selling them as Blunt's Facsimile Bindings. Since libraries could purchase these books in the certain knowledge that they would never need rebinding, these were a great success.

From this it was but a step to the next idea of purchasing sheet stock of forthcoming adult fiction titles, binding them at GB&S, fitting the publisher's dust jacket and delivering to the libraries on or before the date of publication! Thus the Blunt Library Edition was born. The title lists were issued four times a year and when Peter Turner left to take over a family business, Tom Warne joined the company and produced List #20, which carried 100 titles for the first time.

By providing work for the bindery and the book department, this edition, bound in Redbridge Library cloth, guarded in-and-out of every section for strength and fitted with the publishers' dust jackets, grew to be the backbone of the business and long continued to enjoy great popularity with librarians at home and overseas.

Once again, the bindery needed to be reorganised to cope with this entirely new input, and this was masterminded by George Francis (GFHB) and George Malcolm (GMB). The making of endpapers had always been a hand operation but this was now far too slow. Now the challenge of long runs of work of an identical size encouraged GMB to invent and construct, in GB&S's own workshop, a machine to produce both guarded and unguarded endpapers. This machine, only one of many produced in-house, solved a longstanding problem by speeding-up production and releasing valuable labour for other operations.

And meanwhile, GFHB was introducing other changes and improvements in the bindery workflow, which now bore little resemblance to pre-war days. 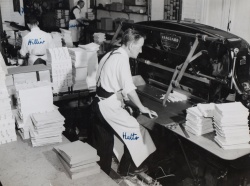 The company prospered in spite of the libraries requesting GB&S to do all their book servicing at a purely nominal cost. Supplies of labels, pockets and catalogue cards arrived in ever increasing quantities, creating an enormous logistic and storage problem – space had to be found for the many women staff engaged to do this work.

Shortly afterwards, furthermore, the plastic jacket was invented and the company was required to fit these to all books supplied. The company then pioneered the marketing of self-adhesive transparent PVC sheeting under the name of 'Takibak' and GMB invented a plastic binding called Plasticover, and an adjustable plastic book-covering material, in roll form, marketed under the name of 'Bookroll'.

The company also started a School Supply department, which seems to have caused another massive, though temporary, storage problem. On the death of G E Blunt in 1956, the cousins George Francis (GFHB) and George Malcolm (GMB) were appointed joint Managing Directors, Walter and the other uncles remaining on the Board [this conflicts with statement below].

Then in 1958, Bert Blunt negotiated the sale of GB&S to the publishers Cassell, as a safeguard against death duty liabilities [for the Directors of GB&S]. Bryen Gentry, David Ascoli and Bill Angell of Cassells joined the Board of GB&S, to be joined in 1964 by Philip Dambmann and Tom Warne from within GB&S. Shortly afterwards, Bert retired through ill health, and George Francis (GFHB) and George Malcolm (GMB) were appointed joint Managing Directors.

The advent of plastic jackets prolonged the shelf lives of books and so rebinding work was diminishing. Libraries were purchasing paperback fiction and this added to the drop in binding work required. These factors, together with high operating costs in London, and the difficulty of obtaining skilled staff, led to a decision to close the bindery in 1968, and plans were made to relocate to Gosport, Hampshire.

So, sadly, nearly a century of family bookbinding came to an end. Fortunately, however, the book sales department was thriving. But before the move could take place, and a year after Collier Macmillan had purchased the Woolston Book Company, based in Nottingham, they also purchased Cassells and the GB&S move to Gosport was cancelled.

So, in 1970, with a few of the staff who were willing to venture north of Watford, GB&S commenced trading at Gamble Street, Nottingham, running a parallel workflow to Woolstons but sharing stock, packing and dispatch, and accounting facilities. A unit at Gosport was retained to handle the Blunt Library Edition, bound stock and plastic materials under the control of George Francis (GFHB).

This arrangement continued successfully until local government reorganisation in 1974, when it became logical to amalgamate under the name Woolston & Blunt. And with the retirement of GFHB at that time, the Gosport unit was closed and all operations were centred at Gamble Street, where Tom Woolston had purchased additional space and where all could benefit from the newly installed computer system.

At the time of writing (Oct 2012) the only visible signs of Woolston & Blunt are the links in Friends Reunited ...

And that is the story of G Blunt & Sons, started over 130 years ago by a man and his wife, in a small premises off the Harrow Road. One stands bare-headed at such enterprise, vision, inventiveness and comradeship over five generations of a single family.

Let us just recall some of the larger than life characters, and some of the unsung heroes and heroines.

And there were so many others besides.

Huge thanks are due to Tom Warne, erstwhile Director of GB&S Ltd, and to my cousin Angela Jefferies, for their typescripts on which this account is closely based.