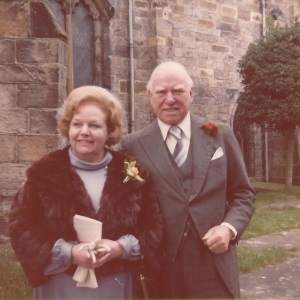 Uncle Eric was a charismatic rough-hewn individual whom I greatly admired. As a young Lieutenant in 61 Heavy Regiment Royal Artillery during the later stages of the Italian Campaign in World War II, he had been awarded the Military Cross for exceptional courage and initiative under heavy German artillery fire. After the war he went into the insurance business and founded E K Cornes & Partners Ltd, a very successful insurance brokerage subsequently merged with Glanvill Enthoven.

He was a keen amateur sportsman, and played regularly for London Wasps RFC. He was also a keen supporter of the Arsenal AFC, and as a friend of the Arsenal chairman Denis Hill-Wood was a frequent guest in the Directors' Box at the Highbury Stadium.

In his later years he was also an enthusiastic supporter of the Royal Society of St George.

His convivial and gregarious nature ensured a massive turnout of erstwhile army comrades, rugby team-mates, golfing friends, business colleagues and doubtless admiring business rivals too, all of whom crammed in to support the family at his eventual funeral, during which there was quite possibly the most thunderously stirring collective performance of Jerusalem one could ever hope to hear. A fitting send-off he would himself have enjoyed!