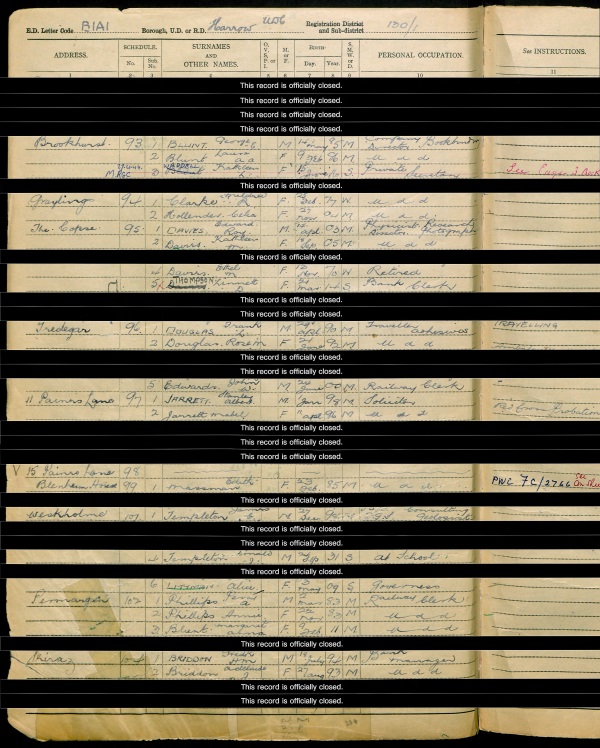 I'm not quite sure what sort of document this is - perhaps an Urban District Council ratings assessment, or a limited form of national Census return.

Nor am I sure of the best way to display it – in jpg or pdf? Time will tell.

But it most definitely relates to the houses in Paines Lane, and (if only for my own deeply nostalgic benefit) I'd like to touch briefly on the local geography. 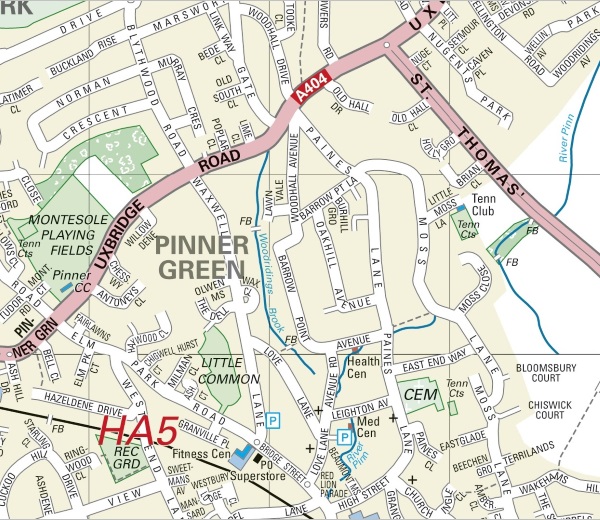 Brookhurst, 3 Paines Lane, where I perforce spent so much time in my early years in the late 1940's, and of which I still have such vivid and recurrent surreal dreams nearly seventy years later, was located at the multiple intersection with Woodhall Avenue and the Uxbridge Road. Motor vehicles were few and far between in those postwar days, and adult concern mostly negligible, so I could wander unaccompanied across to Woodhall Drive, on one side of which was a dense thicket of trees amongst which imagination could run riot as to the possibility of wild carnivores, pirates, robbers etc.

As a contributory feature was the pretty little stream that sparkled past the far edge of Brookhurst's back lawn, from the overhanging Weeping Willow on the near side to the dark and slightly sinister culvert at the further corner, and then under Paines Lane, to join the Woodridings Brook on the far side, amongst the trees aforementioned.

Suitably welly-booted, and slightly stooping, I would creep along the full length of the water-course, confident in the knowledge that I was the first that ever burst into that municipal engineering contrivance.

Perhaps the Woodridings Brook was the feature for which Brookhurst itself had been named, and indeed (as the map above reveals) it was a tributary of the River Pinn for which the whole area was named. But of this I knew nothing and cared less at that age.

From time to time, when I was being accommodated at #3, Brookhurst, my buxom and beautiful Aunt Margerie would sally forth, with me in tow, and we'd walk up the steepish slope past #27, Permargan, and onwards to Pinner High Street (please consult the map), for some shopping on her part, and hopefully a visit to the newsagent to purchase a comic for me.

Mere words cannot convey the giddy, magical aroma of a D C Thomson comic in those far-off times - it intoxicated the senses, and I assure you that is no exaggeration. Whether it was a Rainbow, a Dandy or a Beano, a Wizard or Hotspur or Adventure, it promised hours of fascinated reading - or days, if it happened to be a Rupert annual!

But what of Permargan, 27 Paines Lane, I hear you cry impatiently? Whence cometh it and whither goeth it? Pausing only to refill the third daily decanter of port (which, as my father always assured me, was the fuel of Gibbon's Decline and Fall, both historical and personal, though it was Gibbon who described his tutors at Magdelen as being sunk in port and prejudice), I'll try to shed some light.

At this time, it was still occupied by Percy and Annie Phillips, together with their married daughter Margaret Anna (née Phillips) Blunt, plus an elderly lady, a retired governess (possibly a Jewish refugee?). And the name of the house was actually a combination of Per(cy) plus Marg(aret) and An(nie).

Margaret's husband George was still in the Royal Artillery (bombarding the Nazis into submission, one can be sure) and their two children, Angela and David, were of course safely under Margaret's wing.

At the time I would first have been introduced to them, Uncle George and Aunt Margaret, plus children Angela and David, were the realities, and I don't remember any other members of the household. George was handsome, debonair and liberal with half-crowns, as I've described elsewhere. Margaret was tall, slim, elegant and kindly, I loved her dearly.

Although I can remember Brookhurst in detail, Permargan impressed me particularly by its highly-polished parquet flooring, its leaded windows, and by the ready availability of an exceptionally fine Bagatelle board. Whole afternoons could be spent very pleasantly in trying to improve my score! 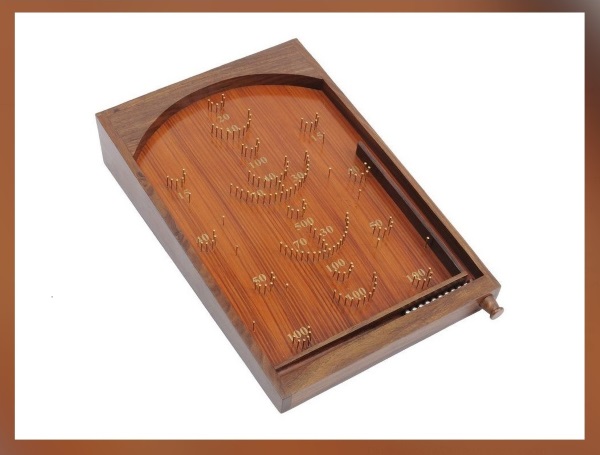 The decades passed, indeed accelerated, as they so often do, and Margaret wrote to say that she and George had relocated from Pinner to Bosham. Exactly when, though, I can't work out, as like so many of her sex she didn't date her letter. But what a nice cheery one it was. 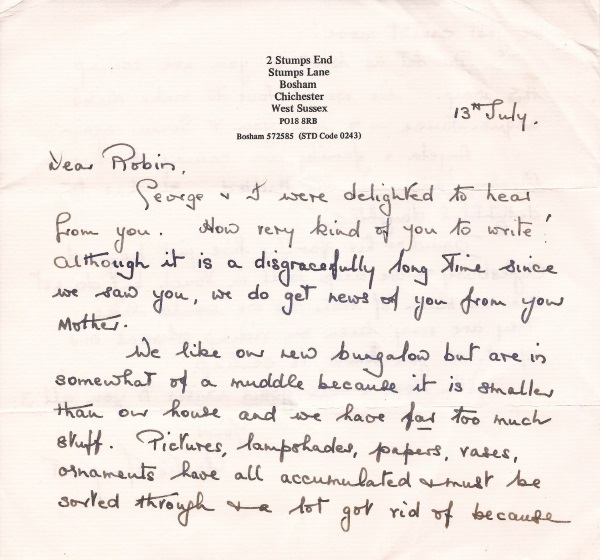 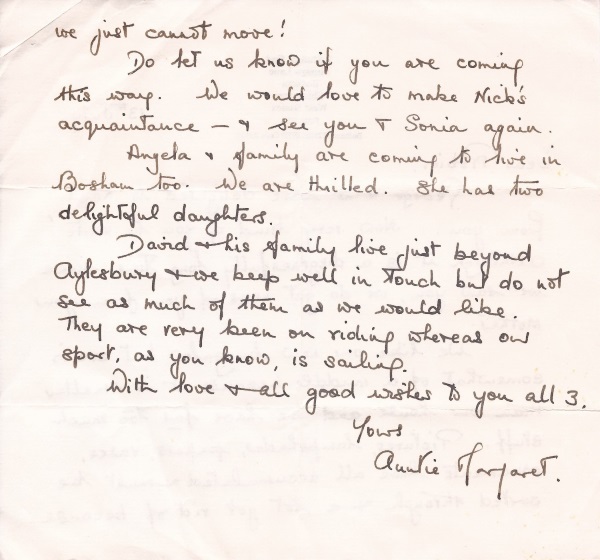 In fact, as she says in her letter, it was a familial migration, not just a generational one.

(Bosham had been a familiar retreat of mine in late pre-teens and early teens, as it was in easy cycling distance from Grannie Waddell's bungalow in Fishbourne, and I had official permission to keep my Fairey Duckling on the hard standing under the club-house. Self-taught, self-reliant and utterly unsupervised, I used to sail it all over Chichester Harbour and once or twice even out into the Solent.)

Eventually, George and Margaret moved on from Bosham to Goring on Thames, where she died; George thereafter moved to Aylesbury. He visited my work-place in Reading before leaving for Buckinghamshire, and we talked for an hour or more in a secluded corner of the reception area. And a week or so before he died in 2008, just three weeks after his sister Kathleen (aka my mother Katie) had died, he rang me one evening at home, and talked things through, for just short of an hour.

I was an obscure and relatively unsuccessful nephew, both of whose parents had not endeared themselves to him, and on the second occasion in particular I was slightly mystified. But my father had done much the same sort of thing not long before he died, and perhaps one gets a sort of 'Times Up' signal to allow an opportunity to make peace with the world in general and family in particular!