This was intended to be a purely intermediary Connection, interrelating as it does the Stairs, Kaulback and Townend Connections. But it's full of intrinsic interest, and has now taken on a life of its own. Let's first get the dynastic overview from Uncle Bill's The Kaulbacks, 1979: 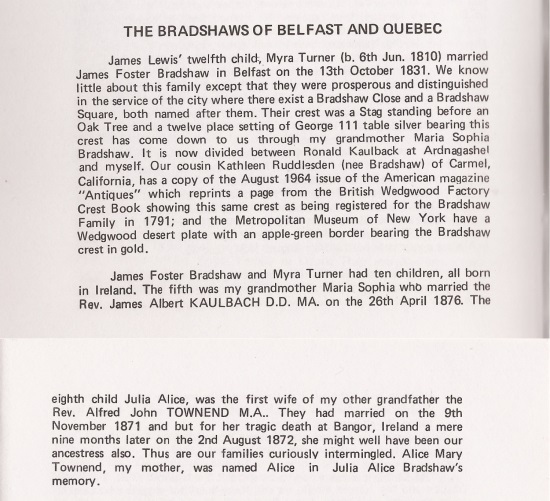 and initiate the nitty-gritty with a very helpful family tree reproduced from the website www.bradshaw-ulster.co.uk/index.htm (note that this was a branch of the very distinguished and long-established Lancashire family of that name): 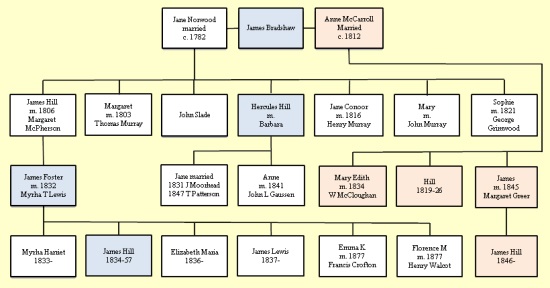 Bill Kaulback states that James and Myrha had ten children, all born in Ireland, the fifth being Maria Sophia and the eighth being Julia Alice.

The very informative website www.bradshaw-ulster.co.uk/FamilyTrees/FT-James1760Hillsborough.htm#James_F_Bradshaw_&_Myrha_T_Lewis, however, states firmly that Emma Katherine was the 6th daughter, and it doesn't mention Maria Sophia or Julia Alice.

It also tells us that

The spelling of McCloughan appeared to have changed sometime in Canada. William and James don't appear to have stuck together once they got to Canada. William & Mary settled in Ontario and James ended up in Quebec working for Bank of Upper Canada.

In 1846, however, James had been married for 15 years and had fathered at least five children with his wife Myrha. But the admittedly brief narrative above mentions neither her nor their children. There is, however, mention elsewhere of a legal action against him (and others) by the Bank of Upper Canada.

Was he a thoroughly Bad Egg, as well as a Love Rat? This will all require more research than I can find time for at the moment. The possibility of a bigamous Canadian marriage would certainly explain the "missing children" in the UK family records.

An Unrecorded Chapter of the Mutiny

For the benefit of those under the age of 60, the 1857 Indian Mutiny1,  2 was a quite widespread rebellion by the Sepoys in the Bengal Army (which was officered by the British). According to legend, it was triggered by a sudden rumour that their cartridges were greased either with beef dripping (which was a personal defilement to the Hindus, of course) or with pork dripping (which was naturally a personal defilement to the Moslems). There is an element of truth to this, but, as always, the truth is rarely pure and never simple.

But dulce et decorum est, and James Bradshaw died fighting pro patria, as he saw it, and I think we should respect him for it, however much we may deplore the whole business of imperialist subjugation. 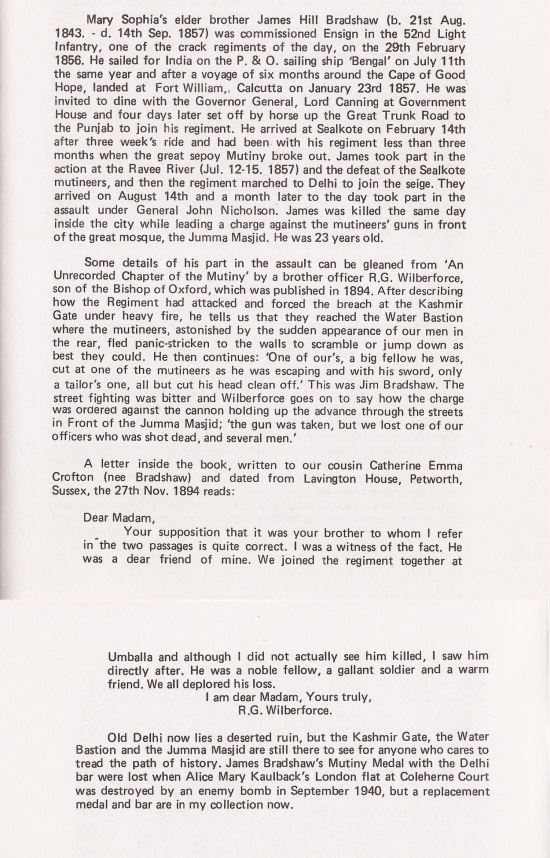 I had the pleasure to receive your letter regarding your son yesterday, and I am most happy to give you all the information in any power concerning his glorious though sad death, for it is indeed sad to be cut off so young.

He had behaved most gallantly, and, in taking the Bastion shortly after our entry at the Cashmere Gate, he was very conspicuous. I directed a company to go and clear it – there was only one small entrance, sufficient to admit two men at a time. He was with the company, and they forced their entrance in a most intrepid manner. Your son had a personal encounter with a Sepoy inside the Bastion, and he cut off the native's head with his sword at one blow. The scene of your son's death, which was instantaneous, was in a narrow street.

There was a gun placed in the centre of the street, which was about fourteen or sixteen wide, and in taking this gun he was shot dead on the spot. I saw him immediately, and there was not a sign of life, so that he could have suffered no pain whatsoever. I can assure you that he is much regretted by his brother officers, one and all. I saw sufficient of his conduct on that eventful day to pronounce him to have been a fearless and intrepid officer.

We have his case, with several trinkets in it, which shall be sent to you by the first opportunity, but owing to the difficulty of obtaining carriage even for a small parcel in safety just now, there may be some delay. I received a letter from his brother-in-law at Hong Kong about a fortnight ago, requesting that a memento might be reserved for him, and I have put aside a prayer Book and two rings, which, anticipating your approval, I will forward at the first opportunity.

An officer of the Regiment witnessed his interment in the graveyard of the Cantonment at Delhi. Thirteen other officers were buried at the same time. It was impossible that more officers could attend, as they were urgently required against the enemy in Delhi. As soon as affairs are in a more settled state, a tablet will be erected to his memory by his brother officers. At present it is impossible to get anything of the kind done.

Offering to Mrs. Bradshaw and yourself my sincere sympathy in your great loss,

Believe me,
My dear Sir,