This heading (as per the Rude Forefathers) is most probably slightly incorrect in detail, but provides a stepping stone to higher things

But the actual connection with the origins of the Cosby family is that Hermeston was the name of a ancient manor in Lincolnshire, as I shall do my best to recount, via a serendipitous discovery on the internet:

The Antiquities of Nottinghamshire, Extracted Out of Records, Original Evidences, Leiger-Books, Other Manuscripts, and Authentic Authorities. Beautified with Maps, Prospects, and Portraitures, by Robert Thoroton. Second Edition. Volume 1 of 3. 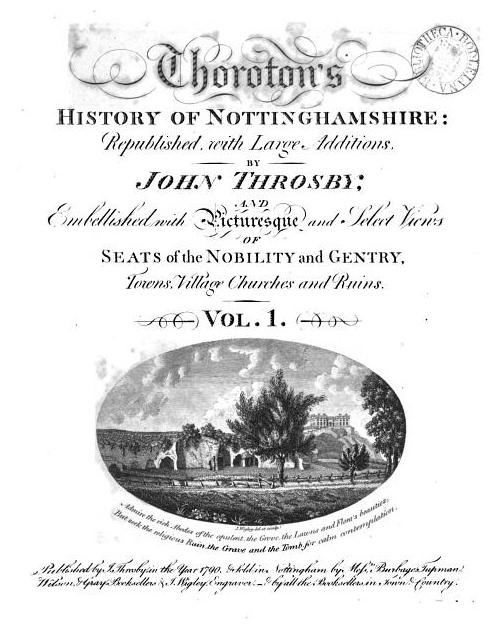 For our purposes, we're fortunate that electronic access is possible:

(fn. 42) A Manor in Esterleke, 2 H. 5. [1414] was settled on Roger, Son of Raph Pare, and on Joan his Wife, and their Heirs; and Thomas Staunton, the Elder, of Sutton-Bonyngton-upon-Sore, Esq. 18 E. 4. [1478] (whose Son and Heir was Thomas Staunton) passed his Manor in Esterleke to the said Raph Pare and Roger, amongst many others, viz. Sir Richard Neele, the Justice, John Babington, Esq. Chr. Neele, &c.

(fn. 43) Raph Pare, of Great-Leake, in the County of Nott. Yeoman, was outlawed in the County of Stafford, concerning a Plea of Debt, 30 H. 6. [1451] which Outlawry was afterwards annulled by the Grace of the Court in Michælmas Term, 31 H. 6. [1452] because the said Raph alledged, and the Jury found, that he was a Gentleman born.

(fn. 44) His Seal of Arms was a Chevron engrailed between three crosse Crosselets, which was affixed to his Deed, bearing Date July 7, 21 E. 4. [1481] wherein he conveyed the Manor of Hermeston, in the County of Lincolne, to Robert Cosseby, and Isabell his Wife, Daughter of him the said Raph, and Heir to his Wife Isabell, her Mother, Daughter and Heir of John Blake, of Hermeston.

(fn. 45) This Isabell married to her second Husband Thomas Griffith, and the said Robert Cosbe being dead, the 7 H. 8. [1515] herself died seized, 34 H. 8. [1542] of a Manor in Great-Leak, or Esterleke, and five Mess. three Cotag. one Hundred Acres of arable Land, forty Acres of Meadow, and thirty of Heath, and 4s. 4d. Rent of Assize, in Great-Leak, held of the Honor of Tutbury, by the Service of the twentieth Part of a Knight's Fee, and 6s. 8d. Rent, Richard Cosbe, Son of her Son John Cosbe, being then her Heir, and above twenty six Years of Age.

This Manor came afterwards to be the Possession of the Family of Armstrong, of Rempston.

Toroton evidently used a suitably antiquated format for expressing dates, such that "m X. n." meant in the m'th year of the reign of King (or Queen) X the n'th!

So for example, "2 H. 5." meant in the second year of the reign of King Henry the Fifth, roughly speaking 1414. Note that 1 is subtracted from the accession date before m is added.

Note also that in Plantagenet times (and until our adoption of the Gregorian calendar in 1752) England reckoned the New Year as starting on the Feast of the Annunciation, aka Lady Day, on 25 Mar each year.

To add to the complications, Henry VI and Edward IV boxed and coxed over a period of 60 years. Professional historians presumably take all this sort of thing in their stride, but it makes my brain ache.

The dates given in the extract therefore correspond to the more familiar calendar years as follows:

So having settled these technical details, what are we to make of the other information on offer? To make sense of it, I think we have to infer the existence of an intermediate individual Raph Pare Jr, as per the tabulation below, as father-in-law of Robert Cossebe, on whom he settled the Manor of Hermeston in Lincolnshire. Hence the latter's soubriquet of Robert Cosby of Hermaston in the Rude Forefathers section.

Robert's wife Isabell Pare Jr was heiress of the Manor of Great Leake, and so their son John Cosbe was presumably known as John Cosbe of Great Leake (as in the Rude Forefathers section), at least until she remarried to Thomas Griffith. I just don't know how these things worked. Note that the phrase "seized of" simply implies "possessed of" or "possessing".

John Cosbe's son Richard Cosbe is clearly the elder brother of the redoubtable Francis Cosby of Stradbally in the Rude Forefathers section, though the dates need to be harmonised, and so the continuity with the Irish Cosbys is definitely established.

(Or certainly would do if we could be sure that Richard did indeed have a younger brother Francis. As was once remarked in another connection, all argument is against it; but all belief is for it. However, I'm now looking into some more solid evidence that Francis' pedigree wasn't cooked-up by the Burkes père et fils – indeed, why cook-up a connection with an obscure bunch of Midlands yeomen?)

Sadly, the last tangible link between East Leake and the Cosby family disappeared just over 50 years ago:

In the medieval period, farming and the beginnings of commercial activity on which the prosperity of the village depended were in the hands of the owners of a few large farmsteads, or "manors". The principal manor was Shirley's, close to the Church and today comprising the Old Hall Farm complex; Joyce's manor was originally where the buildings of the former Brookside Farm now stand, but the name was transferred by John Bley (see below) to his grand new house on Main Street – years later this became a shop and Post Office, which only closed in 2003; Cosby's manor, demolished in 1963 when Salisbury Avenue was built, stood just about where a block of flats was built in 2006.

For a much fuller account of the early history of the village of Great Leake, see 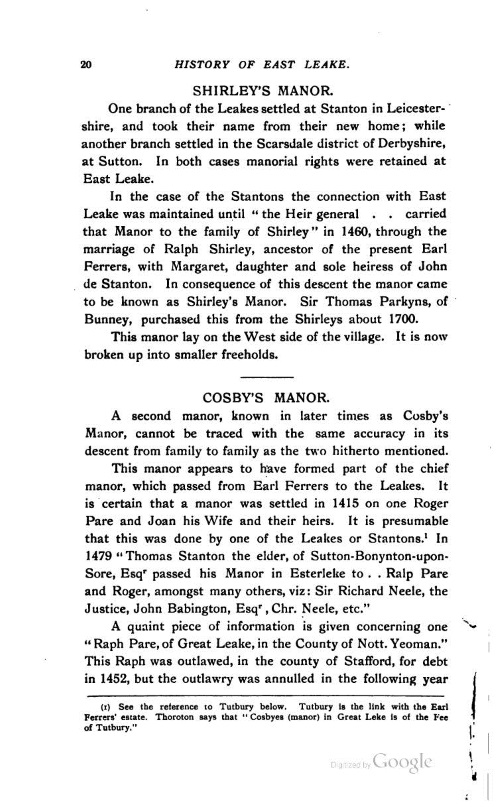 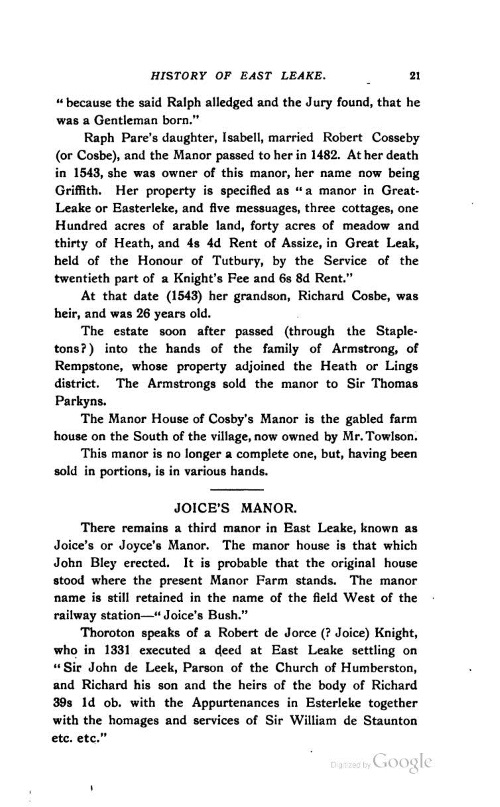 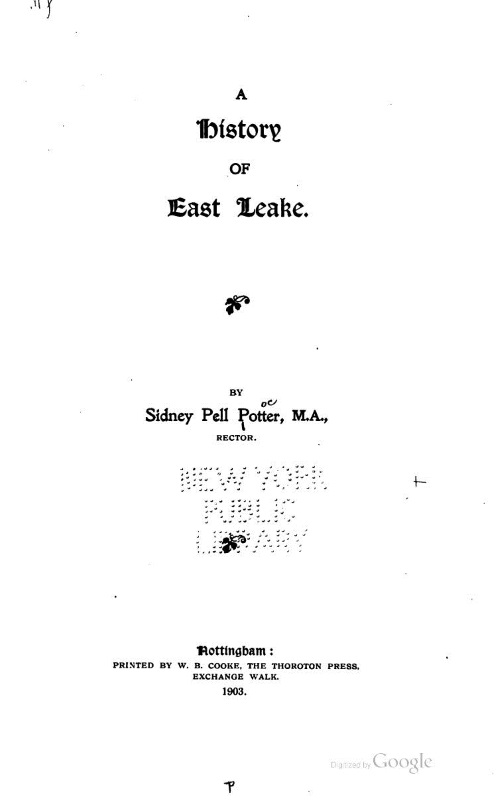