The extract below is but the first page of an immensely detailed obituary, extending over numerous pages of both this issue and the following one. A direct descendant of Francis Cosby as he was, it's actually the preamble about the Saxon origins of the family prior to Francis Cosby that I find the most interesting. 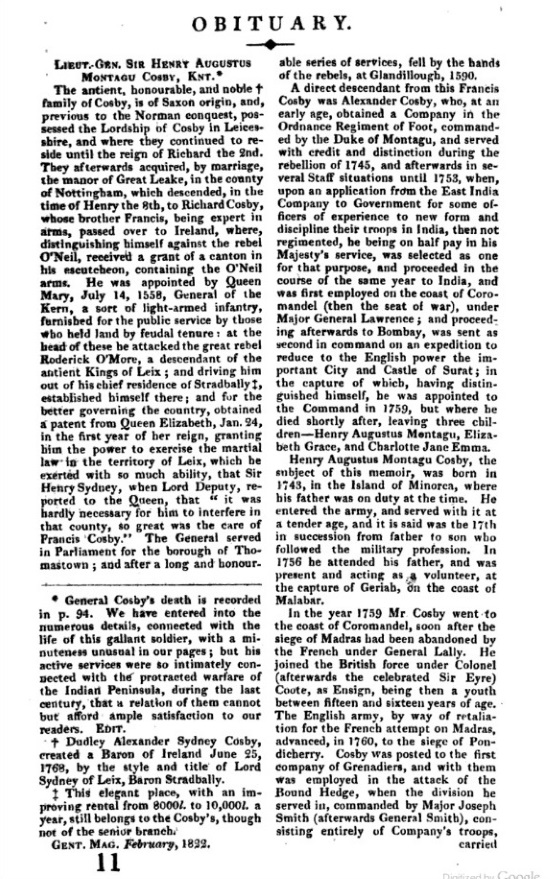 The ancient, honourable and noble family of Cosby, is of Saxon origin and previous to the Norman conquest possessed the Lordship of Cosby in Leicestershire, and where they continued to reside until the reign of Richard the Second [1377 – 1399]. They afterwards acquired, by marriage, the manor of Great Leake in the county of Nottingham, which descended in the time of Henry the Eighth [1509 – 1547] to Richard Cosby, whose brother Francis being expert in arms passed over to Ireland ...

Is this just another example of fanciful, or even wishful, invention (such as the Burkes were so notorious for)?

Not necessarily – let's now turn to that most hard-headed and meticulous of historical records, the Domesday Book, completed in 1086 within the astonishingly short span of that one year, and now available on-line. It reflects the pre-existing Anglo-Saxon administrative subdivisions of shires, hundreds (also known as wapentakes in the Danish areas of the Midlands and North), and manors. The basic unit of land in the Domesday Book is in fact still the manor.

Was each manor co-extensive with one particular village, with its own church? Generally, yes, but manors could be larger or smaller than just one village, and some manors might even be discontiguous.

In charge of each manor had been the thane (or thegn), who probably had the largest house (hence 'manor-house') and had a hereditary responsibility for the conduct of manorial affairs.

After the Conquest, many such formerly independent Anglo-Saxon and Danish thanes and their descendants became under-tenants of Norman lords, and seem themselves eventually to have been informally referred to as lords of their manors, though the usage was more akin to lairdship in Scotland, and didn't necessarily have any implications of grandeur.

Cutting to the chase, does the Domesday Book lend any credibility to the Cosby's status as Saxon thanes and IDC post-Conquest lords of their manor? One must be careful, because surnames as such hadn't yet kicked in, and such individuals can only be retrospectively identified from their posterity!

As far as I can make out, the village of Cosby was trisected into slices each belonging to different manors, as the placename of Cosby has three separate mentions in the on-line Domesday book, only the first of which involves "our" Cosby as main man.

Cosby appears in 3 entries in Domesday Book (show all).

Oddly enough, we've met Waltheof Earl of Huntingdon and his wife Countess Judith (niece of the Conqueror) elsewhere in OrnaVerum, but that's pure coincidence. As for "Head of Manor" aka Cosby 1, he would have undoubtedly have been known by his Christian name, with "of Cosby" appended when transacting official business, and when surnames came along there's a very good chance that his (or at least his descendants') surname would be Cosby.

But it's certainly a disappointment that the Domesday record doesn't appear to provide any positive evidence that he was "our" Cosby. Though of course, absence of evidence isn't evidence of absence (and both sides1,  2 of such an argument can be debated till the cows come home).

Nevertheless, the absence of documentary evidence in the public domain doesn't mean that it doesn't exist in some private domain (such as the Stradbally family themselves), about which I should be delighted to be informed.

However, we might be putting too much emphasis on documentary evidence, and the persistence of a strong oral tradition within the family in the centuries that followed should also be weighed in the balance.

And indeed there are subtler arguments also that strongly imply that the village of Cosby in the county of Leicestershire was the fons et origo of all the several families whose surname is Cosby.