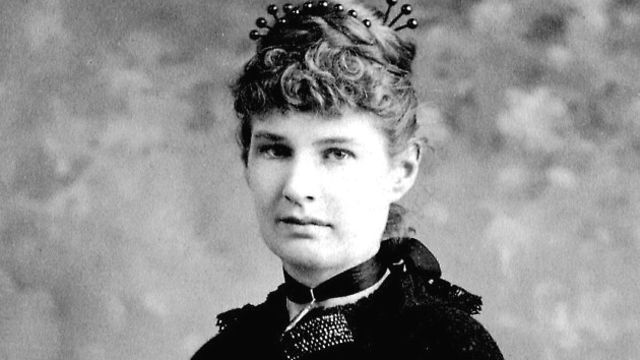 Annie Bonus, or Annie Kingsford, was born in Stratford in 1846

Born in Stratford 170 years ago, Anna “Annie” Bonus was the daughter of a prosperous shipbuilder and an Irish/German mother.

The youngest of 12 children, her later collaborator, novelist Edward Maitland describes her childhood as lonely, but populated by fairies and fairy-tales.

“Her chief delight as a child was to lose herself in the ample gardens [...] at Stratford, and subsequently at Blackheath,” writes Maitland in his 1896 biography Anna Kingsford: Her Life, Letters, Diary and Work.

“Here she would associate with the flowers on even terms, holding converse with them, putting into their petals tiny notes addressed to the fairies.”

Annie’s pull towards the spiritual and supernatural would punctuate her life, leading to her immersion in the spiritualist theosophical society and her intense empathy with living beings.

Writing poems from the age of nine, Annie produced her first book at just 13. The sensitive poet was plagued throughout her life by ill health, her physical fragility contrasting starkly with her strength of mind. Even marriage could not threaten Annie’s independence. On New Year’s Eve, 1867, she eloped with cousin Algernon Godfrey Kingsford after what Maitland describes as a “long and troublous” engagement, due to her parents preference for an older and wealthier suitor.

But marry they did, though their honeymoon in Brighton came to an abrupt end with a severe asthma attack, resulting in Annie being nursed back to health by her mother. This would not be the couple’s only separation. “It was soon made clear that her marriage was to be a marriage in little more than her name,” writes Maitland.

Nonetheless, the arrangement appears to have been harmonious. Writing in The Longest Struggle, Norm Phelps says Algernon “never failed to support Annie in all of her undertakings – some of which appeared positively scandalous for the wife of a priest of the Church of England”.

These undertakings included a conversion to Catholicism in 1872. In the same year, her father’s death and her subsequent inheritance led her to purchase The Lady’s Own Paper, a magazine she would edit for two years.

“Her principles were everything, and her adherence to them proved fatal to the enterprise,” described Maitland of the commercial failure, as Kingsford shunned advertising.

But the journalistic foray was not for nothing. It was by editing articles that Kingsford became aware of vivisection, becoming one of the most vociferous campaigners against the use of animals for medicine.

As a married woman in the 1870s, she left her husband’s parish in Shrewsbury for Paris to study medicine – becoming one of the first women to obtain a medical degree when she graduated in 1880. Her aim, according to Maitland, was to learn about vivisection so she could campaign from a position of authority.

With her husband’s encouragement, widower Maitland would accompany Annie to Paris, spending increasing amounts of time with her. In the official 1881 census, his name is found alongside Annie’s, a “visitor” to Kingsford’s then residence in Chapel Street, Mayfair. The names of Annie’s daughter Eadith, 13 at the time, and husband Algernon, are nowhere to be seen.

Though fiercely feminist in her ideas and actions, Annie did not align herself with the struggles of contemporary activists.

Maitland writes: “Though sympathising to the last in the movement for the enfranchisement of women, she did not long continue to take an active part in it,” adding: “Her conviction was that women would more successfully achieve their desired emancipation by demonstrating their capacity for serious work than by merely clamouring for freedom and power.”

At just 41, Annie’s life came to an untimely end after dying from a pneumonia-related illness. She died on February 22, 1888.

Annie’s extraordinary existence is best summed up in her own words:

“It is quite true that I find myself much the most interesting person I know [...]

“It is because I am such a puzzle to myself and I want to be explained.”