Ironically, as Isabel Bonus seems to have been so reserved and unobtrusive in life, the historical footprint of her parents and extended family is exceptionally substantial – I've reproduced practically all the following information from, or starting from

Of course, such a website can only be as reliable as the information supplied by its members, and so I extend my thanks to them also. As always, I've cross-checked to hopefully eliminate any nonsenses.

The Bonuses appear to have been a very fecund tribe, though sadly subject to the attrition of infant – or indeed adolescent – mortality afflicting even such a relatively advanced nation as Britain right up until the 20th century (even then, of course, tuberculosis and polio extended their claws for decades afterwards, as my own family were only too sadly aware).

I'd be extremely grateful if you can correct any inaccuracies or omissions in the table following - I very much appreciate Janet Sharp’s fascinating information regarding other idealistic members of the Bonus connection besides Isabel.

Isabel was baptised into the Church of England on 15 Jan 1875 at St Saviour's Church in St Saviour's Road, Croydon, by her uncle Rev Edward Bonus, within ten days or so of her birth. We see from the register that the family address was Oakwood House, Sydenham Road, Croydon.

Mortality in those days no respecter of persons, or station in life – especially if you were a woman married to an 'attentive' husband – Isabel's mother Mary died in 1879, shortly after giving birth to Edward – puerperal fever, or sheer exhaustion, who knows? Isabel was barely four years old, and her two older sisters little more.

And then her father Charles died in 1883, of precisely what one doesn't know.

For inscrutable reasons, she together with those two sisters, plus possibly the fragile elder siblings Mildred and William, were placed in the care of guardian(s) outside the family, rather than being absorbed into the households of one or more of his brothers Henry, Albert or Edward. Possibly this was because Henry lived in North Kensington, Albert died the following year anyway (and had possibly been ailing for some time), and Edward lived in Buckinghamshire – his marriage was childless and he (or his wife) may not have relished the possible influx of five children.

In the 1881 Census, the household had comprised the widower Charles, his surviving son William, and his surviving daughters Mildred, Agatha, Alice and Isabel.

Ten years down the line, Charles has died, William has gone out into the world, Mildred has died, and just the three girls are recorded in that 1891 Census – living at the Woodford House School, 7/8/9 Dingwall Road, Central Croydon. Only Isabel is a actually a scholar (pupil), but all three have the status of "Wards". But wards of whom? Could it be the widowered headmaster Thomas Waters (or Walters?), whose age is given as 80? Note that two of the schoolmistresses listed are Anne and Jane Waters (or Walters), daughters of Thomas – it was clearly a family enterprise.

Ten years later, all becomes clear. The three girls are recorded in the 1901 Census as living at 11 Nottingham Road, Croydon, The head of the house is Anne Walters and her sister Jane is also resident, both having the status of retired schoolmistress. And most importantly, the three girls are recorded as late (ie erstwhile) wards of A and J Walters.

A further ten years on, very little had changed. The 1911 Census shows that the household had moved to "Sarum", Radcliffe Road, Croydon but Anne and Jane Waters (sic) were still in charge, the three Bonus girls were still with them, and Annie Allinson still had the status of visitor! Ada Phillips had progressed from parlourmaid to cook, and probably terrorised the two new young domestics the way that cooks reputedly did.

Prospects of marriage had receded, and although they probably had sufficient private means not to have to earn their livelihoods, the rest of their lives was probably going to be the same old same old.

But not, of course, for Isabel.

Quite how Mary Isabel Bonus had first met Mary (May) Ethel Muir Donaldson is still a mystery, to me anyway. May's first book, Isles of Flame, with watercolour illustrations by Isabel, was published in 1913, so bearing in mind the extended timescale of such matters, they must have become acquainted by 1911 at the latest. I don't think it could have been at the recommendation of the publishers, as Isabel's figures are TBH rather wooden – she clearly excelled at static subjects such as feature in her sketchbooks. (In fact, Isobel had already established a flourishing career as an illustrator, especially of theatrical costumes.)

I have two suggestions, not necessarily mutually exclusive

Isabel had been orphaned at the age of 8, May had lost her father at the age of 6, and was estranged from her mother for a lengthy period following her apostasy, and they would immediately have discovered how much they had in common. They were both fiercely unconventional, and maybe there was also an illicit pheromonal buzz ...

To be alive (sic) was very Heaven

Well, they weren't exactly young, were they? Some say that May first went to Scotland in 1905, some in 1908, and nobody mentions Isabel. But whenever it was, it must have been an emotional rebirth for them both.

Although they became associated much earlier, their companionable explorations of the Highlands and Islands only emerged in the three canonical volumes (though I'm not sure about the first)

after which May published no further accounts of their anabases – most probably because she (they?) were totally absorbed in the construction of Sanna Bheag.

But as far as I know, May never specifically mentioned Isabel by name, nor did she show her recognisably by photograph, in any of her books. This was almost certainly a conscious discretion, as Sapphic outing was even more unthinkable than the Wildean variety had been until a generation earlier, though Radclyffe Hall's The Well of Loneliness was a small step in the right direction. But we can be pretty sure that, on most occasions, a reference to "my friend" or "my companion", implied that it was Isabel.

A magical glimpse of Isabel's lissom personality may be identifiable in the extempore quadrain in "Wanderings" p 94, composed on returning from an extensive tour of one of the Inner Hebrides,

There's beauty here for every sense
And exercise for leg
We are not vegetarians
But we could live on Eigg.

I think I've fallen in love with her too! Nowadays, in fact, the only politically correct sort of libido being the homoerotic variety, I think I'd like to be reincarnated as a lesbian.

When they eventually emerge from the maelstrom of moving house, I'll also reproduce a selection from Isabel's sketchbooks which were passed on to me by my father in 1958, presumably after May Donaldson's death (perhaps she had bequeathed them to him, as presumably he would have met Isabel when staying at Sanna Bheag as a schoolboy). 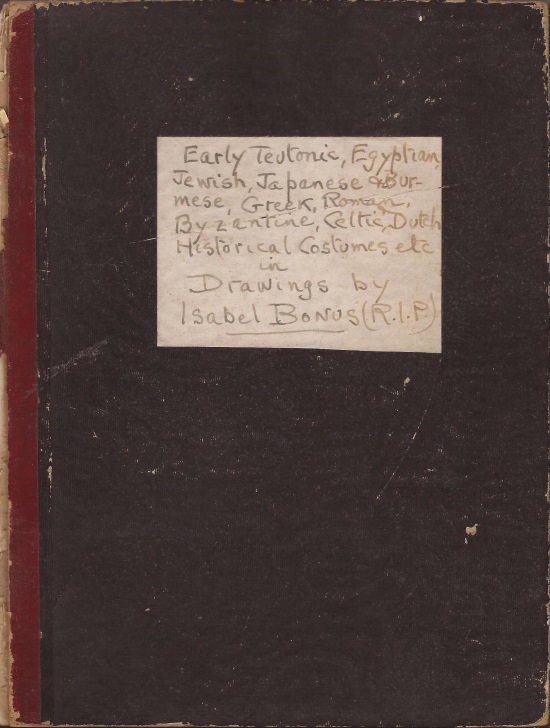 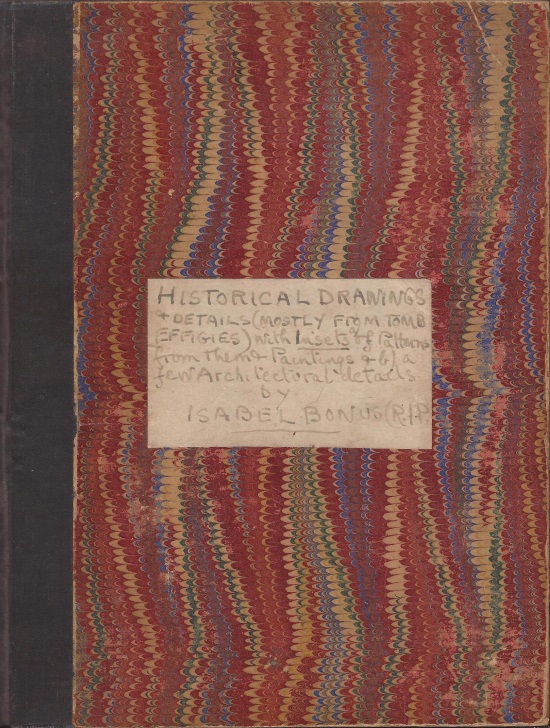 Ashes with ashes, Dust with dust

The precise circumstances of Isabel's death in 1941 and the whereabouts of her grave in Oban (in which May too was eventually interred) are discussed in the Decline and Fall section of May's profile, but the grave itself and the inscription make an inspiring finale to what has been admittedly rather an exiguous account of her life. 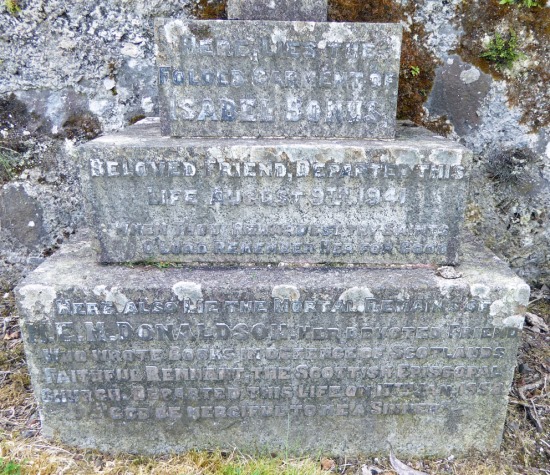 HERE ALSO LIE THE MORTAL REMAINS OF
M.E.M. DONALDSON, HER BELOVED FRIEND
WHO WROTE BOOKS IN DEFENCE OF SCOTLANDS
FAITHFUL REMNANT, THE SCOTTISH EPISCOPAL
CHURCH, DEPARTED THIS LIFE ON 17TH JAN. 1958
"GOD BE MERCIFUL TO ME A SINNER"
© ornaverum.org All rights reserved