Possible link between Donaldson and Findlay

James Muir and his household were censussed in 1881 as follows (thanks to ancestry.co.uk for these data): 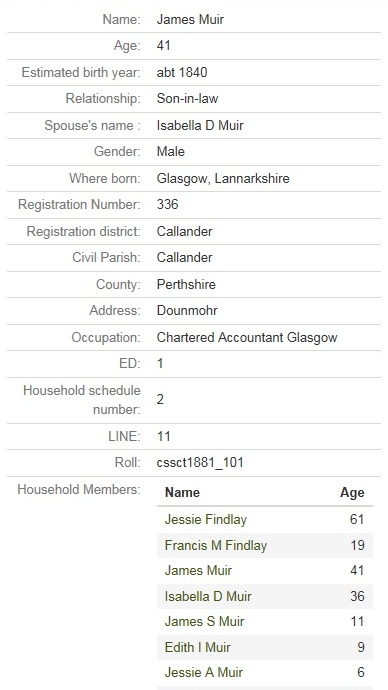 The household occupants can be divided into three categories:

Dounmohr was hers in her own right, though after her death it became a haven for the Findlay family (Hannah and Val were brought up there after Charles Farquharson Findlay's early death, for example).

So now we know that James Muir was born in about 1840 (dying on 8 Dec 1898). Does this help us to establish that he was the brother of Mary Isabella Muir who married Alexander Donaldson?

Mary Isabella Muir and her parents' household had been censussed in 1861 as follows (thanks to ancestry.co.uk for these data too): 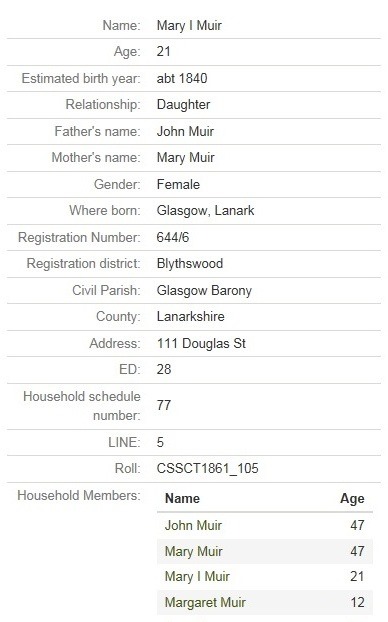 The household occupants can be divided into just two categories:

No sign of a brother James, then – apart from the unusual age-gap between the two sisters. There could easily have been several other siblings in between them, and a brother of 20 or so would certainly have left home by 1861 – and not included in the census, therefore.

Thanks to the ScotlandsPeople.gov.uk website, we're enabled to look more closely into James' parentage, using his known date of death. His death certificate can be downloaded, and provides the names of both parents. The image-quality is, however, absolutely dreadful, as you can see, and so I've mocked-up a facsimile of his details.

Dead of double pneumonia at only 58, despite a comfortable professional life-style and salubrious residence just opposite Glasgow's Botanic Gardens in Kelvinside. But managing to outlive both his parents, James Muir (an opifex of hats, in the true sense of "Manufacturer") and Mary Anne (née Armour) Muir.

And so Mary Isabella Muir and James Muir Jr definitely sprang from different parents, a beautiful hypothesis thereby being slain by an ugly fact.

So the possibility of a Donaldson ~ Muir ~ Findlay link looks hopelessly tenuous, but there remains another possibility of connecting Donaldson with Findlay, and indeed is in plain view: regardless of whom she married, Isabella Donaldson Findlay got her middle name from some earlier connection between Donaldsons and Findlays. But would those Donaldsons have been of the same strain that led to Mary Ethel Muir Donaldson?

And there I'm going to have to leave it for the time being.