As per the links below to the hand-drawn family tree meticulously draughted by my late Uncle Alexander (Sandy) Waddell, and the various biographies (for which I'm extremely grateful to my brother Simon) that Sandy put together from various sources. A considerable number of further details have now been inserted into his schema, but nothing prior to it is yet (Nov 2014) available.

Origins of the name

The Findlay surname comes from the old Scottish name Fionnlagh / Fionnlaoich, meaning "fair hero" - from the Gaelic elements "fionn" meaning white or fair and "laoch" meaning warrior or hero, and associated in song and story with the legendary (but real-life) hero, Findla Mor ("Big Findlay") Farquharson, reputedly of gigantic stature (well, for those days anyway) who fell at the Battle of Pinkie in 1547. 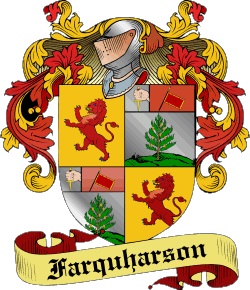 The Old Gaelic words of "fear" and "char" combine to create the name Farquhar which means "dear one". It was a popular Celtic first-name, and was to be found all over Scotland in the Middle Ages. As a surname today however the form "Farquharson" (son of Farquhar) is more common.

A warrior named Fearchar Shaw founded a dynasty who took the name Farquharson. The Findlays (Finlaysons, Finlays, Finleys, and other similar such names) are generally regarded as a sept of the Farquharsons.

It's a lively-looking coat of arms, but how genuine or appropriate is entirely open to question!

Nothing lifts the spirits like a nice brightly-coloured map, and that's a good excuse to display the counties of Scotland in technicolour hues (cheerfully disregarding the Four Colour Theorem) – specifically Angus (2) and Fife (13) on the East Central coast just to the south of Aberdeenshire (1).

The town of Arbroath, the stamping-ground of 'our' Findlays, is about half-way up the coastline of Angus, known in those days (until 1928) as Forfarshire.

The detailed map reproduced below might well be helpful, not least to me. 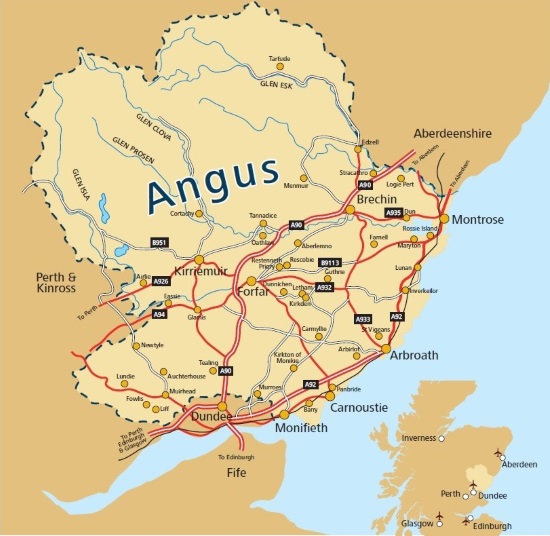 Not featuring explicitly in the Generation Table below, but implicit in so much of what eventuated, the remarkable stories of John Ritchie (3 Feb 1778 – 21 Dec 1870) and his younger brother William1,  2 (1781 – 4 Feb 1831), who was in many ways the more remarkable of the two, can't easily be integrated into this narrative.

Sandy thought, probably on the ever-unreliable basis of family legend, that John and William were twins, elder brothers to Margaret Ritchie (4 May 1736 – 10 Feb 1819), but these beliefs aren't supported by their DOB's. I'm still (Nov 2014) unable to establish the true degrees of kinship between the Ritchies and Findlays in that era. They were probably both in very modest walks of life, only traceable via parish registers. I think this may well require intensive on-the-spot expertise from a professional genealogist – I understand the Angus archives do offer a research service at £20/hr, which might be worth considering at some point. I believe they would be able to access any original documents which still exist.

There's reason to believe that the 'newspaper Ritchies' were not closely related, if at all, to Margaret Ritchie, and that the two families were actually connected via Elizabeth Johnstone, whose mother was a sister of John and William Ritchie. This is borne out by the Ritchie monument (see below) which describes Elizabeth as John Ritchie's niece.

Note also that the Ritchie brothers were born in Fife, which though close at hand, isn't actually contiguous with Angus (please see the map above).

Please click here and here for further details of the remarkable Ritchies and their ensuing generations of Ritchie Findlays.

Details given in black are transcribed from Sandy's family tree; corrections in red are taken from the Ritchie monument inscriptions, and those in grey from www.thepeerage.com (or directly from Jen (Findlay) Guerin, from whom thepeerage are fortunate enough to source their best information) or from the Findlay memorial inscriptions.

The Muirhead family seem to have been quite closely linked with William Renny Findlay #1 in several ways. I'll just mention one or two of them that have been brought to my attention, and further details can be found from the excellent webpages cited above (in the second of which I notice a handsome acknowledgement to Simon Potter, who has been an enormous help to me as regards our Little (and Martin) connections.

I believe the WRF #1 and James Muirhead households were adjacent, and two of the Findlay children were middle-named Muirhead, and one of the Muirhead children was first-named Findlay.

And a witness to signature of WRF #1 in the legal notice of 20 Jan 1857 cited above was John James Muirhead, described as jeweller – he was evidently now a partner in the family business.

We do generally prefer documentaries about cuddly marsupials to drama, but me and Mrs Robin did recently watch The Hand of Lucia, one of the fifth series of TV episodes (2017) based on G K Chesterton's short stories of Catholic priest and amateur detective Father Brown, which featured the instantly recognisable Hetty Baynes as the notorious Lucia Morell. Definitely very Grand Guignol, straight from central casting as they say, and exactly what the role required.

When Mary Spencer Watson died leaving her £2m house, Dunshay Manor, to the Landmark Trust, a building preservation charity, in March 2006, her partner Margot Findlay Baynes (by now senile, but represented by her 3 children other than Hetty Baynes) and Margot's daughter Hetty each began litigation to try to secure money from the estate. The charity decided to contest these claims to protect the late Ms Spencer Watson's 'ardent desire' to preserve Dunshay intact as a memorial to her parents. On 14 Jul 2008 both claims were rejected by the High Court thus safeguarding the gift to the Landmark Trust, and on ca 11 May 2009 Hetty's appeal was dismissed.

You will inevitably notice that I haven't tabulated a great many of the branches of the Findlay tree that Sandy compiled so assiduously. It's not that I regard them as intrinsically less worthy of attention – it's just that I can't recollect ever hearing about them in my childhood or early adulthood, and so their names don't resonate with me. And also, there are virtually no internet resources from which I could bring more to their party – I could contribute no more colour and depth to the details that Sandy has already provided.

An intriguing link just discovered is Robert Farquharson Findlay, born on 5 Jan 1860 in Angus (then Forfarshire) to Charles Findlay and Isabella Farquharson:

His paternal background can with a fair degree of trustworthiness be traced to one James Findlay (b ca 1793):

A warm heathery tartanesque whisky-laden Compton Mackenzian peat-fiery glow seems to suffuse ones imagination when visualising the Highlands' and Islands' distant past, but the realities of life in those parts, right up to the mid-twentieth century, were often harsh and indeed brutal, particularly when the English or their Hanoverian troopers got involved. No place for a soft southron such as myself to go sticking my nose into, albeit my finest feature. And not necessarily easy territory through which to trace ones roots.

But I would like to assess the credibility of the Findlay and Farquharson connections with two of the oft-quoted figures from the misty Middle Ages (though real enough themselves), MacBeth and Finla Mhor, and perhaps a few lesser figures too.

It must be emphasised at the outset that, as far as I am aware, they have absolutely no documentary or lapidary tie-in with our earliest credible ancestor Robert Findlay (1742-1802) who married Margaret Ritchie on 8 Jun 1765, as per the Generation Table above.

The dictionary definition of a sept seems to imply a genealogical connection between the various individuals (or families) identifying with it.

Wiktionary: A clan, tribe, or family, proceeding from a common progenitor.

Collins English dictionary: A clan or group that believes itself to be descended from a common ancestor.

So in this sense, even a major clan could be said to constitute a sept. But in everyday usage, a sept seems to refer to a minor clan that benefits long-term by an economic or political affiliation with a major clan, even if there is no genealogical connection between them. This finds support from Wikipedia:

Wikipedia: In the context of Scottish clans, septs are families that followed another family's chief, or part of the extended family and that hold a different surname. These smaller septs would then be part of the chief's larger clan. A sept might follow another chief if two families were linked through marriage, or, if a family lived on the land of a powerful laird, they would follow him whether they were related or not.

Perhaps it is significant that only one family member in the Generation Table above – my great-grandfather Charles Farquharson Findlay – carries that middle name, so evidently it wasn't generally thought of as being of particular relevance. I'm genuinely disappointed about this as the Farquharsons were and are (Robert Crampton notwithstanding) a colourful and resolute bunch, aka the "Fighting Farquharsons", and were in longstanding contention with the Erskines, quondam Earls of Mar, whom I document in another Connection.