WRF #2, a warehouseman with his own business, lived in the family home at 19 India Street, Glasgow, and in due course married the girl next door but one, Elizabeth Margaret Fyfe Easton of 15 India Street. Before you say "Ahh, sweet", it went downhill as things turned out.

They had five children born in Scotland namely Sara, WRF #3, Felician, Samuel and Harvey, (Felician and Harvey dying young). Then the family emigrated to Melbourne, Australia in 1884 on the steamship "Clyde". In Melbourne, WRF #2 became a Commission Agent §, travelling up and down the coastal ports.

A further child, Cyril, was born in 1886 in Melbourne – a very strong contender as the black sheep of the family. Definitely persona non grata and not talked about. I digress, I'll leave that story for another day.

In the mid 1890s the daughter Sara returned to Scotland and married well.

Then in the late 1890s the adventurous brothers Samuel and WRF #3 moved to South Africa at the start of the Boer War. Samuel joined Bethune's Mounted Infantry and WRF #3 was a grain & feed merchant supplying the British forces. They both stayed on and married in Johannesburg to English and Scottish women. 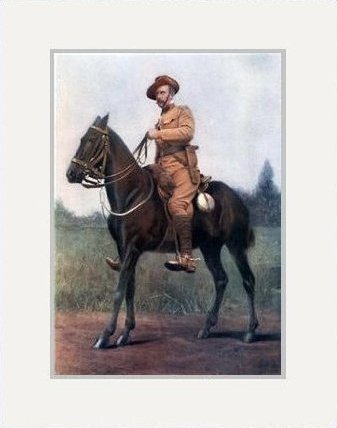 Sara's Scottish husband died, leaving her very well off. She later married a Swedish land surveyor, travelling up and down Africa, living in a tent with him, before buying a farm and settling in South Africa too.

WRF #2 himself remained in Melbourne, dying alone and penniless in a rented room in 1925; he was found dead in his room by a police officer.

The cause of the break-up with Lizzie is unknown - as far as my dad (Kenneth William Findlay, son of WRF #3) was concerned his grandparents had been wiped off the slate, and he didn't even know their names. In fact it was a schoolmaster at Dad's boarding school who told him that his grandfather had just died in Australia; the grandfather had never been mentioned at home, before or after his death. Another contender as the "black sheep" I think.

My dad had the good fortune to be born in Stirling, near Callender, before being taken back to South Africa aged 5 months. I was the first generation to be born out of Scotland. Finally after over a hundred years of my Findlays living abroad, I returned to the UK in 1994 with my husband and two children, who were born in Botswana when we lived there for 18 years.

My daughter says "nomad parents, nomad children". She has recently returned from two years working in Australia, where by amazing coincidence she was, for a while, living about six blocks from the cemetery where WRF #2 is buried. She took flowers and some photographs, and I'm sure she was the first family member to visit the grave.

There are at least another three, possibly four, of Charles Farquharson Findlay's brothers contending for the "black sheep" award; it makes a very interesting story and I've been meaning to write it up for some time.

Commission agents--also known as commercial agents--work as middlemen between vendors and buyers. These individuals find employment in myriad industries for large and small businesses, depending on their area of specialization. Commission agents work in countries throughout the world and may seek work from a number of employers simultaneously if their field of specialization provides the opportunity to do so. These expert purchasers and vendors provide a valuable service to their clients.

In general, commission agents purchase and sell items on behalf of a principal, usually a company. The nature of the job depends on the field of employment. Agriculture produce commission agents who work for small businesses, for instance, travel to farms and orchards, purchasing fruits, vegetables and dairy products for principals such as grocers and restaurants, or sell such items to grocers and restaurants on behalf of farmers. These individuals work independently as contracted, third-party workers, not employees of their principals. Commission agents conduct business under their own names, which affords a measure of anonymity to their principals while allowing the agents a certain degree of autonomy. As experts in their field, commission agents can assist small businesses in making the most of their limited budgets.

Freedoms and Responsibilities of a Commission Agent

Commission agents possess a fair amount of freedom when it comes to purchasing or selling materials for a principal. Usually, principals outline their material needs and a project's purchase budget, or the desired price of sale, along with a set of preferred conditions for a deal. The commission agent is responsible for meeting the ideal conditions requested by the principal, and must stay within the provided budget or the price of sale. As long as commission agents conform to these stipulations, they possess the freedom to act and make deals as they choose.

The skills required of a commission agent depend on the industry in question. A livestock agent, for instance, requires very different skills than a commission agent in the coal industry. Broadly speaking, purchase commission agents can quickly identify the value of an item or lot, assess the profit potential of that item or lot, and create an offer at a price reasonable for the vendor and sure to make a profit for the principal. Vendor commission agents perform a similar function, but sell items rather than purchase them. Doing this job requires quick thinking, good verbal communication, the ability to barter, strong interpersonal skills, networking ability and a firm understanding of maths, economics, markets and related law.

The name "commission agent" arises from the method by which these professionals earn a living. Commission agents earn a commission for each job performed, usually a percentage of the profit realized from the items purchased by the agent. Working with a commission agent saves small businesses with limited budgets the cost of hiring a commercial agent.

These individuals often work across national borders and for international corporations. Commission agents are protected by the laws of their home country regarding issues with their principals, but they must adhere to the laws of the nation in which they work, as well as international regulations.

From the job description reproduced above, one can well imagine how useful and well-rewarded an honest and competent commission agent can be, but equally well, how quickly he would be discredited and shunned if he were seen to be shady or inept ...