The Findlay and Gueritz Connections

As per the links below to the hand-drawn family tree meticulously draughted by my late Uncle Alexander (Sandy) Waddell, and the various biographies (for which I'm extremely grateful to my brother Simon) that Sandy put together from various sources. Happily, a great deal more information has subsequently come to light, particularly from Angus Findlay and William Gueritz, and will now be incorporated as appropriate.

eg My grandmother Jessie Frances Hannah seems always to have been known as Hannah and never even admitted to her first forename until later life when she had to distinguish between herself and my Aunt Frances Hannah, as they by that time both had the surname Waddell and both banked at the same branch of Lloyds in Chichester.

eg My aunt Margaret Jane Valentine was always known as Jane, both within her own family and in the outside world.

eg My uncle Robert Erskine was always known as Robin (as am I), and my uncle Alexander Wingate as Sandy, both within the family and in the outside world.

eg My father, whose preferred forenames or ekenames evolved steadily throughout his life!

Note however that diminutive names such as Annie, Jessie, Minnie etc were often used as given names in Victorian times, just as Harry, Sally etc nowadays often are.

At some point in their early childhood, Val and Hannah Findlay were put into the care of their Aunt Jessie, known in the family as Dannie¶.

Whether this was before or after their father Charles Findlay's death in 1883 I don't yet know. But it was around that time that he was written-out of the family script, and ceased even to be mentioned within the Findlay family. He was treated as though he had never existed.

His wife Annie (Cosby) Findlay effectively dropped out of the story too. It is possible that she too may have died, in 1886, as public records suggest, but it was also averred by my Aunt Jane that my father Walter was taken to visit Annie in his early childhood some thirty years later. In fact it is now known that she lived on until 1920.

What dreadful thing had Charles Findlay committed, and why were his children so swiftly removed from Annie's care (despite the fact that she had at least three brothers and a sister who could have come to her support)?

These issues were first aired by my grandfather Robert, with the possibly reluctant acquiescence of Hannah, on learning about this dreadful conspiracy of silence, and thereby incurring the bitter hostility of Hannah's elder sister Val. But there the trail goes cold for another four generations. I only heard of it quite by chance a few months ago (mid 2012), and was immediately intrigued.

Maybe Charles Findlay was a bad 'un, but maybe he was the victim of character assassination, a not infrequent pastime within the families concerned.

Empowered by the internet, I've already let some daylight and fresh air into this entire scenario, but further progress remains to be made...

¶ This was probably Jessie Smith Findlay, a natural aunt, or might possibly have been Jessie (Black) Findlay, married to Daniel Smith Findlay – hence perhaps the familiar Dannie – had these latter not emigrated instead to Australia (where Daniel went bankrupt) and thence hastily to Canada. 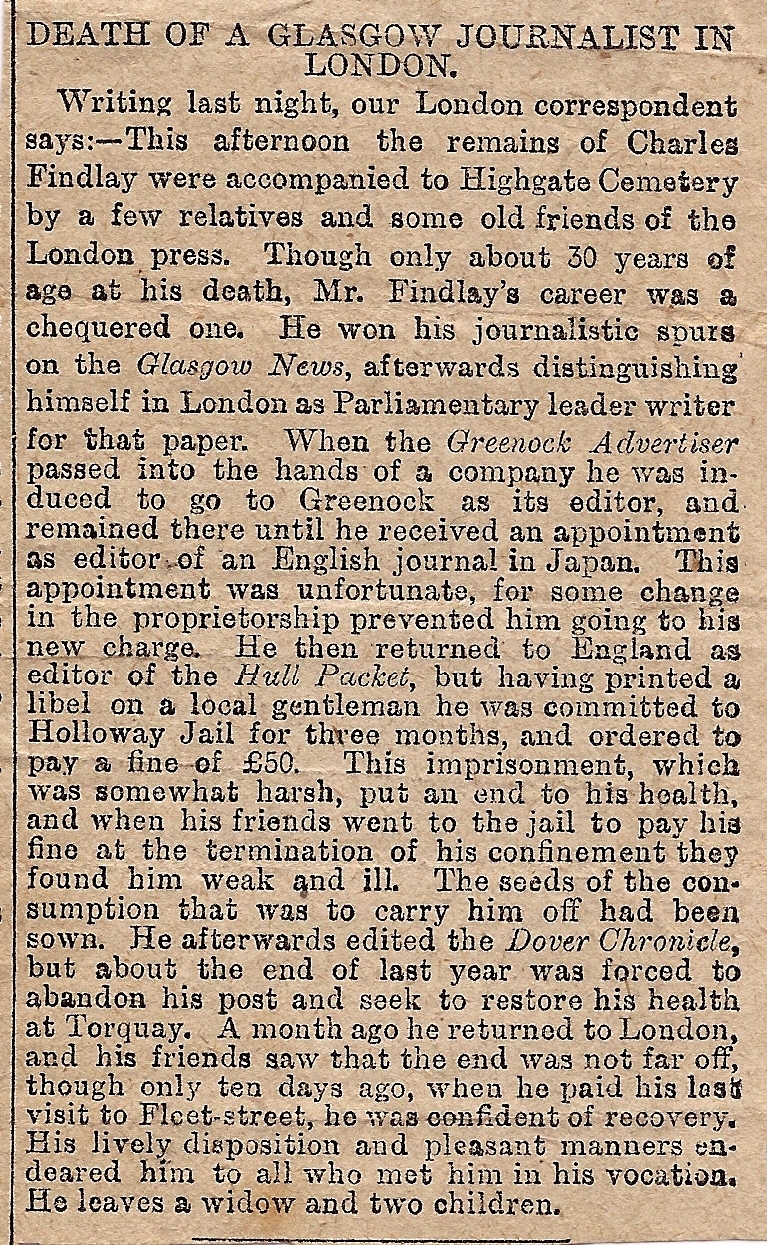 This account of Findlay's removal to the cemetery was clearly written at some point between his death on 15 Sep 1883 and his interment on 20 Sep 1883 as per the letter reproduced below. 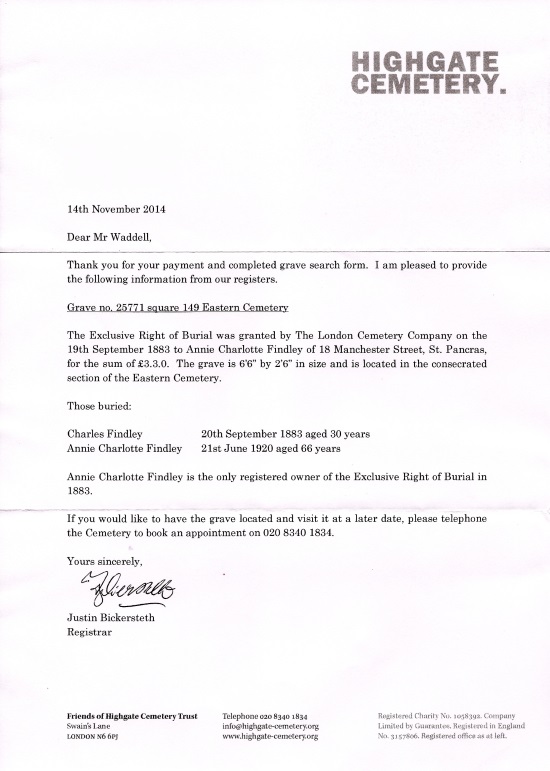 This (in addition to telling us where we can go to pay our respects) also implies that Annie Findlay was still in "in the frame" at the time of her husband's death, as she was making the arrangements for his inhumation. She was also planning ahead so that in the fullness of time she would be buried with him (as per the box below, no pun intended) – although, strictly speaking, the grave is dug "double depth" anyway, so that somebody else completely unrelated could be buried above the lower coffin when the original 100 year lease has expired.

Graves have to be dug to a sufficient depth to allow for future burials to take place. Therefore the grave needs to be deep enough to allow not only for the depth of coffins/caskets that will be buried but also to accommodate the legal requirements of undisturbed earth to be between each coffin and the amount of earth that must cover the last interment. In some older parts of our cemeteries graves used to be dug to 9 foot and even to 12 foot depth. Nowadays the deepest graves are dug to 6-7 foot depth to allow a second burial at a later date at the 4-5 foot depth. The actual plot size of a full size grave is 8-foot by 4-foot although this is not the size of the grave that is dug. The standard grave size that is actually excavated is 7' 2" by 32" in a coffin shape. This size will always be dug unless it is a child's grave which will be 4' by 24" by 4 foot deep or we are made aware of any dimensions that exceed the standard size.

Anyway, she did want to be buried with him, and she was – so much for all the stuff about her having deserted him. BTW, the dates given in the letter are of burial rather than death.

Some time in the new year (2015), if anno domini doesn't get me first, I shall go and visit Chas. and Annie and hopefully return with a nice photograph of their plot.

But our own (purely geographical) removal intervened in early 2015, and that plan was shelved. However, a very capable researcher has now (Aug 2018) completed the mission on my behalf. 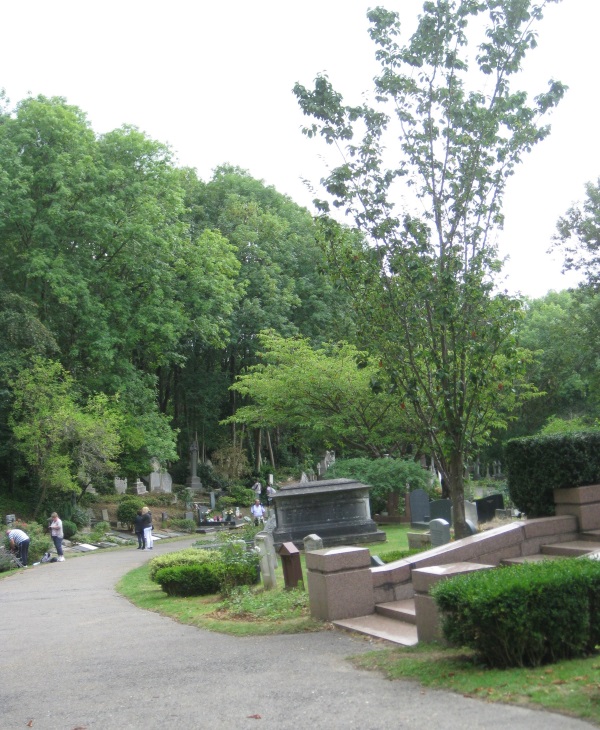 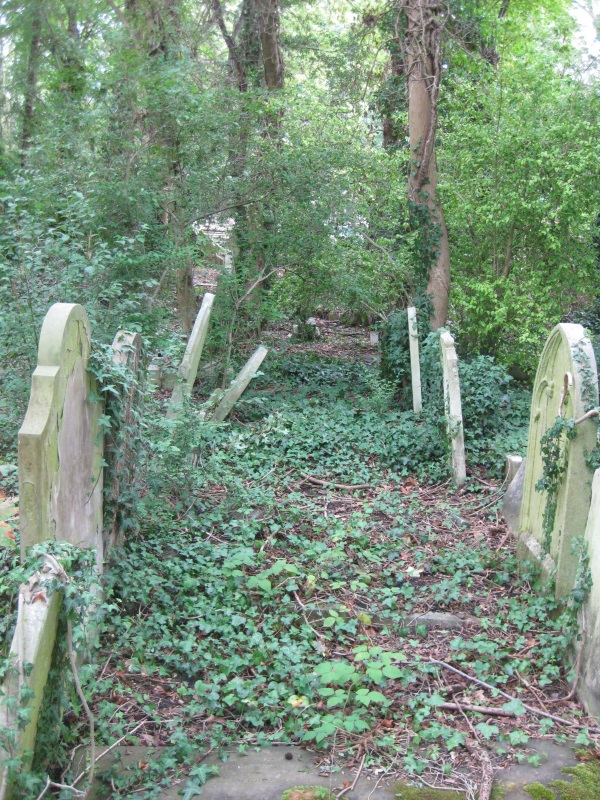 Findlay plot long view (beyond headstones between the trees). 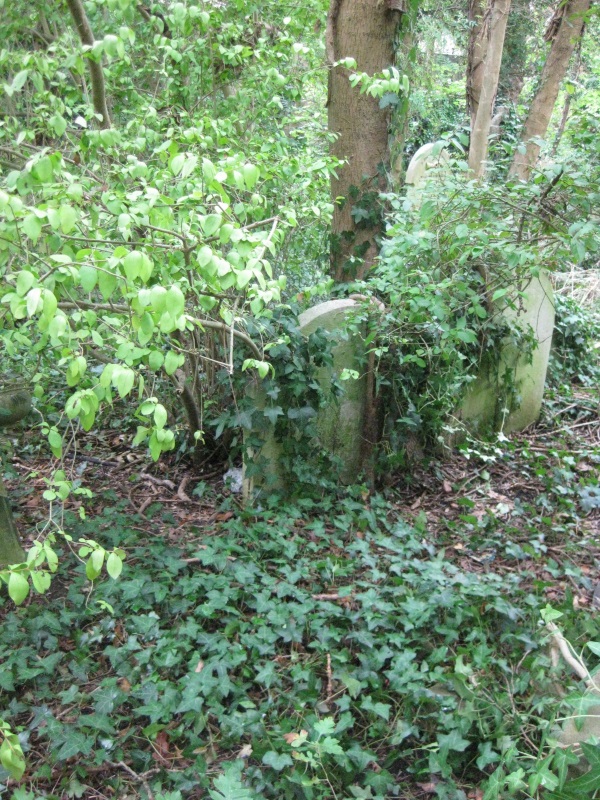 Justin Bickersteth advises that the cemetery registers give no indication that there was ever a headstone, or ledger stone, to memorialise the occupants of the grave. Indeed, Annie would probably not have had sufficient funds on Charles' behalf, and following decades of counter-briefing and character-assassination it's unlikely that his family stepped in to pay for a joint memorial to them both, or even just to him, after her death 37 years later.

The earlier Gueritz lineage is very intriguing, and equally distinguished. I'm indebted to the website www.thepeerage.com for the details of Sir Charles Elton's numerous family displayed in this next table:

One must always remember, however, that no source, even from within the family, can ever be regarded as unquestionably authoritative. And neither can I.

But where did the family name originate? Rather like that of Michael Portillo, the best Prime Minister Britain never had, it was Spanish in origin. I'm indebted to the websites www.familylink.com and www.ancestry.co.uk for most of the details of the Gueritz family displayed in this final table. The family tree of Andrew Gueritz was very helpful as regards the many offspring of Mary Louisa Gueritz and the Rev Reginald Arthur Mortimer.

See also an invaluable two-page typescript, found in the Normandy archive. And also this brief but compelling testimony of Rev Mamerto Gueritz himself:

My paternal grandfather Juan Gueritz (or Guerich) was a native of Louvain. (I have no record of his early life, but from my mother I learnt that) he was a legal advocate and that having engaged in a duel in which his adversary was killed, he fled to Spain and enlisted in the Royal Walloon Guards in which corps there were many of his own countrymen. Here he rose through all the ranks to Brigade Serjeant with the rank of Captain in the army.

He married a Spanish lady Doña Antonia Fabre and had two sons, my father, Jose Francisco and Manuel. The latter died in his youth. Of my grandfather's history I know nothing more than that he served in the War of Independence against the French and was killed in the celebrated Battle of Baylen in 1808 leaving his son José affiliated to the Regiment of Walloon Guards (see Certificate No. 1)

This section is admittedly transitory, a WIP.

The historical DNA of every family of any consequence, and that means almost all of us, is revealed in the recurrence of their given names – the present-day surname is of course a reflection of current circumstances: women generally take their husband's name on marriage, gay couples often conjoin their surnames, as do the offspring of unmarried Caribbean parents. But to dig down deeper, the back-history is to be found in the first and middle names of the offspring.

As I and my brother Simon were christened (or baptised, if you prefer) with the middle names of Erskine and Findlay respectively, which originate from long ago in Scotland, the Gueritz family perpetuated the surnames of their west-country English forebears – Lawrence and Fortescue, though the name of Spettigue was a vital link (but not quite such a euphonious one).

And likewise as my wife and I have afflicted our offspring with the forenames or middle names, John and Henry, of her father's Lunenburg ancestors.

And this is therefore, as evolutionary biologists or particle physicists would put it, the Grand Synthesis, the Unified Theory – the furthest back I can take my account of the fascinatingly convoluted English origins of the Gueritz family. Their equally intriguing Spanish origins have of course already been chronicled.

I'm deeply grateful to my latterday cousin William Gueritz for sharing so much helpful information and pointing me in the right direction in these regards.