This very informative unsigned document is part of the Normandy archive, and provides valuable information about the distant ancestors of the modern Gueritz family, specifically Juan Gueritz, Jose Francisco Gueritz, and Mamerto Gueritz. First, though, I'm providing a bit more background (for my own benefit) and a summary of the typescript, which is quite difficult to follow in places.

Historically, we English referred to the soggy, low-lying estuarine coast and hinterland between NE coastal France and NW coastal proto-Gernany as the Low Countries. They had a complex history, and were for a long while a turbulent part of the Spanish (Hapsburg) Empire.

Fast-forwarding to the modern era, they comprise

It's a bit confusing that "Netherlands" means "Low Countries". And that "Holland" sounds suspiciously like a corruption of "Hochland" meaning "Highland", though is actually derived from an Old Dutch word "holtlant" meaning "wood-land".

But this tidy resolution lay far in the future when Juan Gueritz was born in the Wallonian city of Louvain, probably in the early to mid 1770's. His forename would have been Jean rather than Juan, and the suggested alternative surname of Guerick has a resonance with the renowned 17th century scientist Otto von Guericke.

Jean would have morphed into Juan when he escaped to Spain and joined the renowned Royal Walloon Guards, who were certainly involved in the celebrated Battle of Bailén (Jul 1808) at which Spanish forces comprehensively trounced a Napoleonic army of occupation. Though, sadly, Juan himself died in the battle, he had taken the precaution of leaving two sons to continue the family name.

The younger son, Jose Francisco Gueritz, ten years old by this time but already a 'child of the regiment', immediately enlisted to follow in his father's footsteps with the Royal Walloon Guards, and had a distinguished military career with them. Eventually, however, political turmoil obliged him to escape to England in 1824, where he subsisted by teaching French. His wife and infant son Mamerto managed to rejoin him in 1826, but his health was broken and he died in 1832, leaving his son, Mamerto, and daughter to be brought up by his widow.

After that, the typescript is a pretty straightforward – and very helpful – account of Mamerto Gueritz's education and ministerial career, and needs no further exegesis from me. 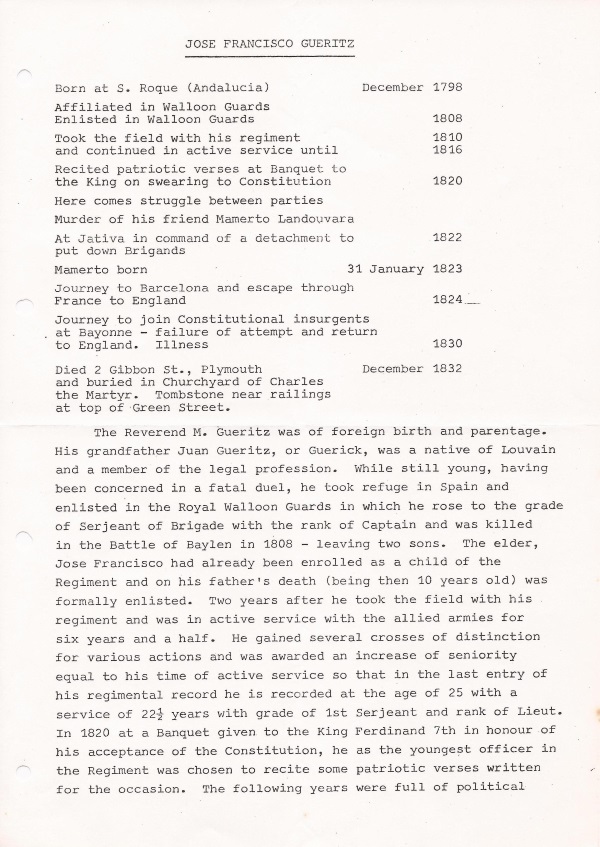 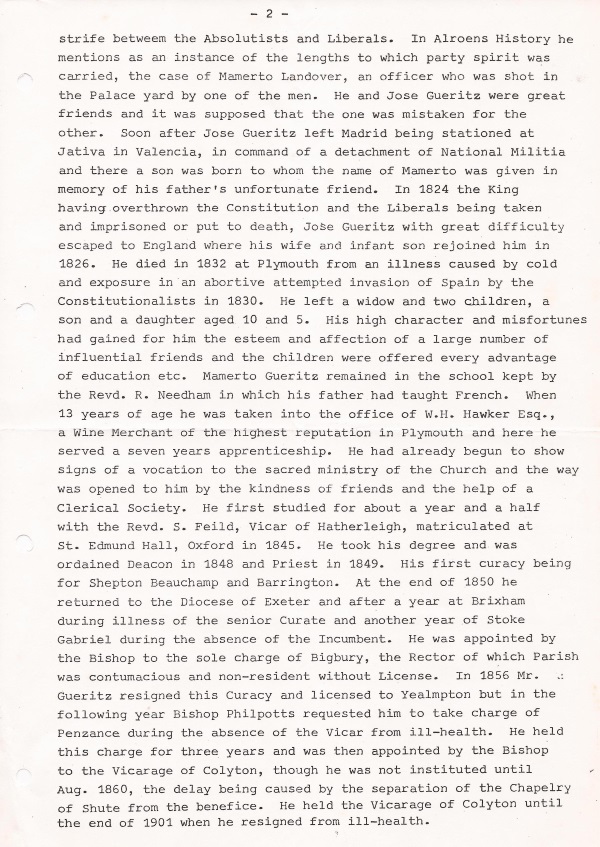