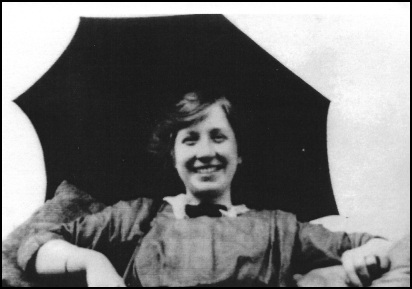 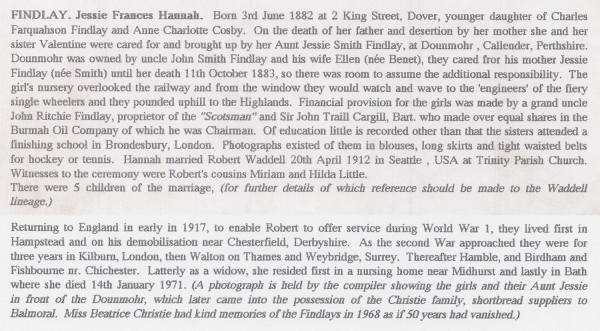 [Here and there in Sandy's very substantial documentary legacy, one not infrequently notices inaccuracies as to dates. Here, for example, Hannah Findlay is said to have died on 14 Jan whereas her obituary notice in the Daily Telegraph at the time had it as 12 Jan.]

For details of her childhood please click Jessie Smith Findlay.

Although outwardly calm and even undemonstrative, but always filled with quiet delight on family occasions, she had two close and happy friendships over the years, the earlier with Mary Ethel Muir Donaldson, and the later with Phyllis Stewart-Smith.

Ardeer what can the matter be?

I’m grateful to William Gueritz for this very significant cutting – both Jessie and Val would in due course decide to be re-baptised into the Anglican / Episcopal church. I can’t speak for Val, but it was said within the Waddell family that Hannah was drawn to the mystic ritualism of the Anglican High Church by her lifelong friendship with ‘Uncle Tonal’ (M E M Donaldson).

The report, of which this is only a small fraction, continues almost interminably but its importance to posterity is that it places Hannah and Val Findlay, at the tender ages of 11 and 12 respectively, as being affiliated to the United Presyterians, a very select percentile of Calvinist Protestants – doctrinal distinctions were jealously guarded, and had they not been baptised as such they wouldn’t have been allowed to participate in the event.

But who were Mrs Lundgren, Mrs E W Findlay and Miss Findlay? Ardeer was of course the tail that wagged the dogs of Stevenston and Saltcoats.

Mrs Lundholm was almost certainly the wife of Gustav Henrik Lundholm (1861 – 1925), a Nobel technical expert seconded to Ardeer. Jessie Smith Findlay was very attracted to him, but felt that her gynaecological condition would preclude a happy marriage, and so he married someone else.

Mrs E W Findlay was the wife (Marie) of Edward Walton Findlay (1848 – 1898) and Miss Findlay would almost certainly have been Jessie Smith Findlay (1847 – 1941) herself, the children’s guardian. Jessie and the children were probably on a visit to the area and possibly staying with Marie and Edward.

The elder son of the house Edwyn Alfred Findlay (b 27 Mar 1882) was in the same age-group as Val and Hannah – he was to become a keen offshore sailor, and a buddy of one Robert Waddell, also an offshore enthusiast, who would in due course marry Hannah! I have somewhere a pair of gold cufflinks each of which is engraved EAF on the one side and RW on the other.

Surely one of the most extraordinary escapades of Hannah Findlay's unconventional early years was her baptism, and that of her elder sister Val, into the Church of England at St Cuthbert's Mission Church in the East End of London on 30 Jun 1899.

The building of St Cuthbert's Mission Church had been commenced on 14 Oct 1897 by the laying of its foundation stone and was to be effectively undone on 6 Sep 1940, courtesy of Hermann Goering. It was located in the Isle of Dogs, at the junction of Westferry Road and Cahir Street. (Neighbouring thoroughfares Harbinger Road (Donne), Hesperus Crescent (Longfellow) and Spindrift Avenue (Florence Craye) bear the incongruous imprint of poetic influence.)

Joking aside, it was extraordinarily fortunate in its first incumbent, the Rev Richard W Free1,  2 – and his most supportive wife. I get the impression firstly that he was a comparatively youthful clergyman, possessed of great charisma, and secondly that it was one of the most squalid areas of the most insalubrious quarter of London – not all that far from, or long after, the Jack the Ripper murders in the late 1880's.

What were two well brought-up young Scottish girls doing down there, and why? And how has it remained sub rosa for so long?

Their mother Charlotte Annie Cosby, of Irish lineage, was either Roman Catholic or Presbyterian (probably the latter), and their father Charles Findlay was either Episcopalian or Presbyterian. So it's very likely that before his untimely death both daughters were already baptised into whichever leaning of Christianity prevailed. But the baptismal register makes no mention of this, not even to annotate the ceremonies as Conditional.

Furthermore, both girls were minors, as the age of majority was still 21 in those days. It's quite possible that Hannah, at least, was still living at home in Callander, Perthshire, with their guardian Jessie Smith Findlay. How on earth did they get permission to absent themselves? Whose influence had persuaded them to go so far from home? To the cesspit of the Empire, indeed?

In my view, there were just two (or maybe three§) people who could possibly have inspired them – Annie Cosby, their mother, or May Donaldson who (if she were indeed close kin) was perhaps already Hannah's spiritual lodestone – though she herself was not to transition to Anglicanism until 1907.

The baptismal register gives Hannah and Val's address as 57 Dynham Road, West Hampstead. Is that really the nearest they could safely stay to the Isle of Dogs? Otherwise, with whom, or near whom, were they lodging? Annie lived just a mile or two to the east in Camden Road, and May lived just eight miles to the south in Croydon. It could have been either of them.

I don't suppose we shall ever know for sure, but full marks to the resourceful Findlay sisters for such an enigmatic adventure.

§ The third possibility is the Rev Richard Free himself, though indirectly. Callander, where Val and Hannah lived from early childhood, was just 44 miles north by east of Glasgow, a city with slums as appalling as any in (Great) Britain. And a St Cuthbert's Mission Church was opened in Barrack Street, off the Gallowgate, in 1902. News of its imminence would certainly have spread, and Hannah would certainly been aware of it – and as we know that she was involved in social relief work in the poorest parts of Glasgow in years to follow, perhaps this was the catalyst of her determination to play her part.

But the story of Richard Free's ministry would have made an earlier impact still, and quite possibly inspired her, and Val also, to make the long journey from Callander to East London to be baptised by such an exceptionally admirable evangelist.

Visit to Victoria BC

In early 1962, at the age of nearly 80, Grannie travelled out to Victoria BC, off the Canadian north-western coast, where she would spend the summer and early autumn with her younger daughter Jane, who had emigrated there a couple of years previously.

I can find no trace of her outward or return journeys by boat (passenger records appear to have been multilaterally discontinued in 1960, even for transatlantic voyages), and plane-flights have never left any trace behind in any case, so there's no way of establishing her precise dates or means of travel out and back.

It was yet another difficult time for me, ultimately self-destructing in my first and only year at the University of Nottingham, but I do seem to remember, very indistinctly, being present on the quayside in Southampton as she was being courteously assisted up the gangway aboard (possibly) one of the old Cunard Queens (Mary or Elizabeth) which sailed only to New York and not to St Johns, Newfoundland, which would have been more convenient. Transatlantic airflight was probably still regarded as too arduous and inappropriate for those, such as Grannie, of maturer years and more reserved and decorous temperament – though of undiminished resolve and adventurousness.

From New York, she would then have continued by transcontinental railroad to Vancouver, where Jane undoubtedly met her at the massive Pacific Central Station 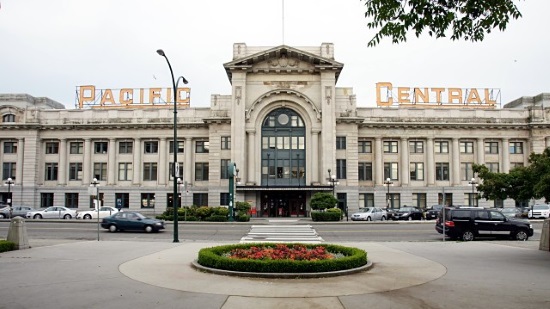 thence to accompany her on the last leg of the journey by ferry to Victoria BC, capital city of British Columbia, though located offshore on Vancouver Island. 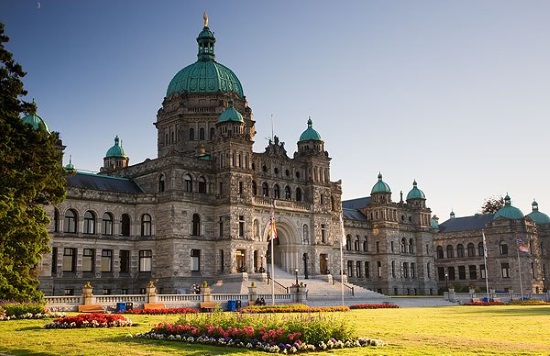 By all accounts, Grannie had a wonderful time there, loved Canada and Canadians and they loved her. For the remainder of her days she always hoped that I would relocate there too, away from all the corrosive parental atmosphere that persisted for a further 4½ decades – if only ... (though Sonia and I did visit Jane ourselves, in 2003 and (post mortem) 2013 – what a wonderful city, what a spectacular setting). 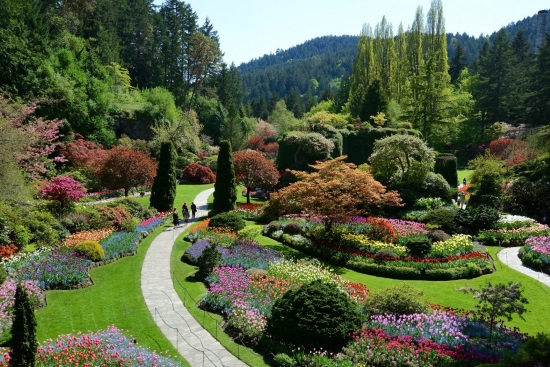 But what of Elm Lodge meanwhile? Was it locked and shuttered? In fact, it had been leased to an Australian-born actor, by then in his mid-thirties, who was already well established, and would become one of the best-known faces in British theatre. He was about to undertake a number of leading roles at the newly-commissioned Chichester Festival Theatre, and needed some well-situated accommodation on which to take a lease for the summer. His name was Keith Michell.1,  2

These days, the summer season at the Chichester Festival Theatre extends from April to November. In that inaugural year of 1962, the theatre opened its doors on 6 June, the initial productions being The Chances (1638) by John Fletcher opening on 3 July; The Broken Heart (1633), by John Ford, opening on 9 July; and Uncle Vanya (1896), by Anton Chekhov, opening on 16 July.

Keith Michell played the lead, Don John, in The Chances and then Ithocles in The Broken Heart. And doubtless other parts in other productions too. 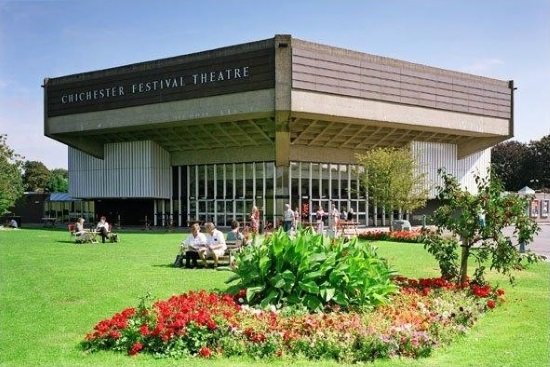 In those early days I believe the summer season ran until September, a good six months, and so the letting of Elm Lodge might well have lasted at least six months, bearing in mind all the rehearsals and other preliminaries beforehand.

Even if Michell had moved on to other work before the festival season ended, Grannnie would undoubtedly have stayed on with Jane in order to enjoy the splendour of the Canadian fall season. And then she would have wanted to hasten home before the icy grip of winter disrupted long-distance travel, and indeed, like Mole hankering for his dulce domum, she would have wanted to ensure that Elm Lodge was in good shape for the hibernal rigours in prospect.

The Michells had of course left Elm Lodge in perfect condition, and had also left a memento of their stay – a striking picture he had made in pen and watercolour of nearby Bosham quayside, and gratefully inscribed. 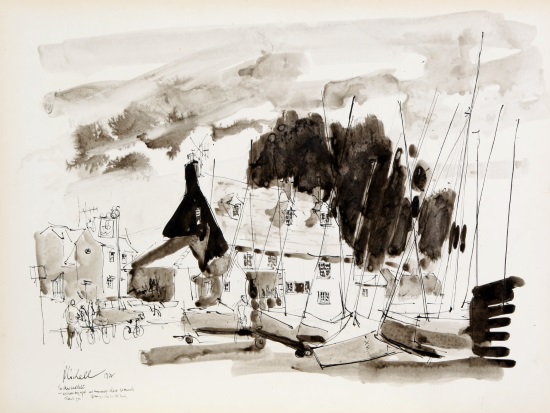 For Mrs Waddell
– we have enjoyed ourselves here so much
Thank you!Jenny & Keith Michell
© ornaverum.org All rights reserved