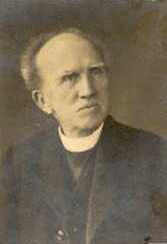 Initially just a signature on a Register of Baptisms, the Rev Richard Free has become a major figure in my recent investigations, and the more that is discovered the more there is to admire.

And indeed, he has become a cousin by remarriage, as one might put it, as will become clearer. So one feels an indirect personal connection as well.

P G Wodehouse's indelible image of Aunt calling to Aunt, like mastodons bellowing across the primaeval swamp, can be updated to the affinities of cousinly DNA acting across some intangible biochemical internet, even if only by proxy and at several removes.

He looks very reminiscent of the Rev Harold "Stinker" Pinker, the muscular Christian who boxed for Oxford, and played rugby for England, in the Bertie Wooster stories, and might very well have held "Battling" Bilson to an honourable draw in the Ukridge oeuvre, had Wodehouse only brought them together.

Setting aside such fancies, let's try and deal with the heap of stuff that has come to light from a variety of sources – Jen Guerin, Aunt Jessie Findlay, and the almost limitless archives of ancestry.co.uk, to all of whom I express my gratitude.

Especially helpful as regards Richard Free's family background has been the ancestry entry detailed below (though we mustn't take it as gospel). I've only summarised the individuals and their BMD dates in the Generation Table, of course, and you'll need to see all the geographical details on this link. Both his grandfather John Free and father Richard William Free Sr seem to have moved around the country a good deal, and for that reason I'm rather sceptical about their social station.

The details given above for 'our' Richard William Free's parents and grandparents may actually pertain to another family entirely, despite fortuitous coincidences, but the moment arrives when one has to cry a pox (or plague, according to preference) upon the doubters and cavillers, and to publish and be damned.

The ancestry.co.uk details given below are especially helpful as regards Richard Free himself.

His father Richard William Free Sr was documented on our hero's matriculation record at the University of Oxford in 1891 during those class-conscious times as a gen[t] (ie gentleman, a man of independent means), but as mentioned above that seems unlikely as the gentry tended to stay put. There are indications that he was a dairyman, an honourable occupation, except of course for those who surreptitiously watered the milk or flogged the unpasteurised product to an unsuspecting public who thereby contracted tuberculosis in large numbers.

Or he may have been a woollen(s) merchant, possibly a shopkeeper – which would be no less grand a livelihood than that of William Renny Findlay (qv below). The iron rule of Victorian snobbery was that a Smith and Wesson (inherited wealth) beat five aces (earned wealth).

Another wobbly datum is Ellen Alexander Findlay (née Benet)'s date of birth – always a tricky detail for a woman marrying for the second time, as it has to be committed to paper when signing the Register of Marriage. (My mother lived to regret her economy with the truth in that respect.) Some sources give Ellen's DoB (specifically or by implication) as 1852, some as 1857 – that's a big difference if you're a teenager as Ellen was at the time of her first marriage, or if you remarry and your husband is hoping for children.

(My private theory is that Ellen's father Alexander Benet was of French origin, and of Protestant persuasion, and that Ellen might well have been born in France, which would account for the lack of birth certificate. Richard may well have encountered her during his time as Minister at the Orange Street Chapel in 1887-89.)

Even when a woman's age was recorded by the decennial census-taker, he often simply made a guess at it, and would have erred on the side of gallantry. The atrocious handwriting of the census-takers, and the lack of any census-date on the form itself, both make for further obscurity and uncertainty in even wider respects. And there must be an especially uncomfortable seating area reserved in Purgatory for those complacent fathers who name their sons identically with themselves.

On Ellen's first marriage certificate, both her husband and she herself were recorded as being "of full age", euphemisms in this case for a gross disparity in ages (she was barely 14 and he was almost 30). On her second marriage 22 years later, she allowed her age to remain consistent with her earlier marriage, and so I'm taking that to be a trig-point...

...though the 1871 Census, while recording her first husband's age correctly as 29, gives hers as 23, implying her year of birth as having been 1848, and that she would actually be eleven years older than her future second husband. A bit of a Shady Lady.

I'm sorry to bang on about this, but such discrepancies do bother me, and remind me uncomfortably of my maternal relative for whom the truth was whatever she chose it to be at any particular moment.

Our Richard was a man of many parts – a graduate of both the University of Glasgow and (in Theology) the University of St Andrews, a prolific historian, an autobiographer, and a tenacious man of God who won the hearts of his hard-boiled East End parishioners.

The following undated cuttings were pasted into her family cuttings-book by Jessie Smith Findlay in early or mid 1905. 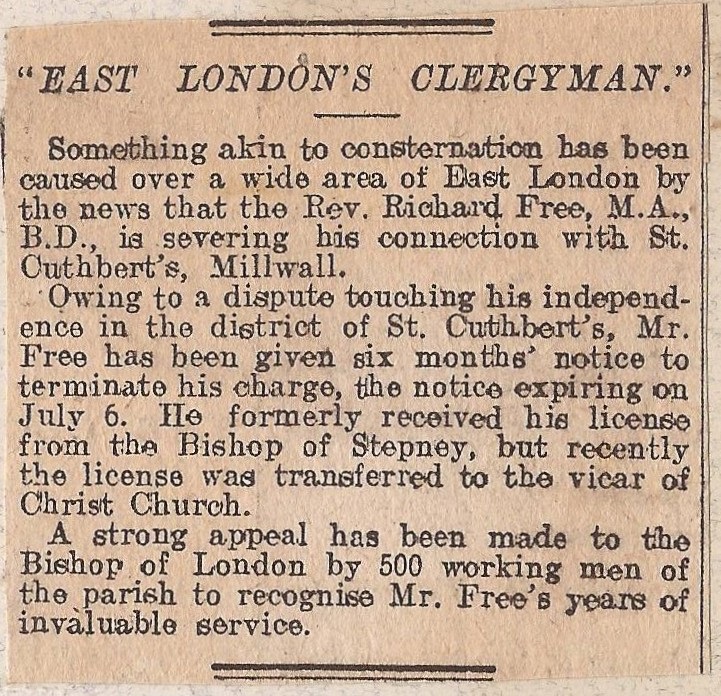 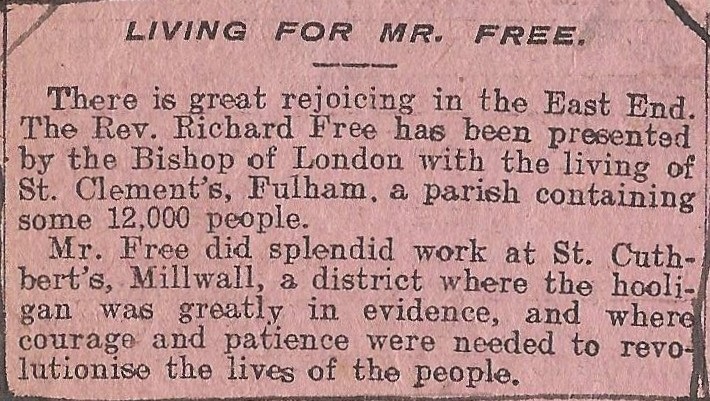 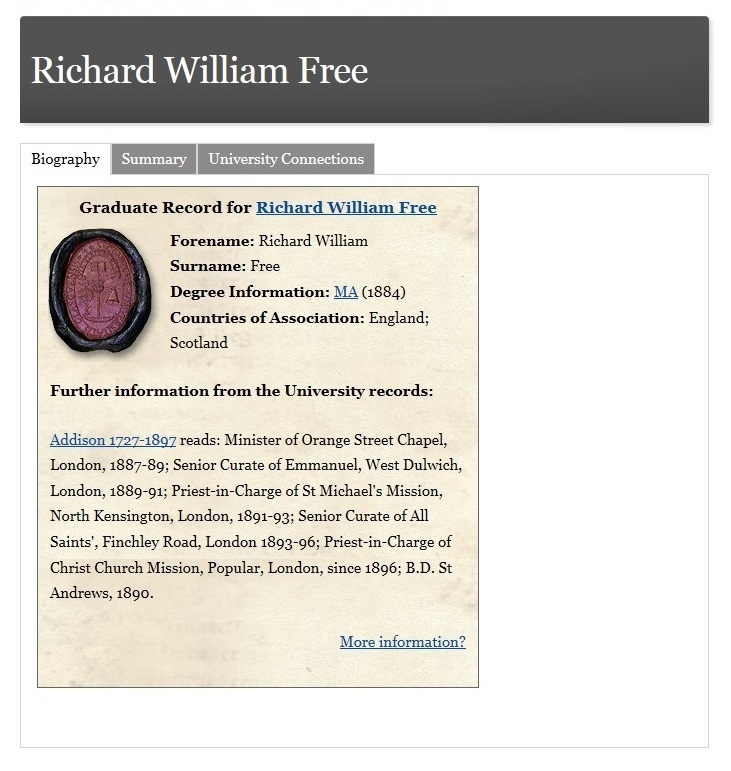 So far, sadly, the University of St Andrews (the third oldest in Great Britain) seems unable or unwilling to reveal the academic records of those they regard as unglamorous or humdrum students of yesteryear.

So I can find no details about Richard Free's degree of Bachelor of Divinity in 1890. Fortunately, the University of Oxford is more forthcoming about his matriculation (ie registration to commence a degree course) at Oxford in October 1891. 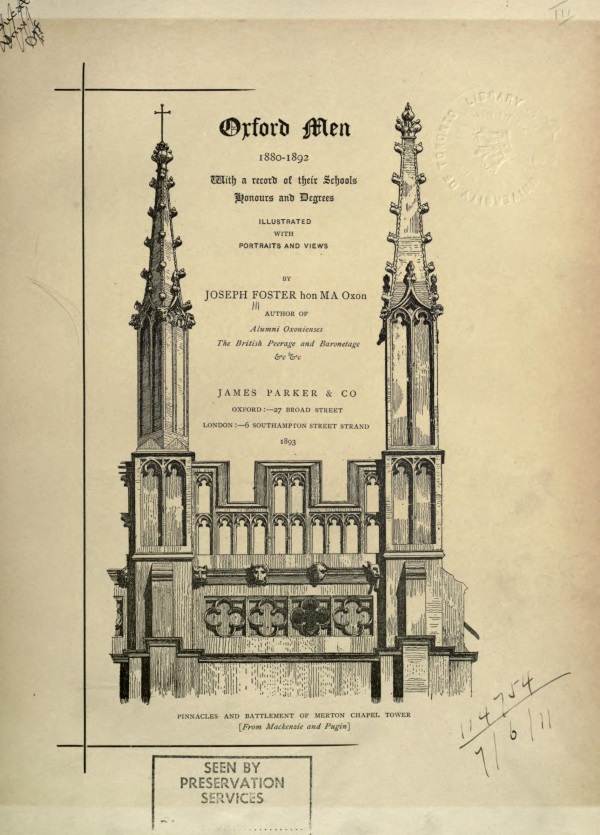 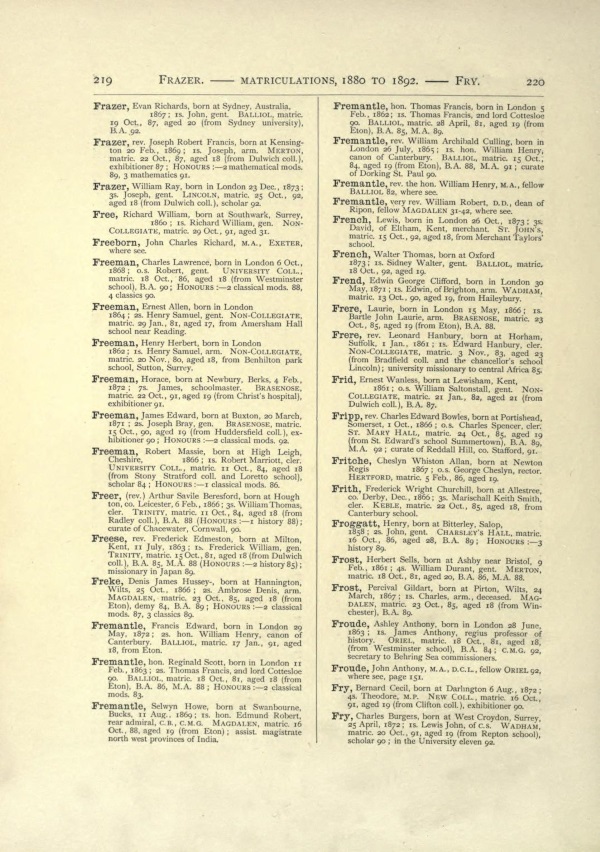 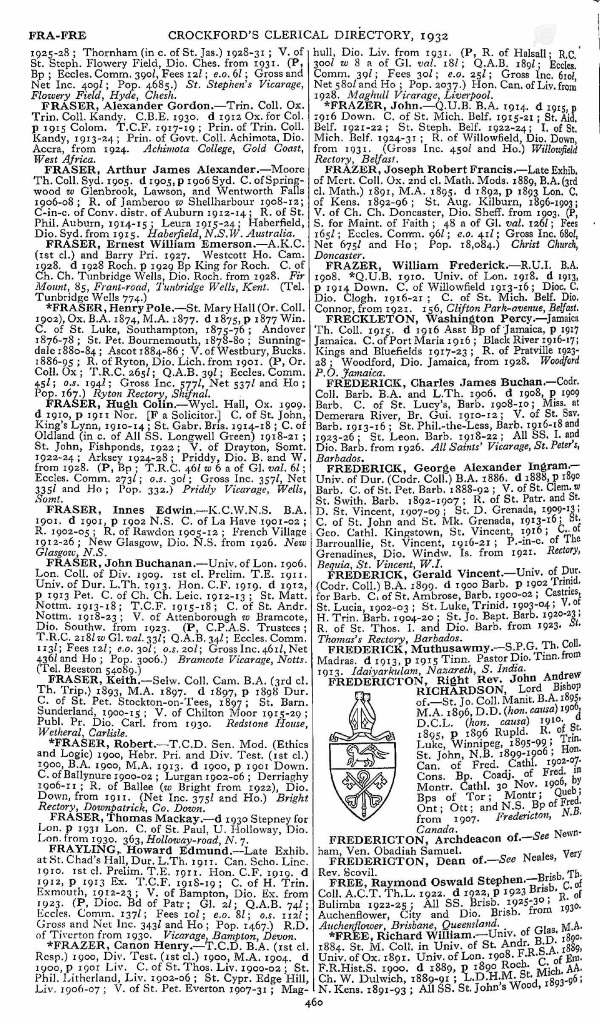 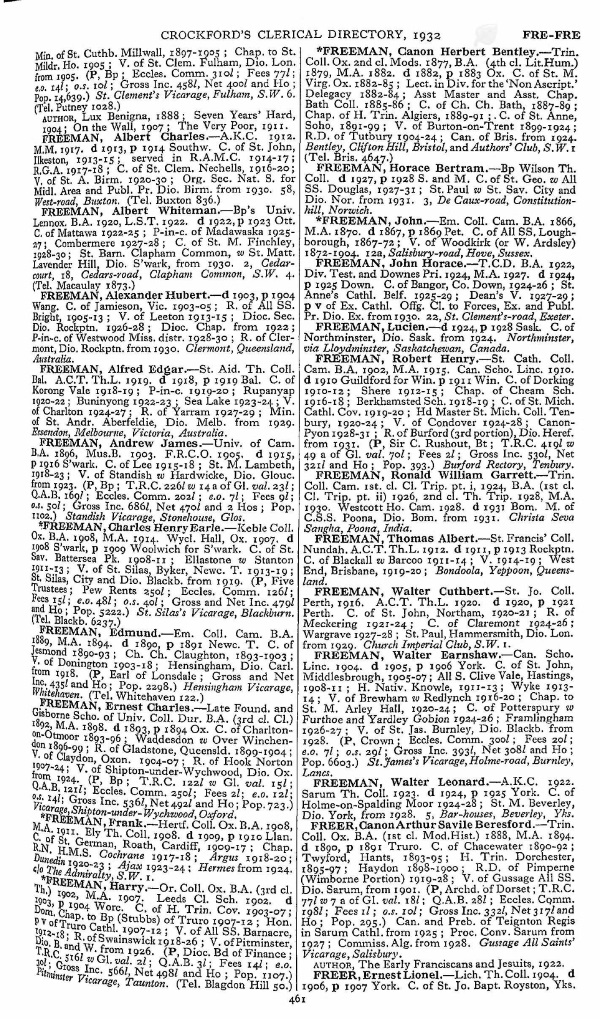 Fellow of the Royal Society of Arts, 1889

Fellow of the Royal Historical Society, 1900

He was a most prolific author (sometimes using the nom de plume Richard Le Free). See below for an account of his published works as of 1921. 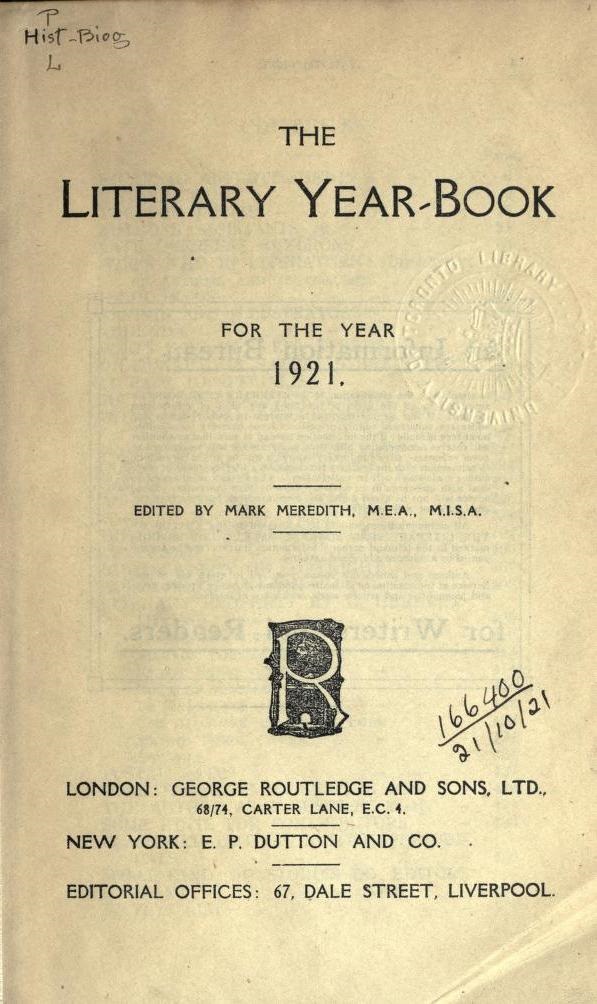 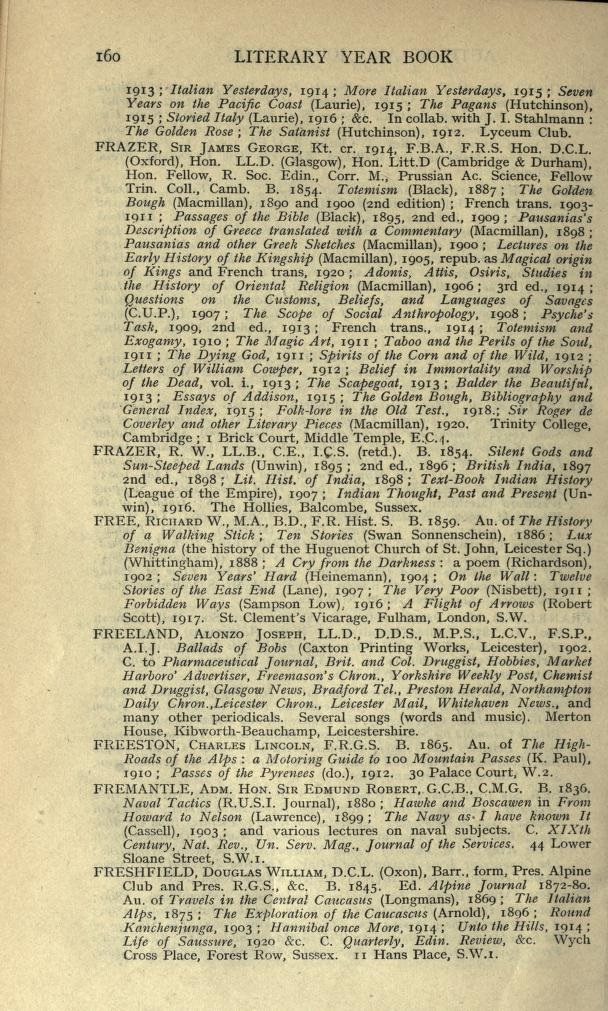 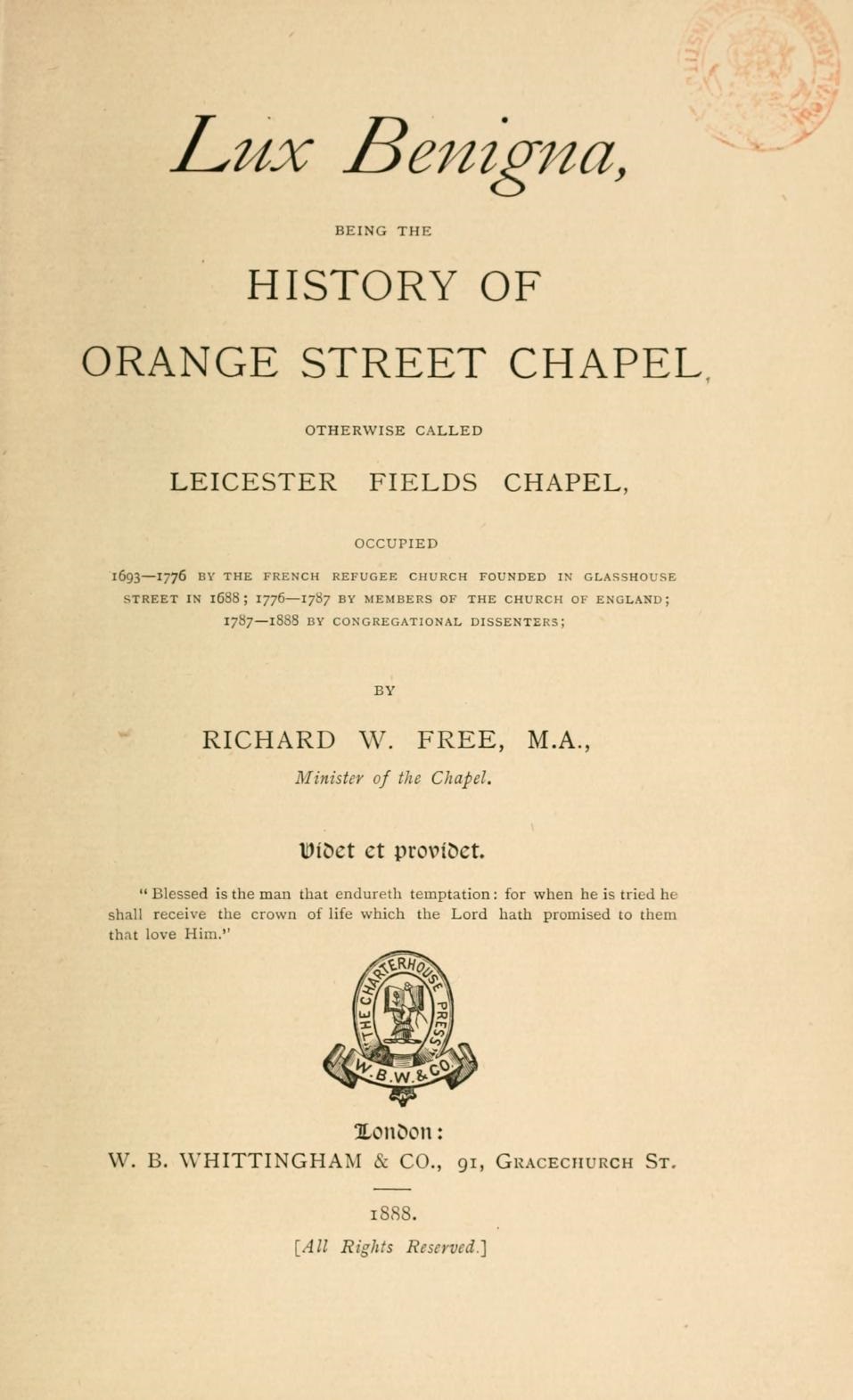 To which must be added the following later works.

(different sources give different job-titles, so I've tried to steer a middle course)