Some years ago the Island History Project produced a short history of The Anglican Church on the Isle of Dogs. I was able to make a small contribution to this project. During the years since then I have written accounts of two of the other Island churches, St. Luke's and St. John's, but a short account of the Mission Church of St. Cuthbert has lain uncompleted. Sadly much of the available material that I had, has, as a result of old age and several moves, been lost, but enough has remained to compile a brief history of St. Cuthbert's, West Ferry Road, built at the junction with Cahir Street. The site in more modern times became part of the Harbinger Street school playground.

Built in what a London Diocesan paper described as the most squalid part of the district on a site given by Lady Margaret CHATERIS, the foundation stone was laid 14 October 1897. The Survey of London describes it as being designed in the quasi-domestic Tudor style by J. E. CUTTS and J. Cutts, it was built by J. E. JOHNSON of Limehouse. It consisted of ground floor clubrooms and a first floor church. An organ gallery was added in 1900.

The Mission District served by St. Cuthbert's was part of the Parish of Christ Church. The first Mission Priest was the Reverend Richard FREE. When he was appointed in 1897, he and his wife had to live south of the river. Because of the shortage of housing he commuted to his work by ferry. The ferry ran from Horseferry Road on the South Bank across to Ferry Street (where it joined Saunders Ness Road).

After a few months the couple obtained rooms at 1 Ingleheim Cottages (St. Cuthbert Lodge). Despite its upmarket name it was described as a terrible old shanty crawling with lice. It had eight rooms of which the missioner and his wife had five, the other two Richard Free opened as reading rooms. He was told that the house had, at one time, been a school and, at another, a beer-shop. Forty years before, the house had accommodated eight families. In recent years it has housed seven adults and 27 children.

The 1861 census illustrates the variety of occupations to be found locally. In that census the house was occupied by three families, those of a gas fitter, labourer and ships joiner; there was a working wife who was a glover and also a lodger who was a cordwainer. Any priest who was willing of his own free will to live in such a district in such living quarters clearly was one with a real commitment to his work, and his wife likewise. Free wrote and published an account of his life and work entitled Seven years Hard. Richard Free's arrival in the district was, it seems, greeted with noisy opposition. His first services were interrupted by the hootings, howlings and roars of laughter of disorderly fellows. The work of his Boys Club was badly disrupted. Gradually he gathered around him a band of helpers. Inspired by the work of Free and his wife a small but lively church community was built up.

In the Visitation return of a Sunday in 1905 he reported an attendance of 22 at the 8am Communion Service and 11 at 11am. Following the pattern of work usual in most Mission churches there was a plethora of clubs and organisations. These catered for the needs of young and old, men and women; among them is listed a Drum and Fife Band. All these required leaders and most of them, I imagine, were recruited from outside the district.

In the early 1920s the activities of the Mission were so successful that the space available was insufficient. In 1936 The London Diocesan Fund was persuaded to buy the freehold of a disused public house, The Glengall Arms, which stood close to the church. It was converted so as to provide a flat for the priest on the top floor, on the first floor a girls' clubroom and the ground floor became the boys' clubroom. Lack of funds was a perennial difficulty. Richard Free, in his book, writes of the desperate poverty of most of the local people. A good week's wage for a dock labourer was 24 shillings out of which some eight or nine shillings went on rent. In no way could the congregation raise the money needed to fund its activities and maintain the building. Money had to be raised from well-to-do sympathisers outside the district. Bazaars and Sales of Work opened by a Minor Royal were a feature of life in East London at that time. St. Cuthbert's had at least one such.

In 1937 a local newspaper reported that The Mission Church of St. Cuthbert's, Millwall is badly in need of repair. The Church and Hall were in a terrible state of dilapidation with water running down the walls. The annual Christmas Bazaar raised £14! The need for funds ceased abruptly at 3.15am on Sunday, 6th September 1940 when a bomb hit and destroyed the church. At 11.15am that Sunday morning, a service was held in the courtyard of a nearby block of flats. St. Cuthbert's had served its people until the end. 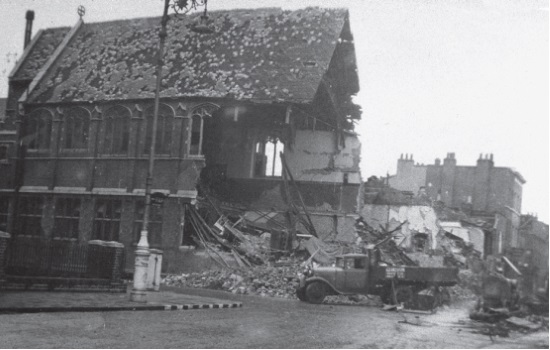 Arthur Royall passed away on 17 June 2013. He was a regular contributor to Cockney Ancestor and this is one of his articles which has not been published previously but we know he would have liked to see in print. Editor