As per the genealogy links below to the hand-drawn family trees meticulously draughted by my late Uncle Alexander (Sandy) Waddell (click here for background information), with appropriate amendments and extensions to encompass the newer arrivals of whom I'm aware, and the various biographies (for which I'm extremely grateful to my brother Simon) that Sandy put together from various sources.

These two trees may turn out to be identical, in which case of course I'll delete the second link. Simon has now detected some differences, so watch this space ...

To see some recently-established revisions to the Waddell line at a time of great changes in the early 19th century, please click

And to see how the Erskine and the Waddell lines joined up at that time, please click

eg My tragically early-deceased Uncle Robin was officially known as Robert but as an affectionate diminutive he was always called Robin.

Note however that diminutive names such as Annie, Jessie, Minnie etc were often used as given names in Victorian times, just as Harry, Sally etc nowadays often are.

Obviously there is a limit to how far backwards or sideways one can extend a family tree, and the zone of our personal interest is anyway probably demarcated by great grandparents and second cousins – sometimes rather less!

But even at greater removes there can be isolated individuals who command our interest and/or admiration. Three such ancestors were the trio of eighteenth-century Erskines whose engraved portraits hung benignly on our dining room wall in my early childhood. Who were they? And why did we have their pictures?

(And if you haven't already seen their likenesses, click here, here or here to meet the Godly gaze from those very prints with which I became first acquainted with them)

These Wiki articles incorporate text from essays on Henry, Ebenezer and Ralph in a publication now in the public domain

while Ebenezer and Ralph also feature in

Ebenezer Erskine also ventured into print on his own account in 1738, with a 152 page volume rather catchily entitled

The Annals of Redeeming Love, with the Redeemer's Vengeance Upon the Grand Enemy of the Redeem'd. Being Several Sermons Preached at Sacramental and Other Occasions, on Is A. Lxiii. 4. For the Day of Vengeance is in Mine Heart, and the Year of My Redeemed is Come. By the Reverend Mr. Ebenezer Erskine, Minister of the Gospel at Stirling

the original family copy of which (densely printed and clumsily bound) is now with my cousin James. A more legible version can in fact be ordered via Google!

Henry's life as a dissenting minister was evidently tumultuous. He was twice married: first, in 1653, to a lady of whom little is known, and again to Margaret Halcro, a descendant of an old family in Orkney. Contemporary estimates of the total number of his offspring varied between 12 and 33, though by his own account he had but twelve. His two distinguished sons, Ralph and Ebenezer, were children of the second marriage. The family was certainly impoverished, and it is said that when he could not give his children a dinner he would give them a tune upon his zither.

Ebenezer was a very popular preacher and a man of considerable force of character. He was noted for acting on principle with honesty and courage, seeming to soar into the empyrean in this photograph of his statue at the Valley Kirkyard in Stirling (click here to see the monument also erected to him in Stirling). 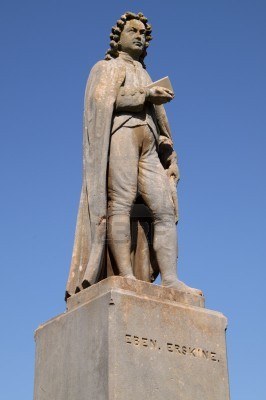 And the esteem in which Ralph was likewise held is evidenced by the life-size bronze statue on a pedestal not far from the High Street in the centre of Dunfermline. 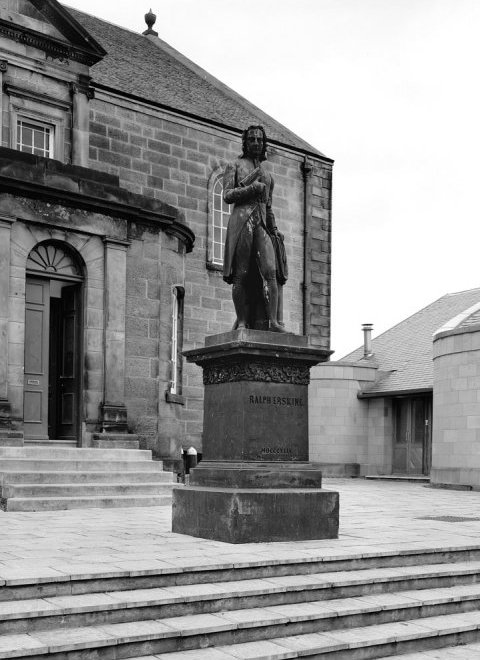 The subsequent linking of the Erskines and Waddells is documented in the family tree mentioned above, which is how their pictures came into our family possession; I'm extremely grateful to my brother Simon for supplying such excellent scanned versions of them, which are accessible not only from further up this Rude Forefathers section but also on the Erskines & Wardlaws page link in the opening paragraphs of this page.

Finally, rather a curious semi-legendary anecdote, probably concerning the second wife of Henry Erskine, and told to me on various occasions in childhood by my father, my aunt(s) and (most reliably) my grandmother.

It concerned a minister of religion (unspecified), long ago, sitting upstairs in his study by candlelight, grieving for his young wife who had (apparently) died suddenly and been buried earlier that day. Suddenly there was a creak of the door downstairs, and the sound of a delicate, but uncertain, ascension up the stairs.

"If my puir Maggie wisna deid and buried," he exclaimed, "I'd be minded that was her foot upon the stair."

Well of course, it was! She'd been buried with her only valuable possession, an ornate ring, and grave robbers had broken into her coffin and started to cut off her ring-finger. But the excruciating pain of this had roused her from her coma, she'd sat up in her coffin and the robbers had fled in terror.

The minister and his wife happily resumed their married life, and she went on to bear no fewer than twenty children. Funnily enough that does tie-in with the figures mentioned earlier.

But the oddest thing about the story is that almost precisely the same sequence of events is also recounted in an American setting at about the same era.

In fact, it gets better and better the further round the internet one searches. In one form or another, the story has evidently been an urban myth across Europe1,  2 for many centuries, as this link recounts. And one of the instances is indeed our ancestrix Margaret Halcro Erskine! So that's the true version, then.

If you've just visited The Balquhatstone Connection the following individuals may already be (potentially at least) your specialist subject on the Mastermind programme. But even so, or even if not, it's worth a moment or two to assess their role in redirecting the unrolling tapestry of family fortunes.

For Peter Hately Waddell (senior) the family fortune had in fact run out. His improvident father James had sold the big house, and young Peter was going to have to make his own way in the world. Which he did, with a staggering self-confidence, charting the course of his clerical career through the shoals and reefs of centuries of Scottish Protestant differences and dissensions, moving with the poise and assurance of a seasoned navigator, outwards to the Ultima Thule of his own personal church and then safely home again to the Church of Scotland.

And in fact, as far as I can tell, he was the first that ever burst upon that silent sea. There were no antecedent clergymen in the Waddell lineage. And he had undertaken this vocation well before his marriage to Helen Halcro Wardlaw of that impeccable Erskine ancestry. So, despite all his eccentricities and foibles, I'd like to raise my glass to him.

His second eldest son, William Wardlaw Waddell was certainly not a chip off the old block, but in some ways he redirected the family vector even more profoundly. Having entered the University of Glasgow at the tender age of 14 (though not so tender as Ralph Wardlaw who had matriculated there, on a course of theology, before the age of 12), he later proceeded to a family first by relocating south of the border to the University of Oxford, knocking them all bandy-legged before returning to Scotland to become an Inspector of Schools for the rest of his life.

William's younger brother Peter Hately Waddell (junior), was rather more in the paternal mould, ultimately ordained, and practising for 25 years until illness forced him into retirement, as a Minister in the Church of Scotland. But in between whiles, he too had qualified (like his brother William) with great distinction at the University of Glasgow, before moving (almost inevitably) to Balliol (just like William). And much later in life he was awarded a Doctorate by his alma mater the University of Glasgow for his religious publications.

There have been no more clergymen (or indeed women) of any persuasion since the Peter Hately's. But the family centre of gravity was now shifting inexorably, over a further generation or so, towards England – reminding us of that famous dictum, courtesy of my true hero Samuel Johnson, that the noblest prospect a Scotchman (sic) ever sees is the high road that leads him to England. And as always with Johnson, there is a grain of truth lurking within the rhetorical exaggeration.