Meg was born in Surabaya, the second surviving daughter of the family. Her father James was at that time employed by the Netherlands India Steam Navigation Company, with complete responsibility for the operation of their passenger and cargo vessels operating between Penang, Singapore and Java. After being headhunted in May 1892 by the Royal Dutch Company to be their General Manager in that same area, he discovered that the job was a poisoned chalice: in March 1893 he resigned, and the family finally returned to Glasgow. His health was broken and he was a semi-invalid thereafter. It has been remarked that the household at 19 Kelvinside1 Terrace South was not the cheeriest of places in which to grow up.

Despite this decline in the family fortunes, the children received excellent educations and all but Robert (who decided on a shipyard engineering apprenticeship) went on to graduate from the University of Glasgow.

The university website displays a very fine biographical profile on her behalf: 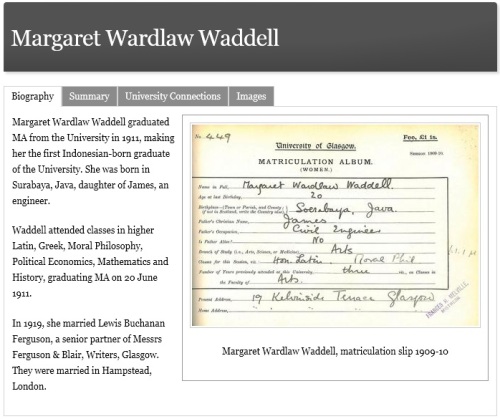 - click here to see an enlargement of her entry in the Matriculation Album.

Coincidentally, Meg's graduation record immediately follows that for Laurence Augustine Waddell, the extraordinarily polymathic individual who features on the Home page of this website. Meg and her older sister Mollie fortunate beneficiaries of the newly enlightened policy of Glasgow University that allowed women equal access to higher education there. Indeed, it is interesting to compare the (approximate) dates at which the principal universities of Scotland and England first permitted women to graduate with degrees of status fully equivalent to men. Admittedly London emerges top, but look who take the next three places ...

Meg was the youngest child of the family by some four years. Between Mollie and herself there had been another daughter, Helen Halcro Waddell, born two years after Mollie and two years before Meg. There seem to be no details of her save that she died at the age of about 2, just before or just after the birth of Meg. This was all too familiar a story in Victorian families even in the more salubrious British climate, let alone in the torrid zones of S E Asia.

But an inevitable consequence of these two factors was that Meg became all the more highly-prized and indulgently-treated, ie spoilt, as my Aunt Jane's memoir will reveal below.

The internet is silent as to how Meg spent the time between her graduation in 1911 and marriage in 1919. I'd be very grateful for any information about this period of her life.

As we lived in Derbyshire until the 1930s we didn't know our relatives who lived in London until we had to move there ourselves. But one situation arose in about 1928 which I remember clearly concerning our Ferguson first cousins Jock and Helen then about 8 and 5 years old. We never knew their father Uncle Lewis Ferguson. He appears to have been a quiet gentle person, a barrister. His wife was my Aunt Meg, the younger sister of my father, and she obviously was spoilt, unstable and an increasing problem, totally unsuited for domestic responsibility.

Uncle Lewis must have realised he was not long for this world so he begged his good friend Sir John Cameron, Bart (also a barrister), if anything happened to him would Sir John please look after his two children, which he did [agree to do]. Uncle Lewis was always very loyal to my Aunt Meg and even though she took desperately to drink he always maintained "There's no doubt about it, my Meg's a girl in a million". And soon enough, Uncle Lewis died quite suddenly (I don't know why) leaving Aunt Meg and her two children, she hopelessly addicted to the bottle.

The saving grace of the situation was a dear wee hunchback, Nannie, barely out of her teens, who loved Helen and Helen loved her, and she stayed with them and was a tower of strength to them both. [I think Nannie's real name was Annie, and she was almost certainly already a live-in nanny for the children, having her own rooms in the uppermost part of the house. I imagine that Sir John must have engaged a housekeeper to look after the other aspects of running the house.]

Sir John Cameron was a very wise guardian particularly over Jock and Helen's education. Helen was sent to Downe House boarding school, which seemed to suit her alright, and Jock went to a school called Stowe, which had only just been founded. Its headmaster strongly disagreed with some of the [existing] ideas of how boys should be brought up. He thought that all the bullying and very bad elements that were accepted as normal in boys' schools had no business to be there, so thank goodness Jock was spared that kind of schooling.

Jock became a journalist, on the Sunday Observer staff. He wrote under the name John Halcro Ferguson (there being too many Jock Fergusons around) and I frequently saw his stuff in our paper here "The Colonist", which later became "The Times Colonist" [in Victoria, British Columbia]. He was their (and Syndicated Press's) Special Correspondent for Latin America, and I would rate him as a Success Story, and on the few occasions when I met him I found him very charming and unassuming.

Helen became a doctor and married Ryland Lamberty and had a son John, but as both Jock and Helen died young (of cancer, I think) there was no further contact with their family.