I might be thought to be lopping the bed to suit the visitor, a tactic quite agin the notorious Procrustes' notions of hospitality, but it's easier to stick with the established procedure even for so brief a connection.

It's also a good example of what can be reconstituted from quite minor items of information (as the great palaeontologist Cuvier could reconstruct the entire animal from just its thighbone, and who was going to argue?). Starting with my Aunt Jane's obiter dicta that her husband Maurice Renaud had been born in London, of a French father who was a chef by profession, that Maurice was somewhat older than herself, and that he had lived in various other provinces of Canada before retiring to the same apartment block as herself in a sunny corner of Victoria BC (British Columbia), I was enabled by ancestry.co.uk to put together the following CV (family birthdates reckoned from Censuses).

Please note that the details added in red were obtained from documents that came to light subsequent to the death of my Aunt Jane (Waddell) Renaud, as per the Late-Breaking Updates section below.

Nobody has ever said explicitly that Maurice had been previously married, or maybe even have had a family, or even, though publish it not in the streets of Askelon, had ever stood on the wrong side of the dock, but that was probably all part of his weatherbeaten charm. Hypotheses non fingo.

The documentation is as follows. 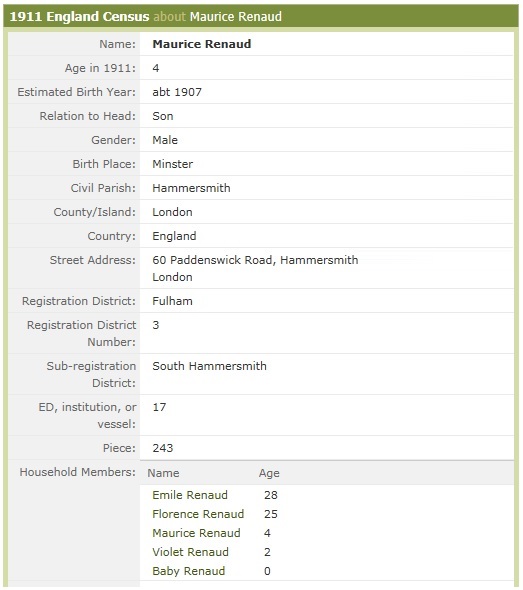 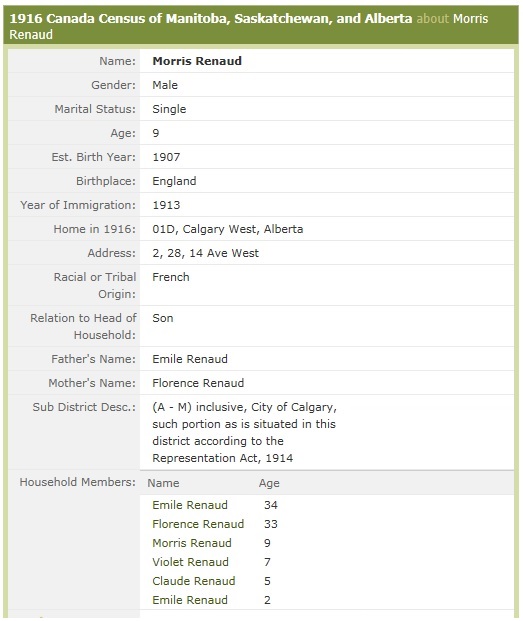 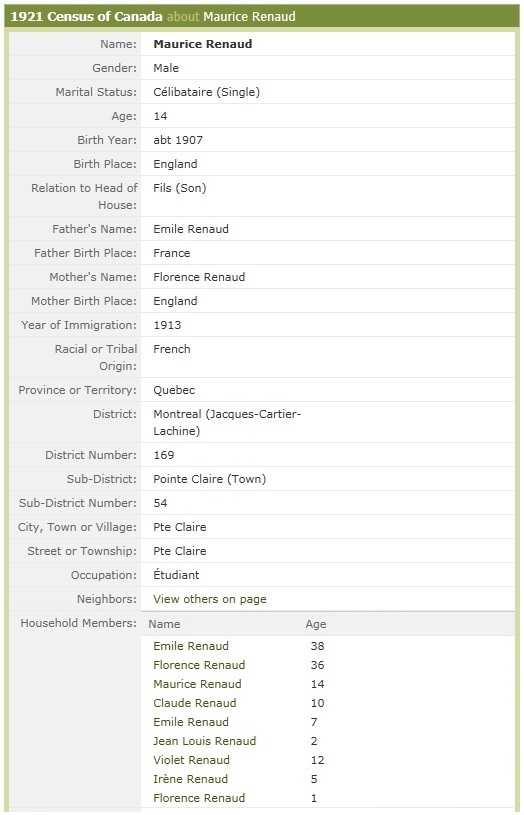 That, as far as I can tell from the Census data available, was the full family quota – a praiseworthy demographic contribution to their new Motherland.

Note however that all these documents aver that Maurice's year of arrival in Canada was 1913. How is this corroborated by the steamship companies' Passenger Lists? Well, we can be sure that Emile went on ahead in 1912 to establish a beach-head for the rest of the family: 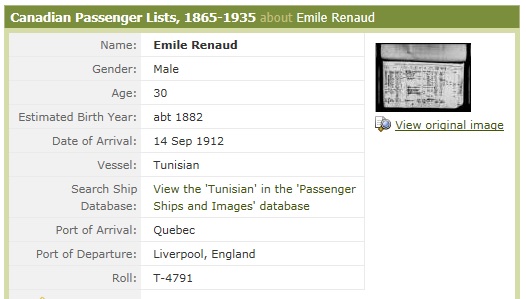 But that's as far as I can get via the ancestry website – the fault, dear Horatio, lies not with them but the passenger companies' incomplete records. I can't (yet) find a record of Florence Renaud shepherding Maurice, Violet and Claude over to Quebec in 1913 (oh yes I can – please see the Late-Breaking Updates section below), but we know that they got there so it doesn't hugely matter.

Note, however, how the family moved around, from Quebec to Alberta and then back again. Maurice, though, surely one of the longest-lived, eventually (as we know) became tired of 15' of snow on his drive every winter and moved far west to Victoria BC and came into the Waddell family focus.

The following copies have just (Nov 2014) been made available to me by my Aunt Jane's executor, and more or less complete the picture we have of him – apart of course from any previous marriage(s)! 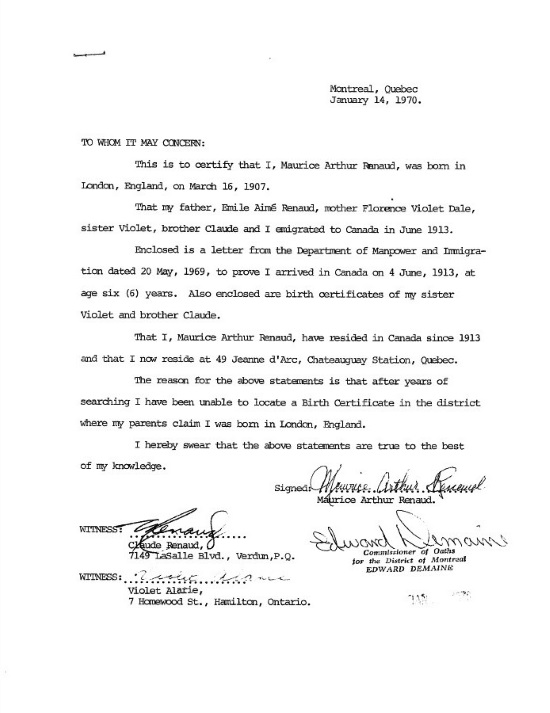 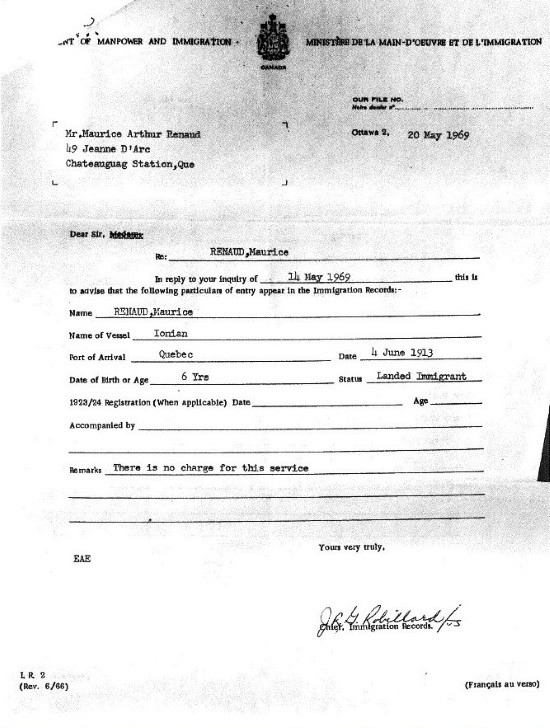 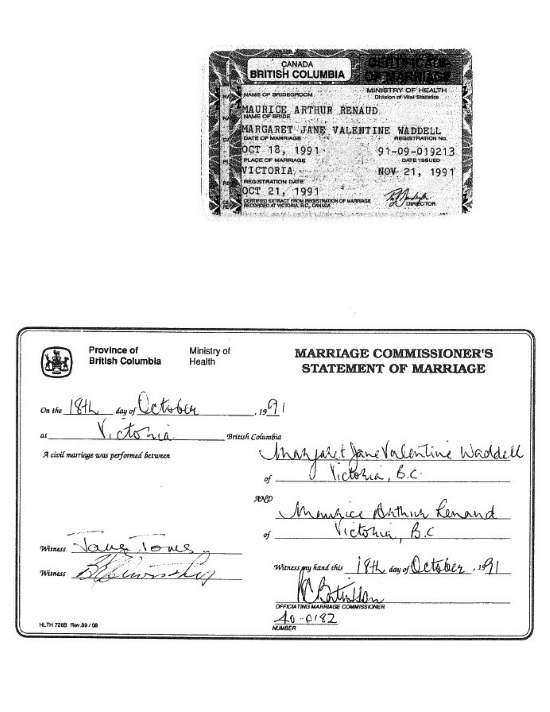