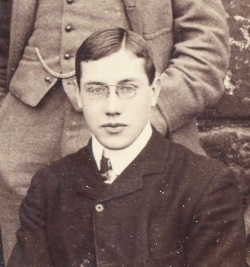 It's a little bit odd that my Uncle Alexander (Sandy) Waddell did not include a biography of his Uncle Peter in the document WADDELL LINE WHO'S WHO. But maybe there were family sensitivities to be respected. It's a pity, really, because Peter's life was evidently one of high academic and professional achievement – excellent grist to the narrator's mill.

I have a very hazy early memory of being introduced to him, a genial and kindly figure, who rather took to my own infant bonhomie (as my mother recounted many years later). But there is virtually no other family tradition concerning his personal qualities, and only two solid facts – that he attended Balliol and that he went on to a very successful career in the ICS (Indian Civil Service). I have had to work both forwards and backwards from these by means of good old Google.

Actually, I have exaggerated slightly, as there is a certain amount of useful information to be found in Sandy's biography (qv) of his father Robert. Peter was born in Singapore, and the family repatriated to Glasgow in early 1892 when he was about 10 (Sandy's arithmetic seems slightly askew). He was then successively educated at Allan Glen's school, Kelvinside Academy and the University of Glasgow (not Edinburgh as stated by Sandy). He had a bent for the Classics (ie Latin and Greek) – continuing the tradition of his Uncle, William Wardlaw Waddell. Presumably these were the focus of his studies at the University, where the story now enters the public arena ...

Note that there is now a nice new profile of him on the University website: 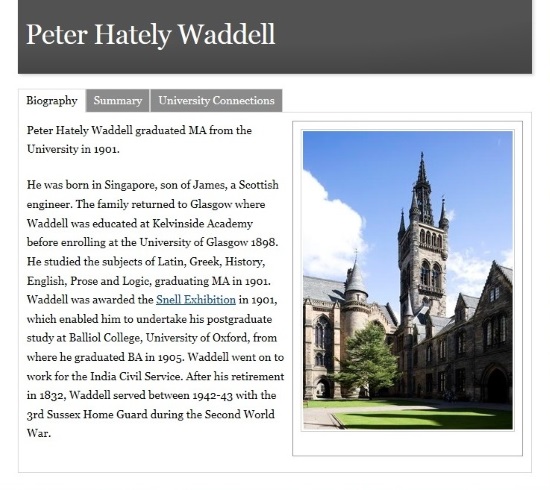 In that year, he was also awarded the annual Snell Exhibition, a highly prestigious scholarship awarded each year to just one student of the University of Glasgow to allow them to undertake postgraduate study at Balliol College, University of Oxford.

of which this is an extract relating to Great Uncle Peter, whilst he was still serving in the ICS (Indian Civil Service):

However, there is another link that connects to a photographic archive of the volumes themselves:

Click here to view an image of his contextual pages in this version of the Register (very much more up-to-date, taking us through to his retirement and wartime service in the Home Guard).

And this is a cutting of his actual entry in that volume:

I was baffled initially (ho ho) by the various abbreviations W.H.F. and so on, but eventually realised that they might signify the various Balliol tutors under whom he studied. And so it proved – by following up links such as

The last-named of these was the Regius Professor of Modern History at that time, and it is noteworthy that in 1903 Gt Uncle Peter achieved a First Class in Mods (the second-year exams for people on the Classics side). So did he then switch to Modern History?

Torpids are apparently a fairly light-hearted annual University inter-collegiate rowing event, or series of events, in which he evidently took significant part. The Arnold [& Brackenbury] Society, of which he became President, also seems to have been light-hearted, specialising in rather less serious debates than in the Union itself.

What with rowing, tennis and polo he appears to have been the first member of the Waddell line ever to have shown an active interest in sport, which would have stood him in very good stead on taking up his career in India. He seems to have escaped the malarial recurrences which so badly undermined his younger brother Robert's health over a lifetime, unless of course his early retirement in 1932, at the age of only 51, indicates some health problem had finally caught up with him. But this is all pure speculation on my part, and so there I must bid him adieu.

Except to say that, according to his grandson David, he spent his retirement reading Westerns (Zane Grey being his favourite author) and day-dreaming of becoming an apple farmer in New Zealand. Strangely incongruous that a highbrow classical scholar and ICS grandee should develop a taste for Wild West paperbacks. But, oddly, after reading Erewhon (set in a fictionalised New Zealand) as a teenager I had a similar urge to seek my fortune there, but it never came to anything – the Lord of The Rings films brought it back again, but I'm too creaky now in any case.