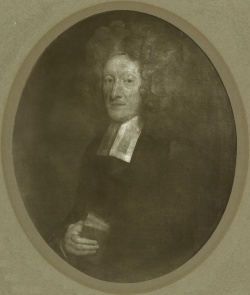 [Thomas Boston's] first awareness of the dealings of God with his soul took place when he was eleven. His father took him to hear Rev Henry Erskine preach. Erskine, the father of Ralph and Ebenezer Erskine, was a puritan: he'd been ejected from his charge twenty five years earlier by the Acts of Uniformity.

There are one or two interesting things that should be said about Henry Erskine. First of all, Henry Erskine was one of thirty three children. The next thing is that his wife was buried before Ralph and Ebenezer were born. Mrs Erskine had been buried in the local churchyard, and because her husband was so distraught, the family heirloom of a gold ring wasn't removed from her finger, which was still heavily swollen. So she was laid in her coffin still wearing the ring; and the church sexton, knowing that the valuable item was there in the graveyard, resolved that he would steal it before the grave was finally closed. Armed with a strong knife, he opened the grave and he began to cut off the ring finger; and you can imagine his astonishment when blood spurted from the wound, and Mrs Erskine sat up in her coffin. The man fled in terror, and the good lady literally rose from the grave. She made her way to the door of the home, and she stood and knocked for admittance. Her husband, conversing with friends who were trying to comfort him, when he heard the knock at the door, said "Were it not that I had just put my wife in her grave, I would say that that was her knock." He rose and went to the door, and there stood his wife wrapped in her grave clothes, with her uplifted finger dripping with blood. "My Margaret!" he exclaimed. "The same," said she. "Your dear wife in her own proper person. Don't be alarmed." She lived after that for eight years, and became the mother of several children, among whom were Ralph and Ebenezer Erskine.

It was said of Henry Erskine, "Above Henry Erskine's head, let the weather be foul or fair to his neighbours, the sky was always blue. In his heart, every month of the twelve, the birds sang, the flowers bloomed, and the river of the water of life made happy music."