The Rev José Gueritz's life was punctuated by the relentless loss of his close family – his elder brother Mamerto George Gueritz and his younger sister Antonia Anne Gueritz both died, unmarried, in 1884; his younger brothers Edmund Peregrine Gueritz and Henry Francis Gueritz predeceased him in 1938 and 1929 respectively, and only his sister Mary Louisa Gueritz, progenitrix of the Mortimer branch of the family, outlived him.

Worse still, his second son Charles Mamerto Gueritz died from diphtheria at the age of 5, and there were to be no more children. And his firstborn son Elton Lawrence Gueritz, broken in health, retired early from colonial service in West Africa and died prematurely in Cheltenham at the age of just 46.

His father Mamerto, as we know, had received a rather fragmented elementary education, but had then taken a degree at the University of Oxford. But what do we know of the education received by his sons (his daughters of course, being inescapably female, would inevitably have contracted 'brain fever' if subjected to anything tougher than the three R's and a slight proficiency at the piano)?

As outlined in Mamerto Gueritz's obituary, José's elder brother Mamerto George Gueritz, evidently possessed of a fine boyish treble, became a chorister at All Saints' Church, Margaret Street, on the fringes of 'Fitzrovia', just north of Oxford Street and Soho, and west of Bloomsbury. Fitzrovia is a soubriquet (nowadays adopted officially) for the bohemian enclave of central London surrounding Fitzroy Square, named for Charles FitzRoy 2nd Duke of Grafton. The church itself is perfectly hideous, both without and within, but that goes with its High Anglican origins. Its vicar at the time (1859 to 1873) was William Upton Richards (2 Mar 1811 - 16 Jun 1873). 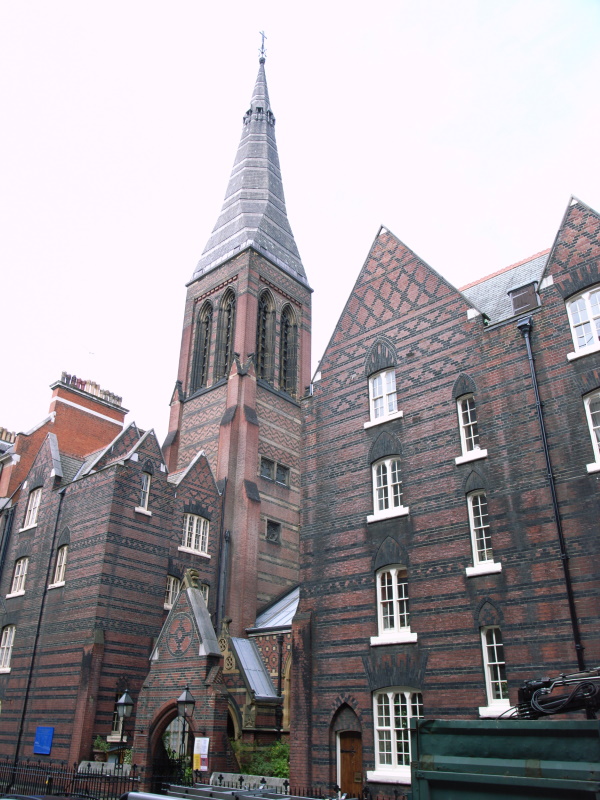 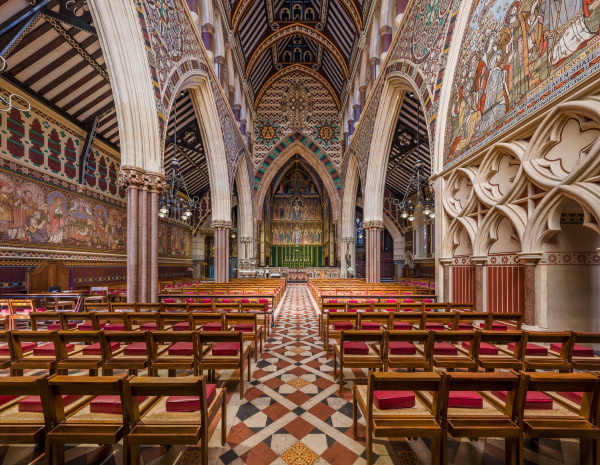 More importantly, it also provided a choir school for the education of the junior choristers, which Mamerto George would have benefited from.

As also mentioned in that same source, Mamerto George, presumably when his voice started to break, proceeded to the College of St Michael and All Angels for his secondary education. This may well have been a strain on the paternal purse!

We do know (courtesy of the Wellington NZ Evening Post of 6 Oct 1938) that José's younger brother Edmund Peregrine Gueritz attended St Andrew's School in Stoke Newington, a suburb of north London – but do we? I can find no internet record of that school, and given that his father Mamerto sometimes retreated to St Matthias, Stoke Newington, and that St Matthias was much admired for its choral singing, it's quite possible that St Andrews is a case of mistaken identity.

But we have to assume by default that José and his youngest brother Henry Francis Gueritz, were either home-tutored (possibly by their aunt Adelina Valentina Gueritz), or attended the local Colyton Feoffee Grammar School.

The Alumni Oxoniensis records only José's son Elton Lawrence Gueritz as a graduate, and the Alumni Cantabrigensis has its post 1751 knickers in a total twist, despite 250 years or so to untwist them. There was also University College London to consider, but it was probably too free-thinking and Anglican-alternative for Mamerto's taste. We see below that Jose became a deacon at the age of 25, but presumably he'd been doing something useful since leaving school at the age of about 17 – possibly teaching in the Colyton Grammar School.

In fact, the 1871 Census shows both the 18-year-old José and his 16-year-old brother Edward as being employed as commercial clerks by an accountant, and boarding with him over the shop, so to speak, in Trafalgar Street, Hackney (a London borough beloved of crossword setters). Edward is next heard of as joining the Sarawak Service in 1874, and maybe that's when José started to focus on training for a career in the Church instead of commerce.

In comparison with his father Mamerto, José Gueritz was a positive gadabout, and were it not for the following compendium we'd have little clue as to most of his various incumbencies, stretching from 1876 to 1916. 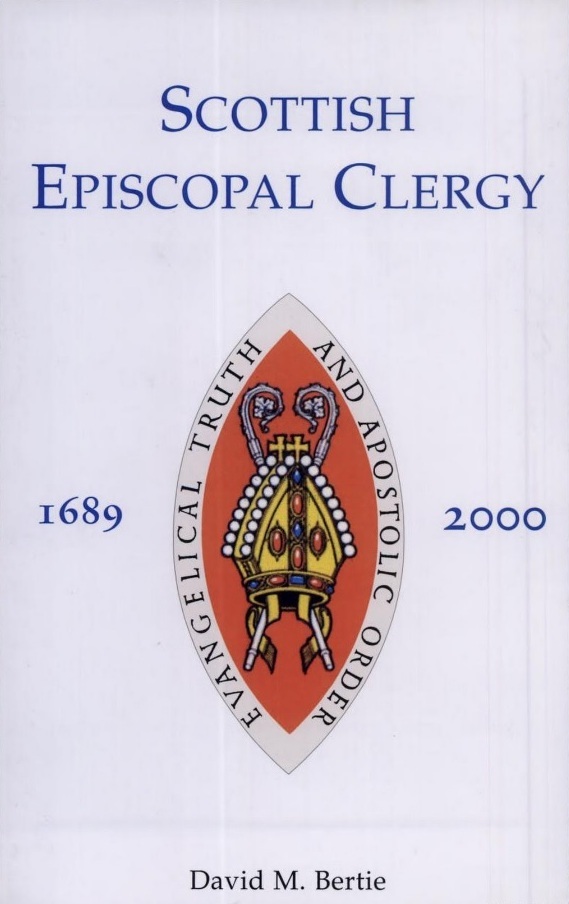 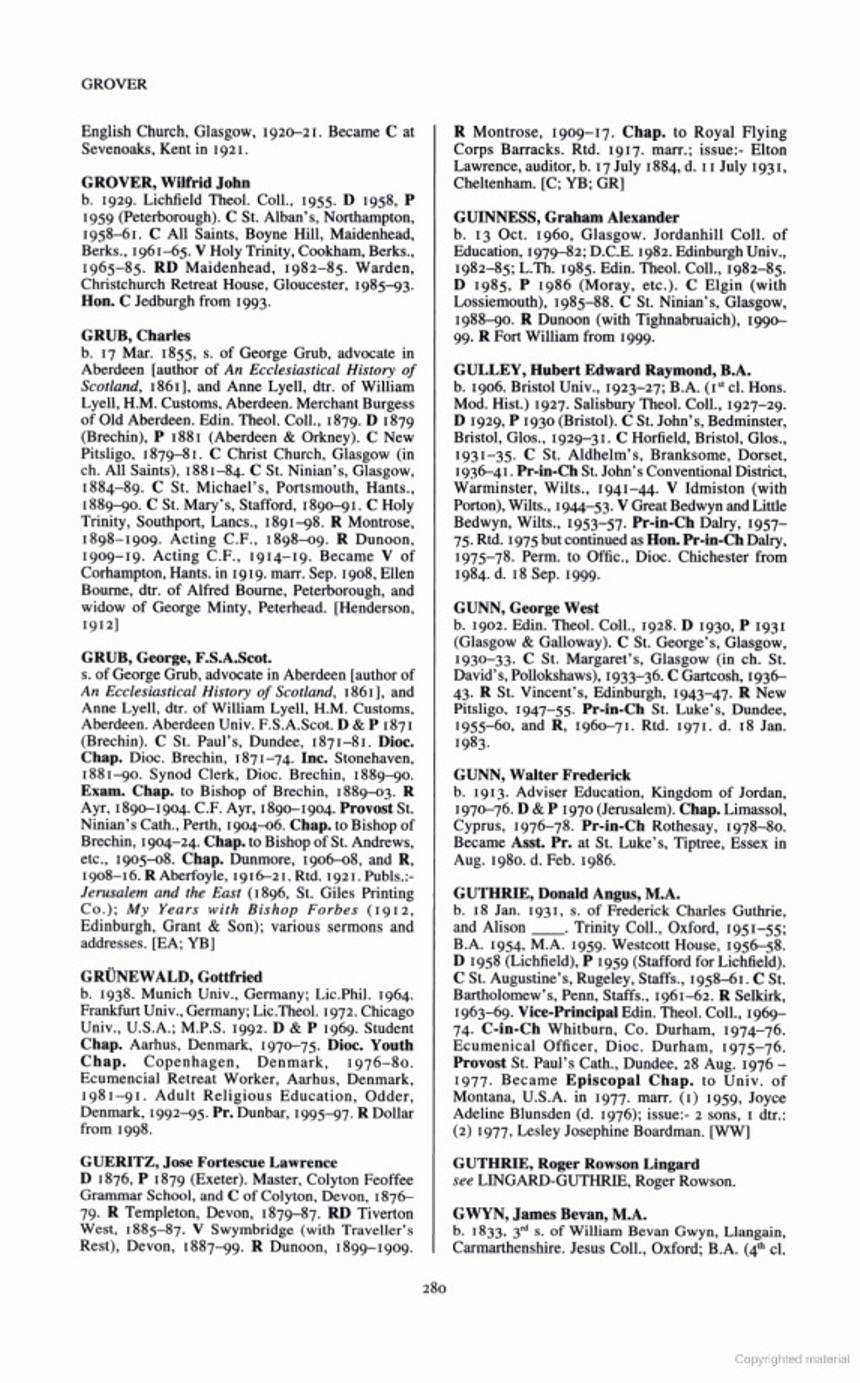 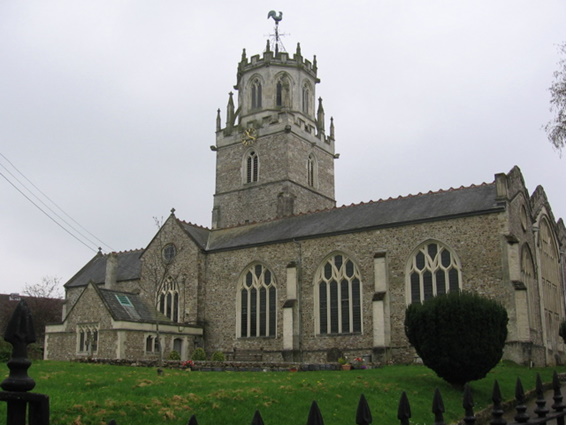 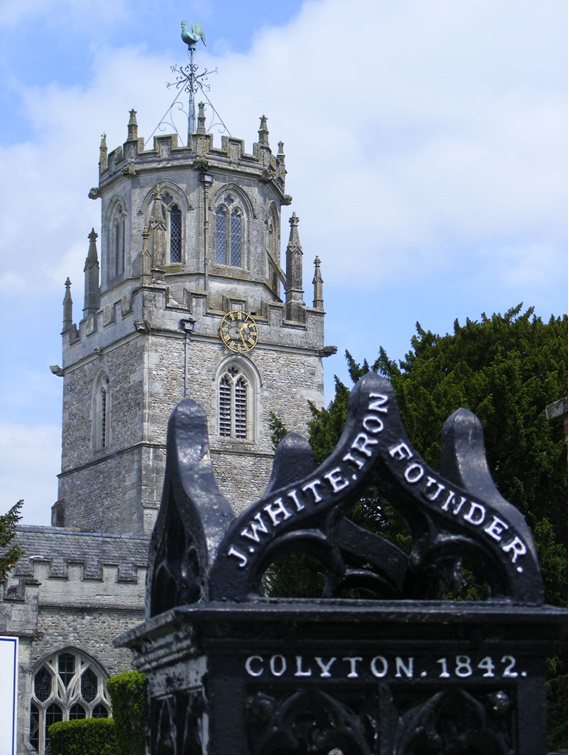 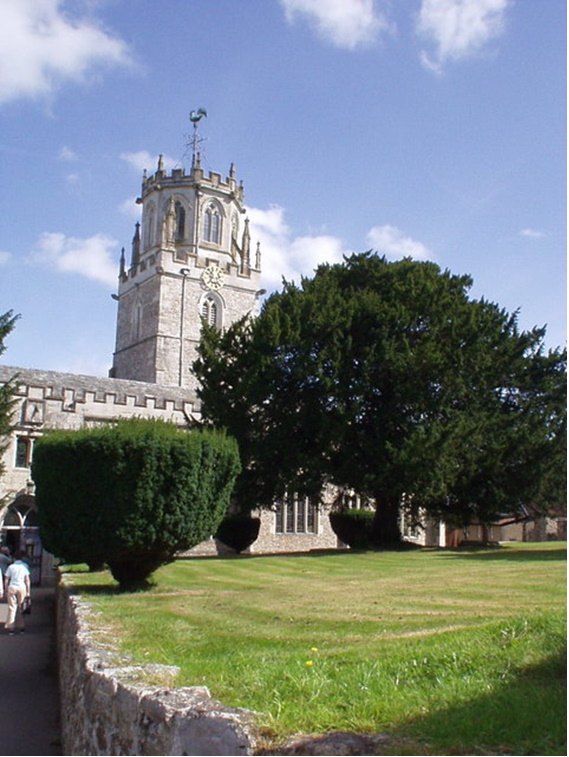 Ordained in Exeter in 1876 (presumably by the Bishop), he became a curate in the parish of which his father Mamerto was the vicar. He also taught at the Colyton Feoffee Grammar School where his excellence at cricket must have come in very handy 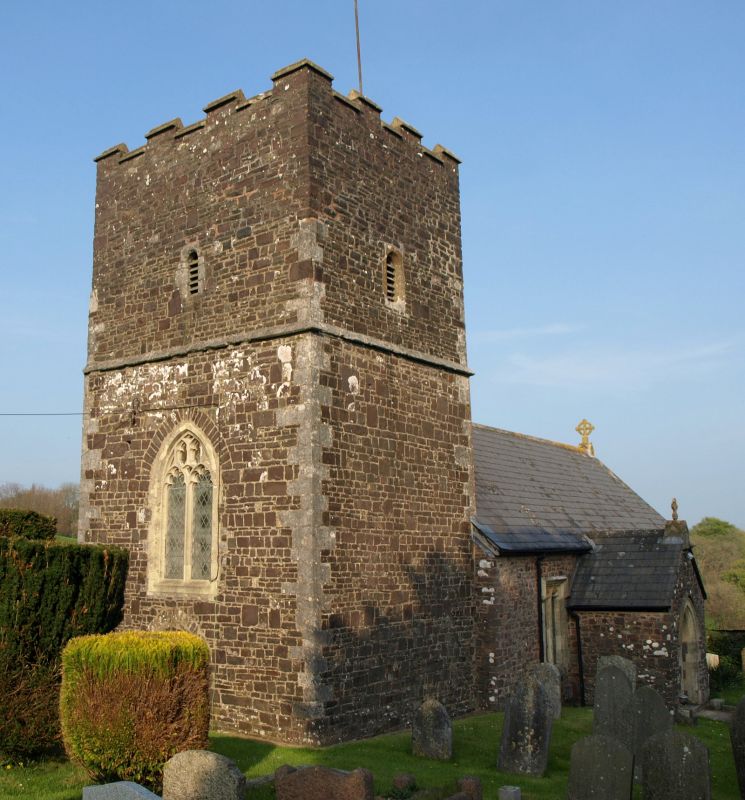 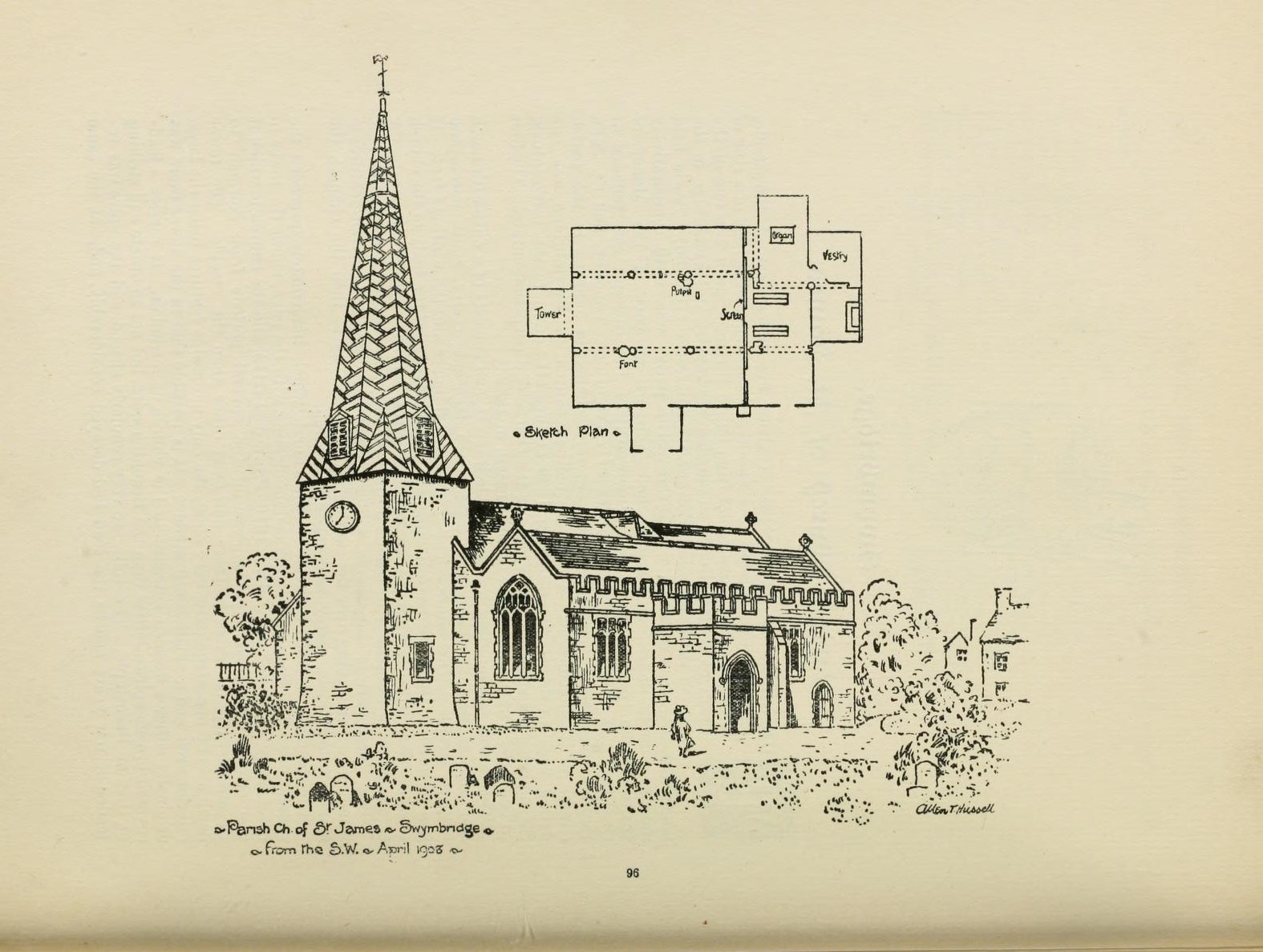 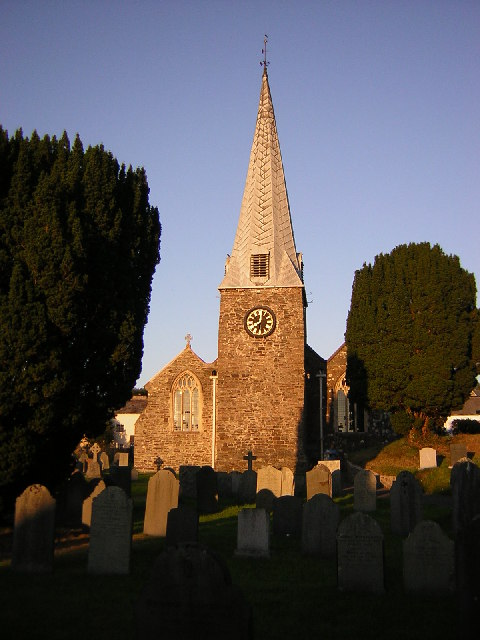 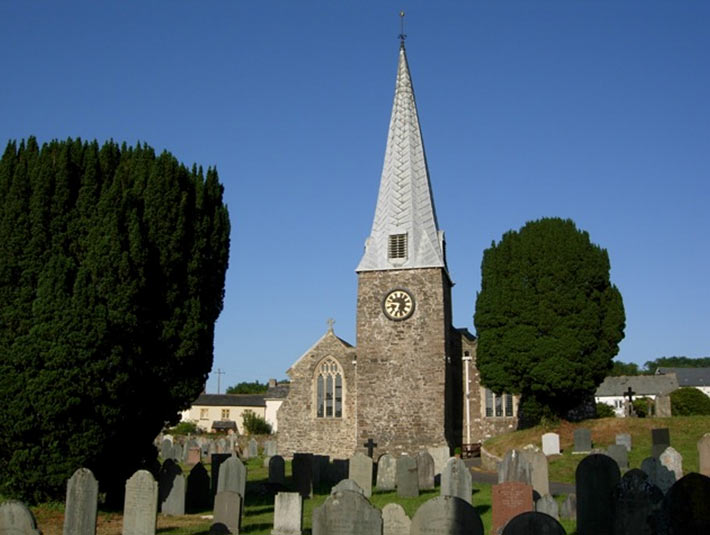 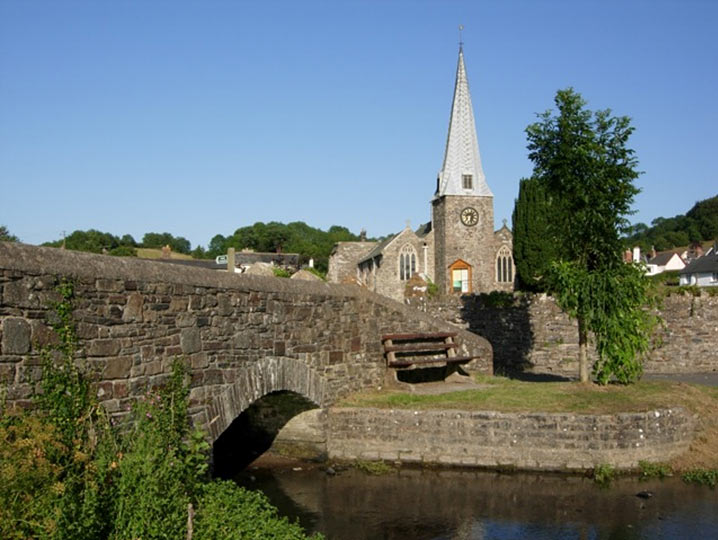 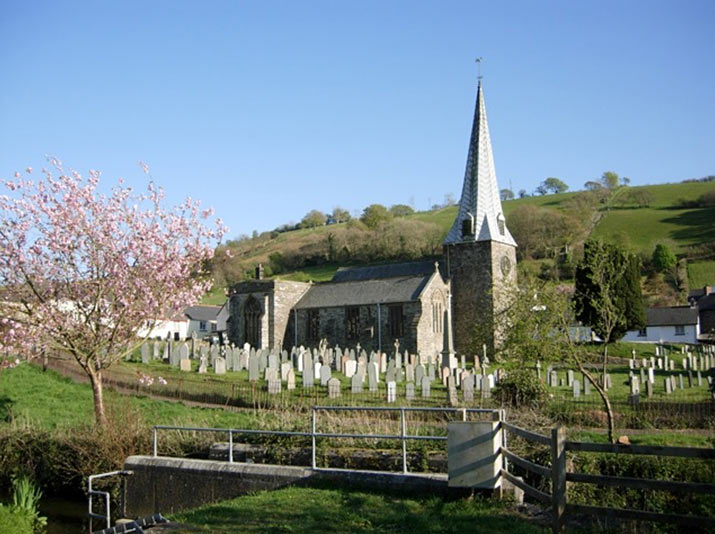 His impact on the parish was overshadowed by his almost legendary predecessor John (Jack) Russell. 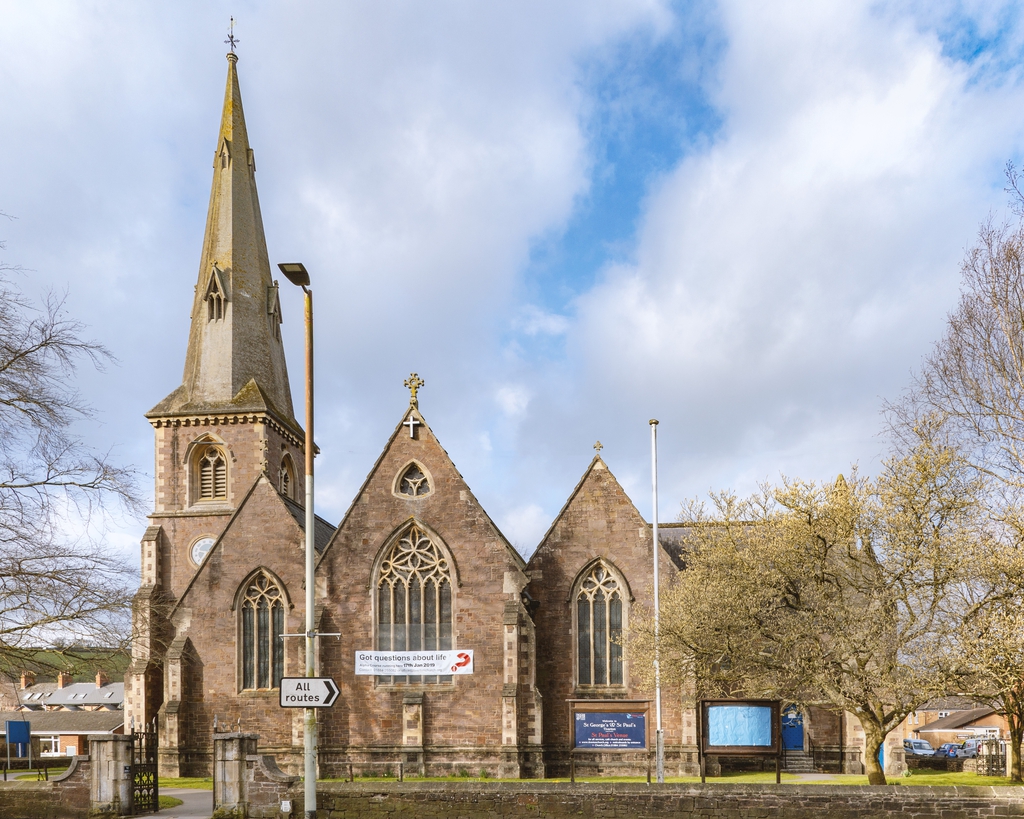 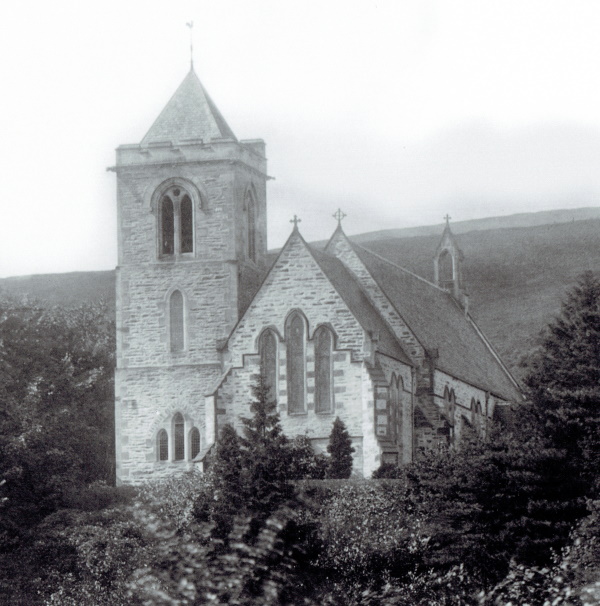 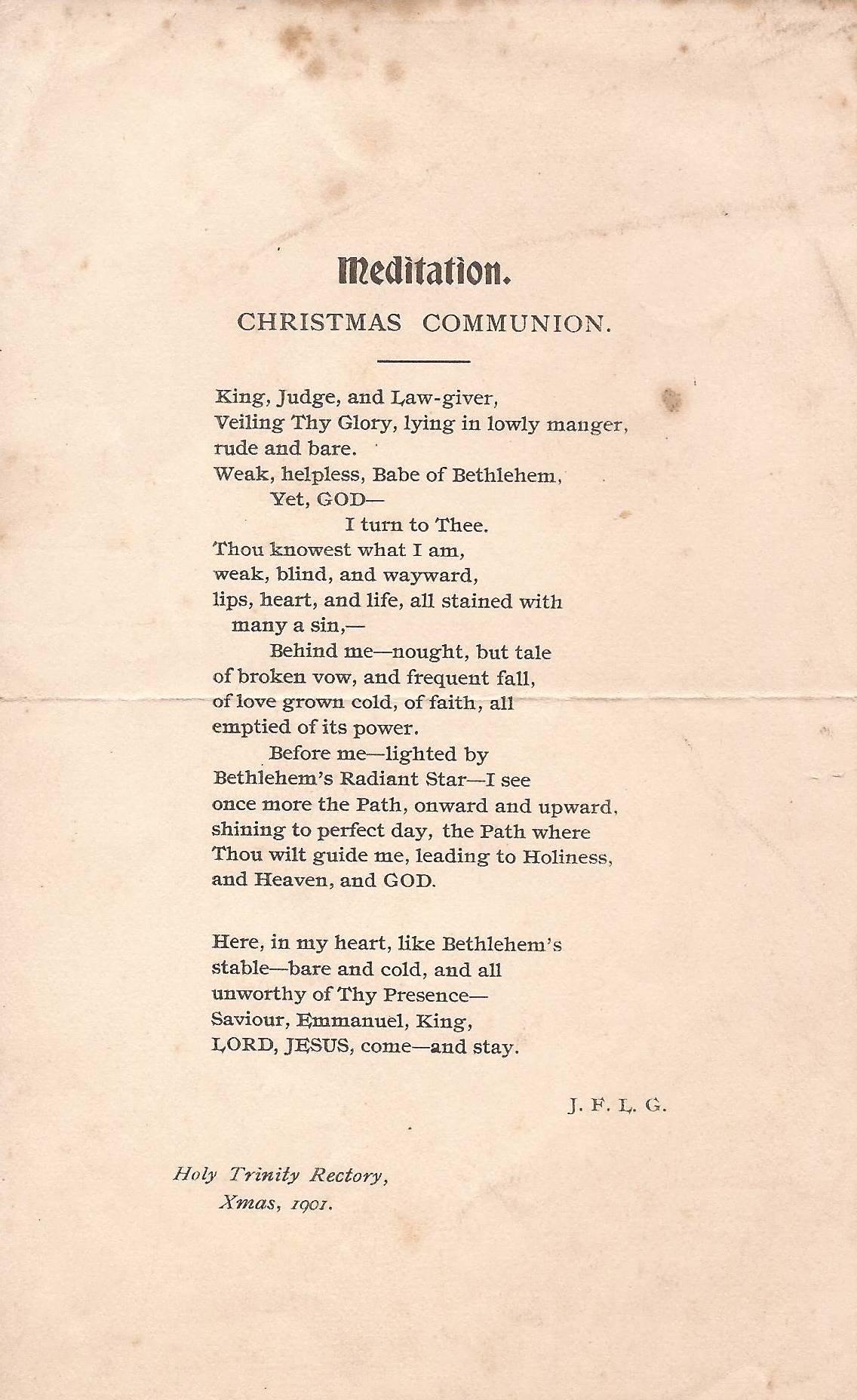 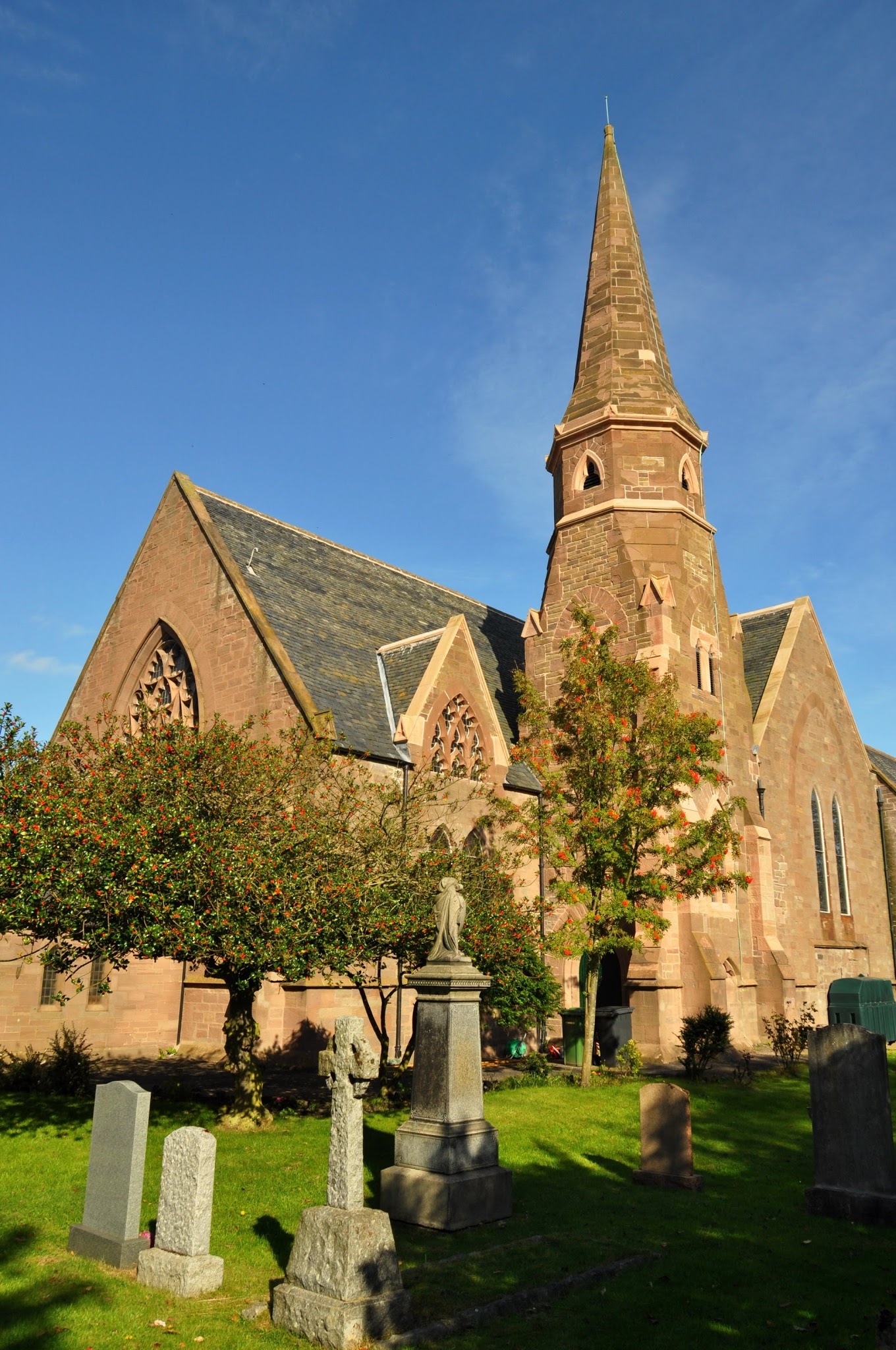 He became renowned for his lectures on popular subjects.

Death of his wife

José's wife Lucy Octavia (née Elton) died at the age of 68 on 13 Sep 1915 from what was described as a 'rather trying' illness and we must consult her birth certificate to discover its precise nature ... which turns out to have been a combination of influenza and ulcerative tonsillitis, though the coup de grace was administered by heart failure. 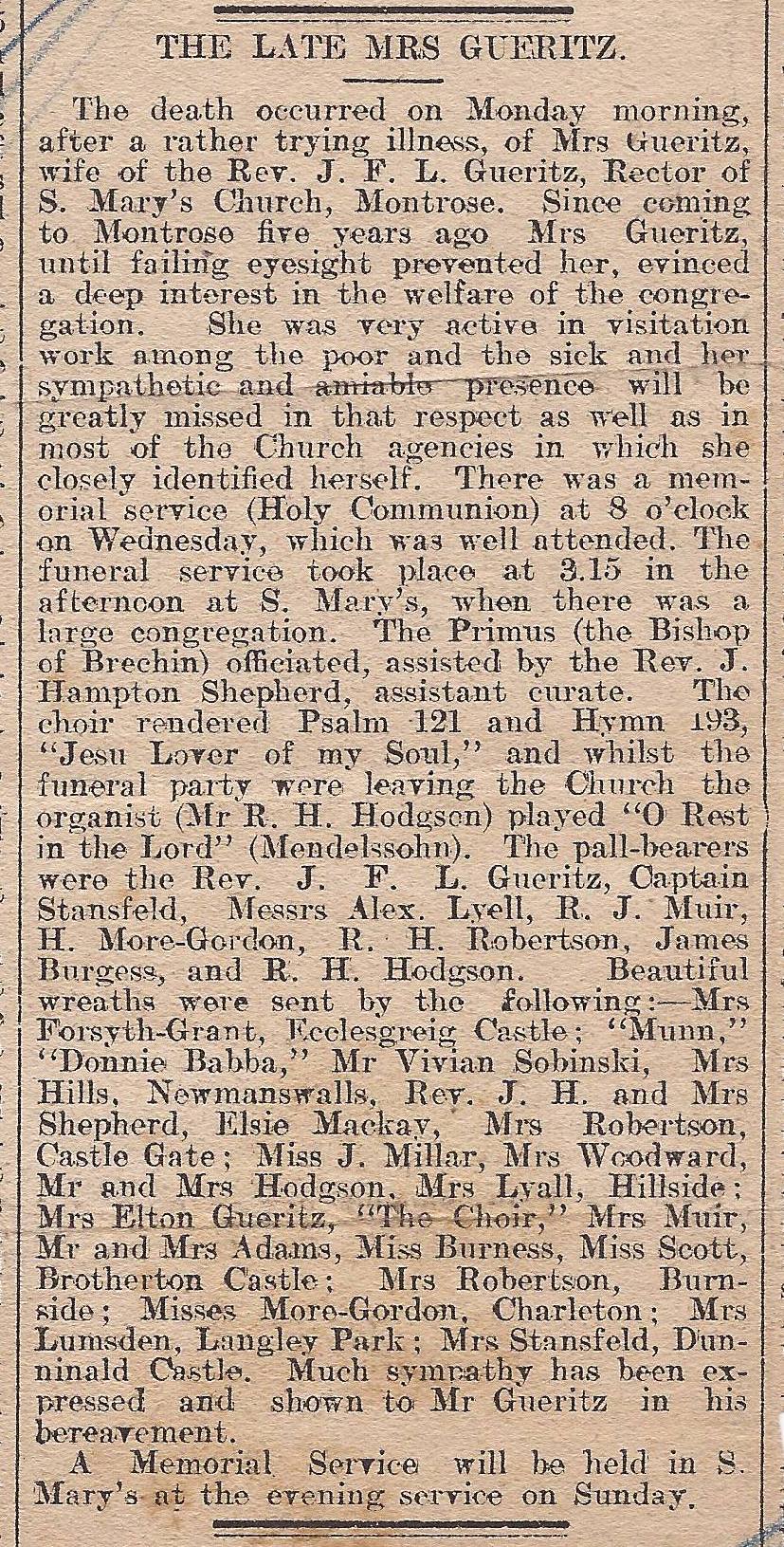 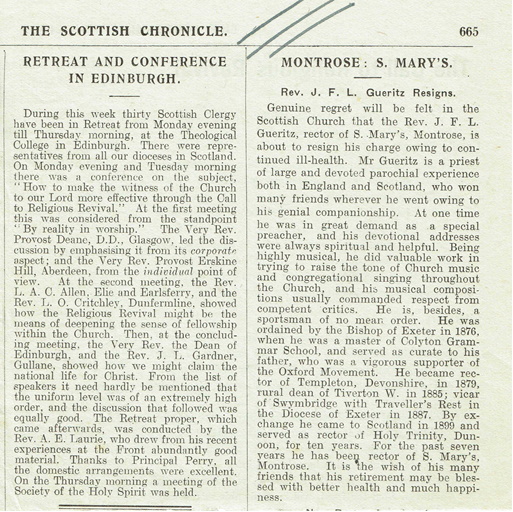 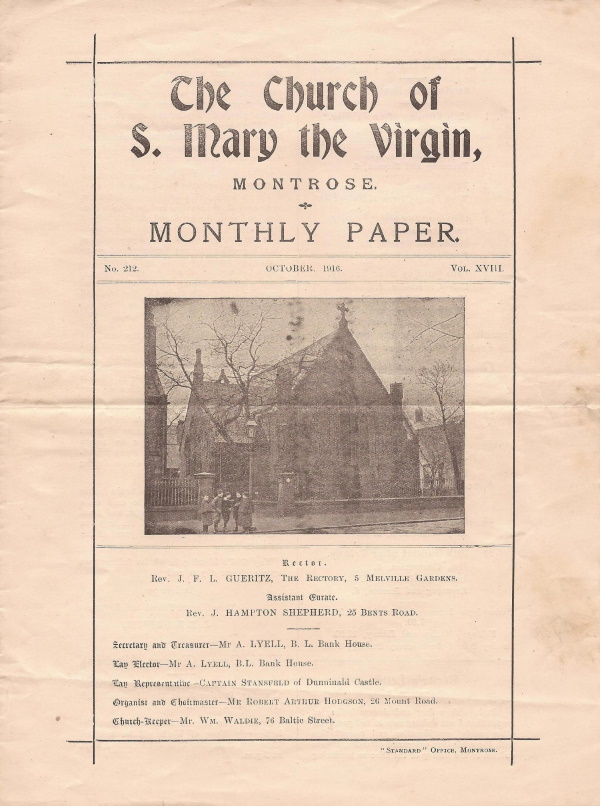 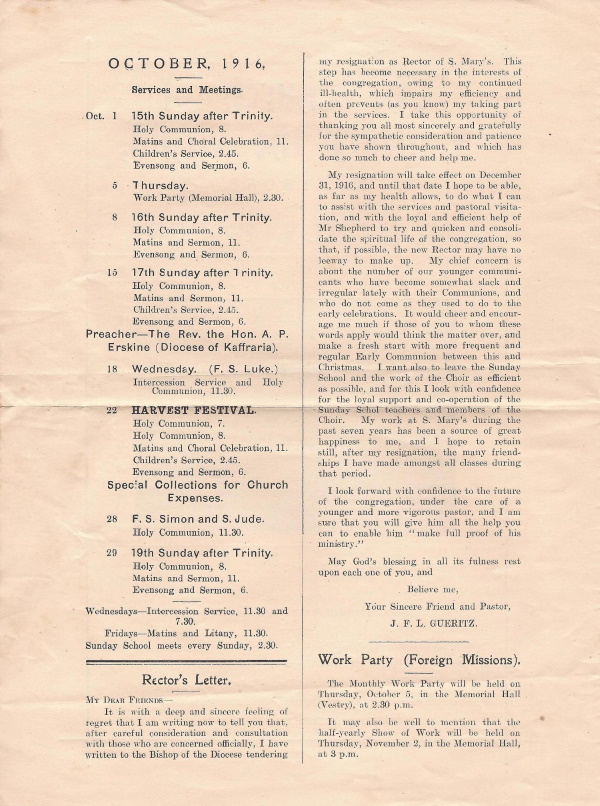 Of all the many family losses he suffered, the worst perhaps, at least in retrospect, was the death of his wife Lucy Octavia Elton in 1915, assigning him to widowhood for over 30 years. I initially imagined that at some point he too would have removed, from Montrose, to Cheltenham where his daughter-in-law Val (née Findlay) Gueritz was chatelaine of the family fortress. This he actually did, but in stages, as one can see from the electoral registers post WW1.

To start with, in fact, from at least 1922 until about 1928, the family lived in the village of Woburn Sands in Bedfordshire, and so José relocated to Apsley Heath / Apsley Guise, close to Woburn Sands, probably in rented accommodation as he moved restlessly to various different addresses there.

From 1929 onwards, when the family had indeed moved to Cheltenham, José relocated too, and once again followed the pattern of moving from one address to the next. Even after his son Elton's death in 1931, however, José retained his residential independence despite ever-increasing frailty.