Did Victorians Really Get Brain Fever?

The melodramatic descriptions of "fevers" in old novels reveal just how frightening the time before modern medicine must have been. 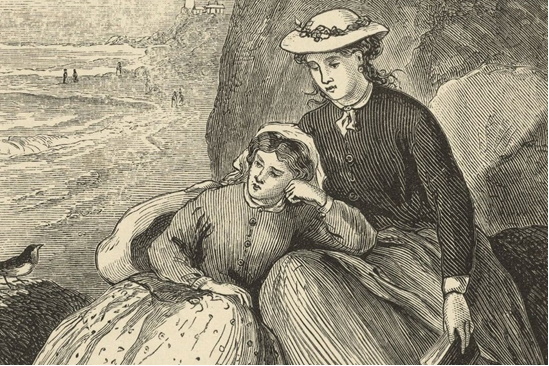 Jo and Beth from an 1869 edition of Little Women

What the heck is brain fever? If you've ever picked up a nineteenth-century novel, you've probably asked yourself this question—and given the frequency with which brain fevers afflicted fictitious, Victorian-era characters, you may have suspected it was a kind of faux public health crisis invented by novelists in need of a handy plot device.

Famous fictitious victims of brain fever include Madame Bovary's Emma Bovary, who suffers from brain fever after reading a brutal breakup letter from her lover Rodolphe, and Great Expectations' Pip, who becomes direly ill after his father figure, Magwitch, dies. These characters were fictitious, and often contracted their fever after experiencing intense emotions, but medical literature of the day shows that such symptoms were recognized as a distinct and very real illness by doctors.

Audrey C. Peterson explores the condition, what it meant for Victorians, and how to read it today.

First of all, "fever" didn't necessarily mean a high temperature to Victorians. Rather, people of the era saw it as a suite of symptoms seated in the brain. "Brain fever" came to mean an inflamed brain—one characterized by headache, flushed skin, delirium, and sensitivity to light and sound. "Many of the symptoms and the post-mortem evidence were consistent with some forms of meningitis or encephalitis," writes Peterson. However, it's unclear if all "brain fevers" had their roots in contagion. Rather, "both physicians and laymen believed that emotional shock or excessive intellectual activity could produce a severe and prolonged fever."

Just because descriptions of illness may seem old-fashioned and inexact today doesn't mean they were entirely made up.

Overexerted women were thought to be particularly susceptible to brain fever, which was treated by wrapping patients in wet sheets and putting them into hot and cold baths. Women's hair was often cut off during their illnesses both to lower the patient's temperature and prevent pesky maintenance issues. This gave female fever victims an unmistakeable appearance in an era that prized long locks. Fevers were used by authors as literary devices that allowed characters to mature or realize their true feelings.

Then there was that other nineteenth-century fever—scarlet fever. It afflicted everyone from Little Women's Beth March to the real-life Mary Ingalls' fictitious counterpart in the Little House on the Prairie books. But this term, too, may have been used to refer to meningitis or encephalitis. Pediatric historian Beth A. Tarini believes that the term was inaccurately used to describe viral meningoencephalitis in Mary Ingalls, whose disease rendered her completely blind.

The prevalence of these fevers in old novels illustrates how scary sickness could be. Nineteenth-century doctors didn't have access to antibiotics or even understand how contagion worked. And as Peterson explains, just because descriptions of illness may seem old-fashioned and inexact today doesn't mean they were entirely made up. "The novelists who used brain fever were following medical descriptions, not inventing them," she writes—and expressing the terrors of a time before modern medicine.