Some weeks ago now (Sep 2019), I was contacted by Ms Robin Murphy of Palm Beach Florida, to say that she had in the early 1990's been closely acquainted with Lady Laura Findlay, the second wife, and by then widow, of Sir Edmund Findlay, the last family proprietor of The Scotsman.

This came as an exciting surprise, as Uncle Sandy hadn't suspected her existence and so neither had I. Although I don't know (yet) all her background details, it transpired that from very modest beginnings (her father was an able-bodied seaman in the Merchant Navy) and an unsuccessful first marriage, she had remarried into the Scotocracy and with it a life of wealth, glamour and first-class travel. Somehow or another, her horizons had eventually narrowed slightly and she had taken up permanent residence in Palm Beach, next door to Robin Murphy and family.

Despite the considerable difference in their ages, Robin (in her teens) and Laura (by then in her eighties) got on famously, and became great friends. Robin hugely enjoyed Laura's reminiscences of life in the Jet Set, and Laura obviously found Robin to be a breath of youthful freshness and zest. Sadly, Robin eventually moved away with her family, and the connection was lost in the mid 1990's. 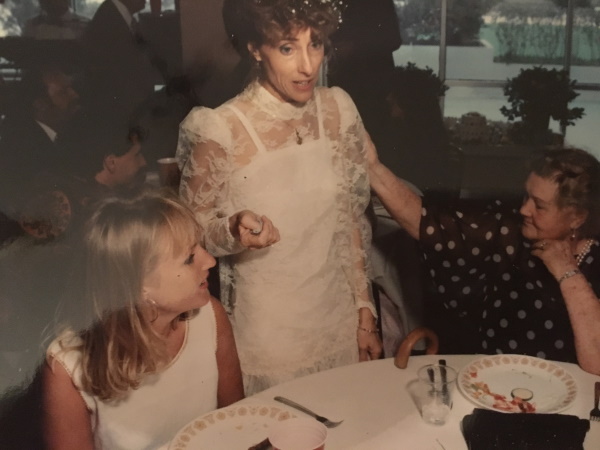 Robin (LHS), the bride (centre) and Laura at a wedding reception 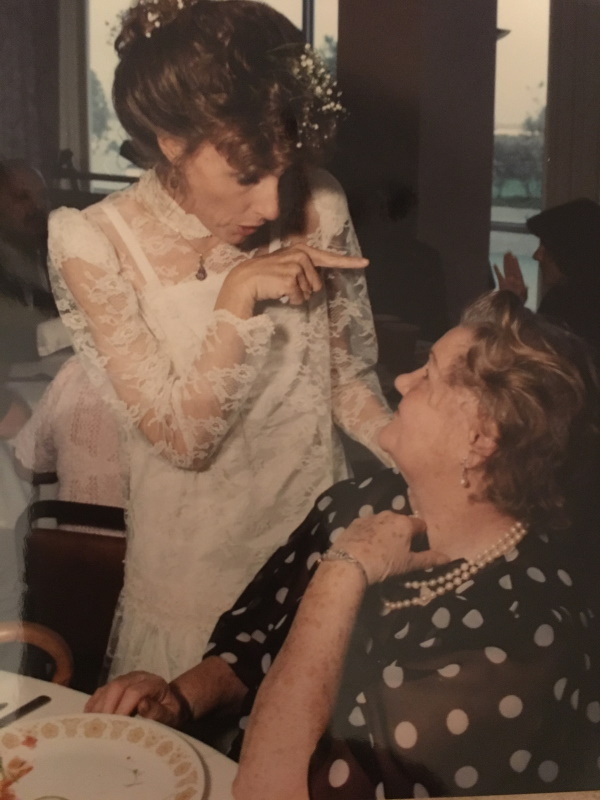 In the years that followed, Edmund Findlay and his new wife Laura lived a high-profile life of air-travel (not immediately jet-set, as the de Havilland Comet was still in prospect) between Scotland and the very much warmer climates of the Canaries and South Africa.

And the home address in Scotland that Edmund always gave was Balcary Tower, Auchencairn, near Castle Douglas, Kircudbrightshire, Scotland.

Where was this, and indeed what was it?

In fact, it was a sort of secret hideaway, built some ninety years previously as a secret rendezvous for hanky panky, ooh la la to be precise, with a beautiful vista of the Solway Firth on the south west Scottish coast, an area that was also a favourite haunt of Charles Farquharson Findlay, Edmund's third cousin twice removed. 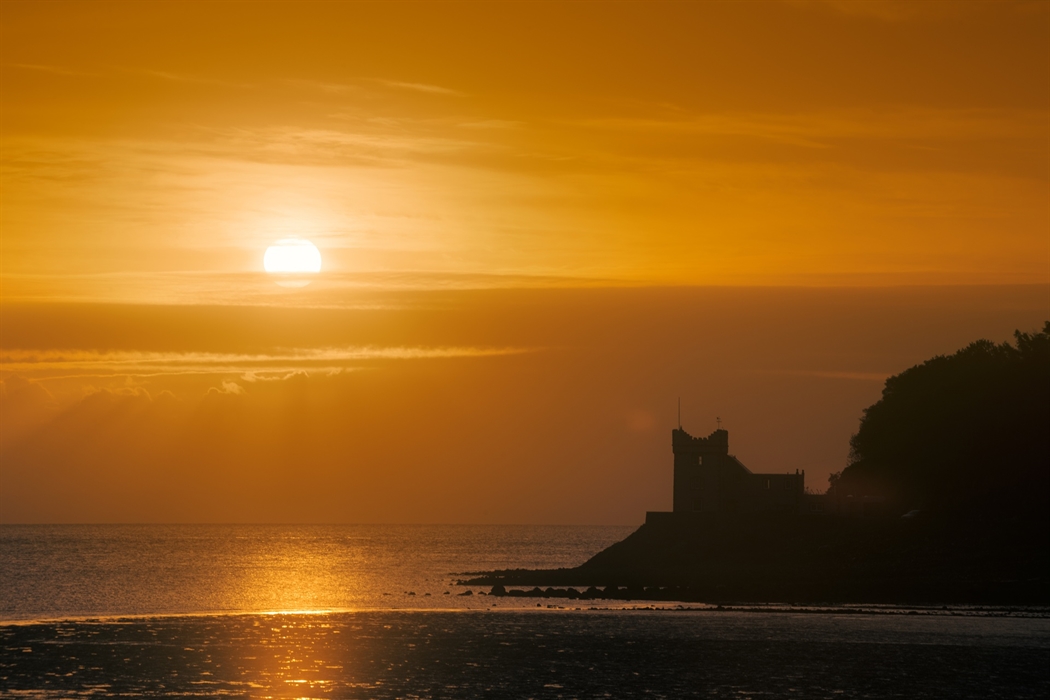 Balcary Tower is an historic property in need of some modernisation situated on a stunning promontory overlooking the Solway Firth in Kircudbrightshire. A three-storey castellated tower, the house is extremely private and was built to house the French governess, and mistress, of Colonel Johnstone when he was laird of Auchencairn House, around 1860.

The accommodation extends to over 3,000 sq ft and includes a drawing room with French windows to a terrace and open archway to the dining room. The main sitting room has a picture window with views out to sea-filled swimming pool, and across the bay to Hestan Island. The ground floor also houses one double bedroom. The master bedroom suite with its dressing room and balcony is on the first floor; a further bedroom is also placed at this level, as is one more on the upper floor. Stairs from here lead to a hatch to the roof which supports the flagpole and the weathervane. 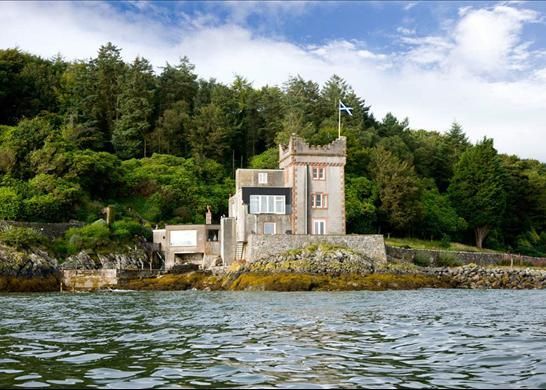 Outside are extensive gardens and a range of outbuildings including a boat house. There is also a slipway and a jetty, and the sea-filled swimming pool. A paddock extends to around 12 acres and salmon netting rights come with the house. The grounds extend to around 19 acres.

There are still some images from that era (though note that Auchencairn was geographically far removed from the Findlay's estate in Aberlour which Edmund had sold-off some time previously). 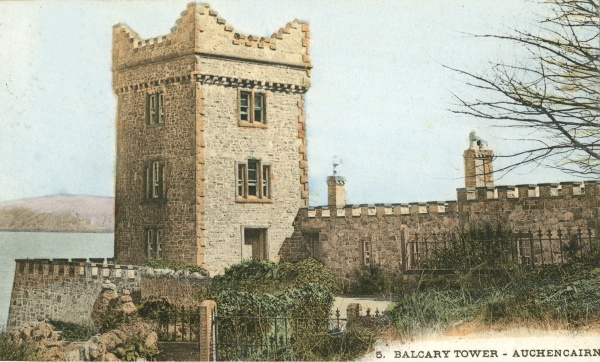 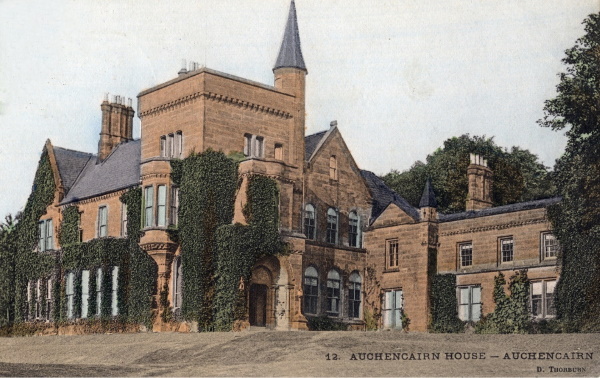 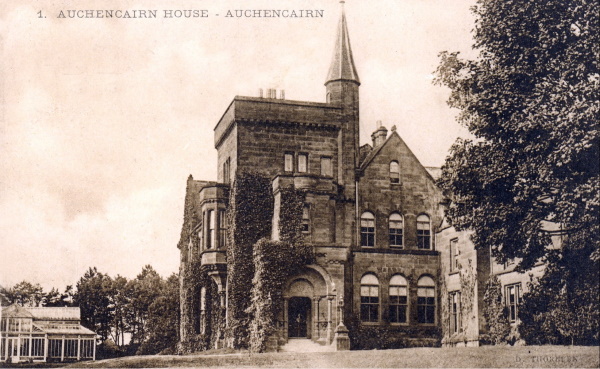 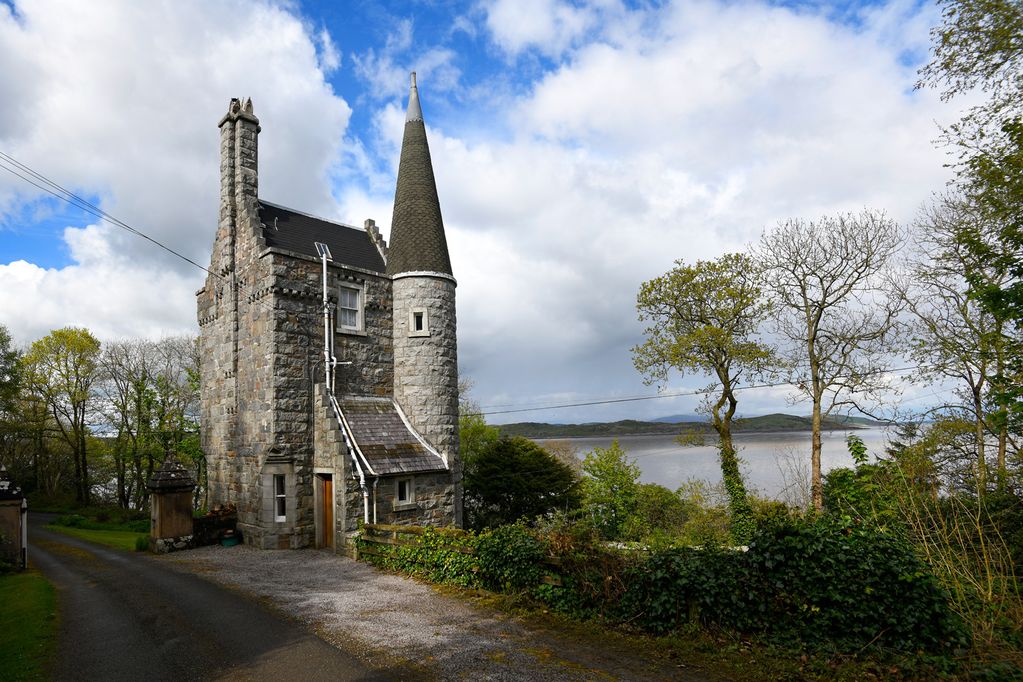 a surviving gate-house of Auchencairn House

All this Scottish Baronial architecture, and Edmund's easy charm was more than enough to turn a girl's head, despite his ferocious alcoholism. The story became more than a little complicated as the years rolled by, Edmund died at the early age of sixty, and Laura's son from her first marriage, Richard, became increasingly obnoxious and domineering. The story unwound itself in a series of fascinating emails from Robin herself.

I ran across your website and was very intrigued. Many many years ago I lived next door to Lady Laura Elsom Findlay, Sir John Edmund Ritchie Findlay's second wife. At the time she was in her 80's. She had moved to the USA from the Canary Islands on the advice of her son Richard Elsom, who lived in Bermuda.

She was a fabulous story teller and it was great to see pictures of Aberlour on your website, as she spoke of it.

I eventually lost contact with her with her as her son was not a nice man. I imagine she passed away in the USA. I could find pictures of her and I have a tea set with something engraved on it about the Backhouses (Edmund's mother). I would have to find it if you would like to see pictures? I enjoyed my days with her ... my favorite saying "you can put a pig in a drawing room but it's a pig just the same". She was fabulous.

I was 19? 20? at the time, her son literally dumped her and her 3 legged dog "Doggy" here in the US, from the Canary Islands. He had a townhouse that he was having issues with and Lady Laura could move in, that was his fix. He dumped her and ran, leaving his 80 year old mother and the 3 legged dog. My mother, sister and myself, lived next door.

I would imagine he, Richard Elsom, has since passed away. He lived in Bermuda with, at the time, his girlfriend Carla? Karla? They both worked in tourism. I believe Richard dressed up in costumes and had something to do with tours for visitors. He was not a nice man. Personally, I think he resented his mom because of Sir Edmund.

Lady Laura spoke of Sir Edmund fondly. Her stories were fabulous, I spent many cups of tea listening to them. I wish now, I would have written them down or recorded her. When I first met her, I thought she was a crazy old lady, going on and on. Then I realized she had photographs to back up her stories!! Photographs of her and Sir Edmund in the pyramids of King Tut. A picture of her [great] niece with Prince Charles. (I can't remember, if her niece was engaged or dated Charles before Camilla, the first time (before Diana)) ... There's so much! Our adventures!

She put liquid dish soap in the dishwasher one day. I went over and found bubbles EVERYWHERE!!!

I remember her saying Edmund was tall. And in the pictures he was VERY TALL and thin! She was 5'3" blonde blue eyes. And he was a drinker, I think she was always on watch. But she was a kind good lady, never spoke a nasty word about anyone ... even Elizabeth Taylor who was sitting next to her at some dinner and had a long hair growing out of a mole.. (she was sooo funny, in her own proper way).

She was a lost puppy when she came. The first time we went to the grocery store, with her gloves on, she handed the worker her shopping list... I stepped in and said "Oh no, that's not how it works. We have to go up and down every aisle putting stuff in our own cart".

Her son didn't actually "work"… it was more of a volunteer position ... (he was a spoiled kid, he never wanted a day in his life). They didn't have the best relationship. I do think he resented Edmund's and her relationship. Richard was sent away to school (a fancy school, I can't think of the name right now) and she and Edmund went about enjoying each other (that's just my opinion) But the few times Richard came to Florida he was very cold and unappreciative of the help/care.

I did look quickly for some pictures. I'll keep looking. I asked my sister. I know [Laura] went to my mom's wedding and she is in those pictures ... and the tea service is in the attic, so I have to dig for it, as well, but I will get to it!!

My mom remarried, and we moved away. But I still checked on her and took her out once a week. One day we were at the bank. She started having difficulties breathing and we called 911. The paramedics came and took her to the hospital. She was in congestive heart failure. It was DAYS before her son arrived. When he did he contact me and it was in regards to his mom's belongings, that she handed me before she went on the ambulance. Not thanking me, but questioning me. I was insulted. Naturally, I brought back her rings that she handed me. I didn't want them. If I wanted them, I would've taken them years ago ... I'm not that type of person. I was the person who took care of his mother and her three-legged dog.
Hello Robin,

I've been doing some extra research on the ancestry website...

That name "Hawley" is so useful. It was Laura's original surname, her parents being Percival (Percy) and Lily Hawley, who lived in Hull, East Yorkshire. According to the 1911 UK census he was an "able-bodied" seaman in the Mercantile Marine (aka Merchant Navy). Laura (no middle name) was born on 5 Aug 1910, and was the youngest of four children (2 boys, 2 girls). In the second quarter of 1931 she married Harold R Elsom (it seems a good bet that the R stood for Richard!), and in the fourth quarter of 1947 she married Edmund Findlay of course.

They seem to have travelled a great deal (by ocean liner or jet) to sunny places such as Spain, the Canary Islands and South Africa, maybe to visit places that her father had told her about when she was growing up. The passenger lists of these liners reveal that their home address was Balcary Tower, Auchencairn, near Castle Douglas, Kirkcudbrightshire (pronounced Kur-coo-bri-sher, I believe) in south-west Scotland, a lovely area on the Solway Firth according to pictures on the internet!

She died in Palm Beach Florida on 13 Jun 1997, after a long long widowhood, as you know - thank goodness you befriended her and enabled her to relive her happy times and reminisce so entertainingly. Best regards,