Mad, bad and obsessed by sex... but I never stopped loving my jealous genius of a husband: Film director Ken Russell's third wife on their VERY volatile relationship

By Kathryn Knight for MailOnline
7 December 2011

Some years ago, actress Hetty Baynes bumped into Hugh Grant at a party. The two had first met while recording a radio play together in the early Nineties when Hetty was married to film director Ken Russell.

By the time of their second encounter, however, the couple had divorced. 'Hugh came over and said he was very sorry to hear things hadn't worked out. Then he looked at me quizzically and said: "Too mad?"'

Hetty admits: 'I'm afraid I had to say that, yes, he was.' That is one way of summing up the couple's five-year union – although there are plenty of other adjectives with which to describe Ken Russell's qualities as a husband and his marriage to Hetty: difficult and volatile certainly, but also passionate and loving. 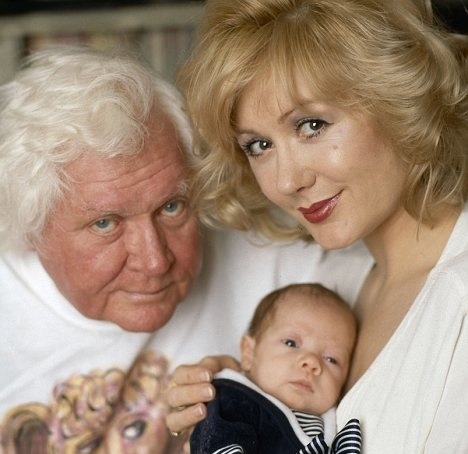 Hetty Baynes with her former husband, Ken Russell,
and their son Rex who is now 18

Even now, 15 years after their divorce, Hetty admits she continues to feel an abiding and profound affection for her eccentric former husband by whom she had a son, Rex, now 18.

She has spent the past 11 days in mourning after learning of Ken's death at the age of 84.

'We couldn't live together, but it didn't mean I stopped loving him, although I knew our relationship would never be rekindled romantically,' she tells me.

'I was glad he had found happiness with his fourth wife, Lisi, and like anyone who cared for him, I dreaded the phone call which would deliver news of his passing. When I last saw Ken a month ago, he was very frail but the news of his death was still a huge shock.'

Shock, of course, is a word Ken Russell became synonymous with over the years due to his controversial style of film-making.

Feted by some as a visionary, but dismissed by others as self-indulgent and sex-obsessed, his passion for dramatic, boundary-pushing screen erotica certainly made him hard to ignore. One of his films, The Devils, has never been shown in its entirety in the U.S. because the sexual content is still considered too graphic.

Little surprise then that his personal life was as colourful as his film output: by the time he died he had married four times, driven three of his spouses half round the bend and fathered eight children.

Hetty, most recently seen on screen in the BBC drama The Hours, was the third Mrs Russell and it is safe to say their marriage was probably the most tempestuous of all.

Still strikingly attractive at 54, it is not hard to see what Russell saw in her. They met in 1992 when Hetty – fresh from success on the West End stage – was called to audition for a made-for-television film directed by Russell called The Secret Life Of Arnold Bax.

At 64, Russell was 30 years her senior, twice divorced and already a father of seven – the eldest of whom was only two years younger than Hetty.

'You always think that with you it will be different, don't you?' she says by way of explanation.

She auditioned in his London flat and was given the role. 'Nothing happened during filming, we were terribly professional but we just clicked,' she recalls. 'He swept me off my feet really, despite the age gap. He was incredibly attractive, funny and charismatic; I'm putty for a slightly mad genius.'

Their first date took place on Valentine's Day at a luxury hotel in Hampshire where, exactly six months later, they were married. By then, Hetty was three months pregnant with Rex. The ceremony was performed by a spiritualist, and Hetty danced down the aisle towards her groom as a string quartet played I Love You Porgy from the musical Porgy And Bess. The thought of that day still makes her misty-eyed.

The honeymoon, though, was a different story. 'Ken didn't like flying, so we went to Bakewell, Derbyshire,' she recalls. 'It poured with rain and I spent most of the time wearing a cagoule bought for me by Ken.'

'It wasn't quite what I'd had in mind, but on top of that we were followed everywhere by an aspiring writer who had tracked Ken down and asked if he could work with him for a few hours each day to help him with a script. Ken said yes, would you believe? I tried to make the best of it, but it wasn't ideal.'

This rather unorthodox start to the marriage was typical of Ken's approach to relationships, and would set the tone for what was to come. As Hetty admits, their marriage began to quickly unravel once their son, Rex, arrived and the harsh realities of life with a new baby kicked in.

'We were at very different stages of life,' Hetty admits now. 'I'd just had a baby and was new to motherhood, but Ken had had all his children years before. It was difficult, especially as Ken was incredibly focused on his work.'

He also had a fierce temper. 'Anything could set him off,' Hetty says. 'Noise, mess, something as simple as a child's toy left on the floor. He was very particular, especially where work was concerned.

'Looking back, I probably could have handled things better. You have an idealised image of how marriage is going to be, and it just wasn't like that at all.' 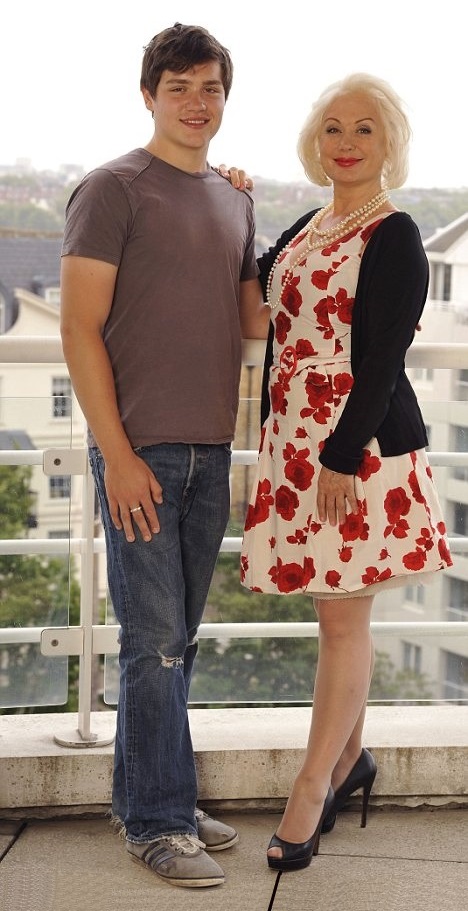 Hetty, who recently appeared in BBC series The Hours,
with her son, Rex

Now, she admits that some of the rows were absurd. 'One of them blew up after Ken came across my old diaries, which I'd kept religiously since the age of 16.

'He got them out and was reading them, shouting: "You tricked me. I thought you were this flamboyant, wonderful creature and you're really this depressive nutcase." It's rather funny now, in hindsight.'

The main flashpoint, however, seemed to be Hetty's career – although she loyally insists Russell was 'very supportive' of her, citing an occasion when he dedicated an entire weekend to helping her prepare her audition song – a rendition of Tina Turner's Simply The Best – for a West End musical.

Despite this, it seems clear that Russell could fly into jealous rages, setting out to sabotage his young wife's career prospects.

He would often fly off the handle whenever Hetty suggested working with other directors. She says: 'Ken was just an alpha male, old-fashioned in a way.'

Yet throughout all this, Hetty says there were moments of loving domesticity, not to mention their episodes of 'mystic dancing', where they would both cavort naked around their living room to music.

'Ken had a very domestic side, too,' she insists. 'He was a great cook and he liked snuggling up together and watching films.' In the end, the incessant highs and lows became too much for both of them. Increasingly, Ken retreated to his cottage in the New Forest while Hetty and Rex remained in London as she pondered her future. 'Not knowing when someone is going to erupt plays havoc with your nerves,' she says. 'It gets to a point where you question how much you can cope with, particularly when you have a child. You wake up one morning and think: "This is too much."'

It says something about the extreme nature of their relationship that they renewed their vows – at the same hotel in Hampshire where they had married – just one month before they filed for divorce in 1997.

As you might expect, the early years following the divorce were rather tricky: Hetty struggled to re-establish her career and money was tight, although Russell did pay his son's school fees.

And he was, Hetty maintains, a loving father. 'Ken saw his son every fortnight for a weekend. Rex would go down to see him in the New Forest and they'd go fishing together and watch films.'

When Rex was eight, Ken remarried for the final time to an American actress called Elise Tribble, known as Lisi, who had contacted him after reading an advert he had placed appealing for a soulmate on a fan website. She had met him once, years earlier, and always held a candle for him, only to find that now, in her 50s, her time had come.

After marrying him in 2001, she spent the last few years of their marriage nursing her ailing husband through the ill health he suffered continually.

'She's an amazing woman and how she coped I don't know,' says Hetty. 'It would test the patience of a saint. Ken wasn't the easiest person on a good day, and on a bad day he could be seriously hard to handle.'

Hetty was first introduced to Lisi by Russell at a film premiere, to which he famously invited all three of his ex-wives. 'It was bit like Henry VIII and his wives,' Hetty says today. 'But it was fine really.'

Much more water has passed under the bridge since then, and Hetty says that today the extended Russell clan get on well together.

Shirley, Russell's first wife, died in 2002, but Hetty is on friendly terms with his second wife Vivian Jolly, a designer, and, of course, Lisi. All of Russell's eight offspring are in touch, too. 'It took a while to achieve that, to connect all the kids up, but it's really good that it happened – especially now that Ken's gone because it means they all have each other,' says Hetty.

'We all went for dinner on the Monday night after Ken died – me, Rex and five of his half-siblings. It was actually really nice. There was sadness there, but lots of wonderful memories, too.'

For her own part, Hetty is also grateful that she was able to make her peace with Ken in an emotional conversation two years ago when she and Rex made a mercy dash to the New Forest to help nurse him in Lisi's absence. 'I wanted to say sorry for the part I played in the marriage breakdown. It's easy to point the finger, but really it was the combination of the two of us together.

'There were tears, some laughter, and a sense of closure. We both knew there was still love there, although not in a way that was threatening to Lisi.'

She is happy, too, that Rex spent a weekend with his father a fortnight before his death. 'They had a meal and watched films together, and it was very cosy. I'm so glad they had that,' she adds.

Perhaps unsurprisingly, Rex has inherited some of his father's creative temperament and hopes to be an actor. 'He's very focused, like Ken,' Hetty says.' He's just done his A-levels and during revision he was just like Ken with work: the door was shut and that was that.

'And when I watch Rex walk across a cricket pitch, it's exactly the same walk his father had across a film set. It's amazing how genes will out.'

And poignant, too, especially now, as the extended Russell clan try to come to terms with Ken's passing.

They will all gather for his funeral, details of which have not yet been released, although Hetty is in no doubt the occasion will not be entirely conventional. 'It will definitely be a bit bonkers,' she says. 'I doubt very much it will be a traditional casket-in-the-ground affair.'

Those who knew and loved Ken Russell would expect nothing else.