The Ritchies and the Ritchie Findlays (Part 1)

As the ticking crocodile of time encroaches ever closer, some things have to be put on record no matter how prematurely, and so it is with the most recent discoveries communicated by the doyenne of Findlay and Ritchie history (Mar 2018). Sometimes it is quicker to seek forgiveness rather than to ask permission.

But it's also an opportunity to display a number of images of John Ritchie, William Ritchie and their great-nephew John Ritchie Findlay that have never before been seen in public, hung as they were (and maybe still are) in the executive boardroom of The Scotsman.

I'm also providing links to more background information about the Ritchie and Ritchie Findlay individuals (though omitting most of their family details) than in the Findlays and Ritchies page.

The colour portraits of the Ritchie brothers and their even more illustrious good-nephew (a nicer term than great-nephew) John Ritchie Findlay, are the result of an enquiry from Uncle Sandy to the board of The Scotsman. 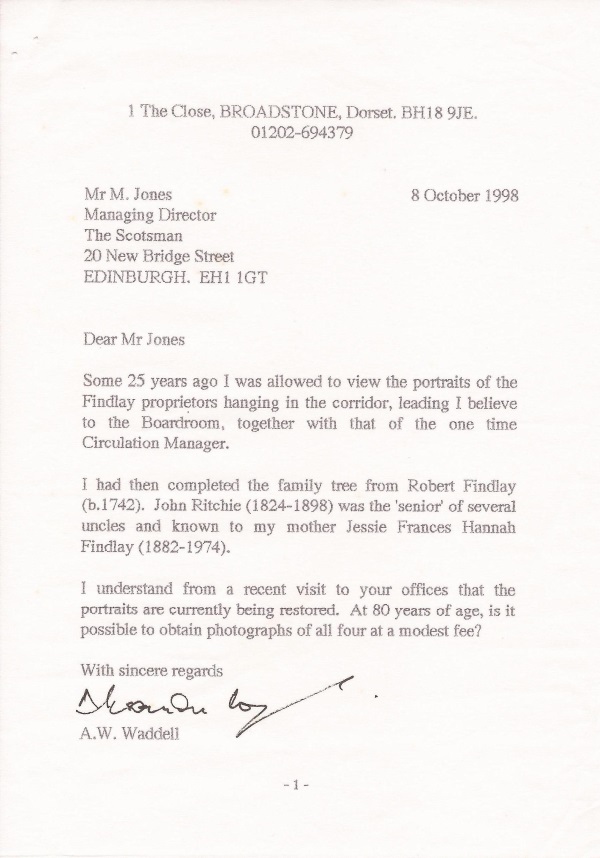 There's an obvious and entirely uncharacteristic slip of the pen in the second sentence of the second paragraph, of course. 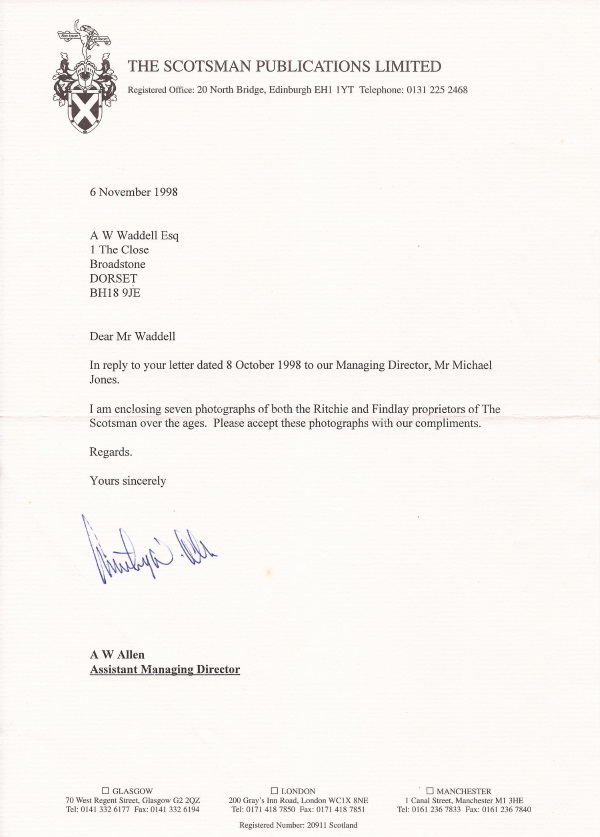 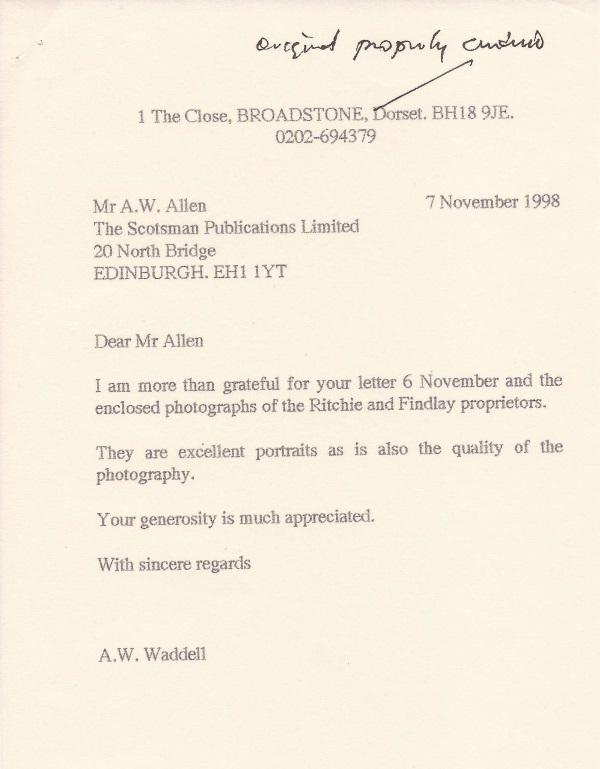 I wouldn't myself say that they are excellent photographs, as they are not taken 'square-on', possibly to avoid unwanted reflections from the glass. A professional photographer could well have done better, but far better half a loaf than none at all.

This newspaper, with which the fortunes of the family were so long entwined, has had a proud and often complicated history. There does in fact exist its very own account, and of course (rather more up-to-date) the Wikipedia one. 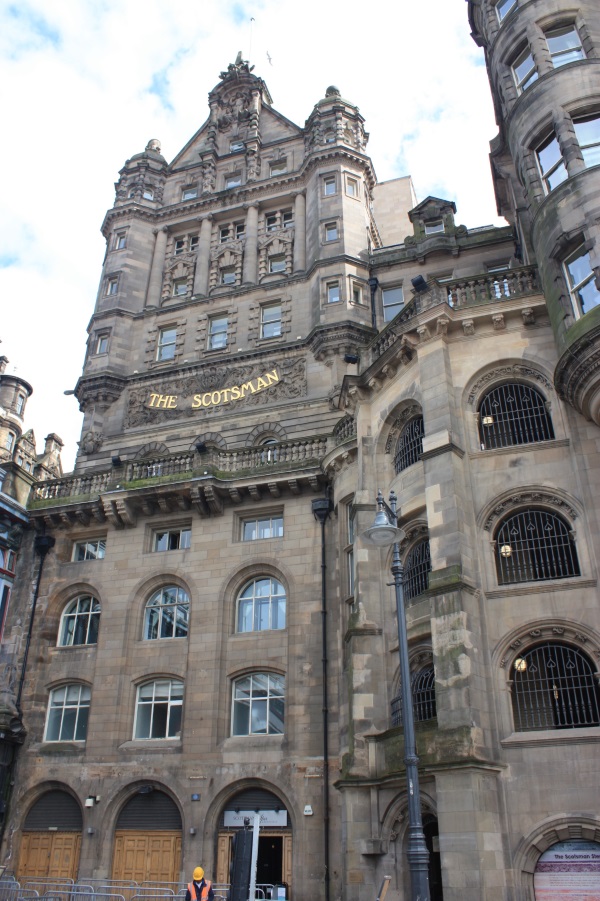 While rather grander than either of them, Aberlour House was to the Findlays as Balquhatstone to the Waddells or even West Dean to the Jameses, an embodiment of family distinction, achievement and wealth, and in each case when profligacy of a particular inheritor necessitated the sale of the house, its loss was (I think) felt not just by the owner but by the wider family too. 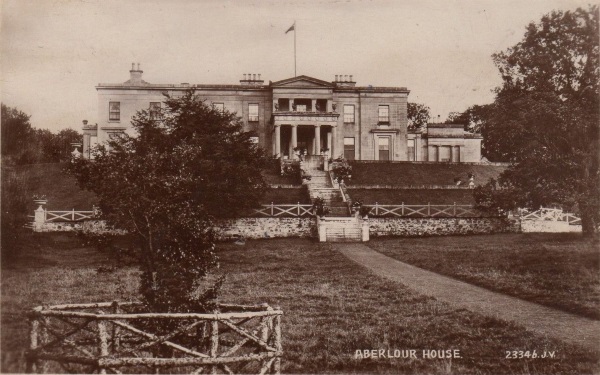 As detailed below, the house (in the Speyside village of Aberlour, in the then county of Banffshire) was bought by John Ritchie Findlay in 1885. It was occupied by him and his descendants through to the late 1930s, but was requisitioned for use by the British Army during the Second World War, which can't have done it much good. It was sold by his grandson John Edmund Ritchie Findlay in 1947; there ensued a slightly complicated connection with the purchaser, the public school Gordonstoun, which had been founded in 1936 by the German educationist Kurt Hahn.

To quote directly from Wikipedia, Wester Elchies was pulled down in the early 1960s because of dilapidation. The prep school continued with just Aberlour [House] but even so there were always problems with the 20 miles that separated the main Gordonstoun campus and the school. In 2004 this was amended with the construction of a purpose-built prep school, also called Aberlour House, on the main campus.

In January 2007 the disused [original] Aberlour House became the head offices of Walkers Shortbread, whose main factory complex at Fisherton is adjacent to the house.

The Threatened Building Survey of Aberlour House has been carried out because of the change of ownership of this important A listed house and in advance of the alterations and demolitions necessary to convert the buildings to office use. The opportunity has been taken to relate the extensive holdings on the house in RCAHMS Collections to what was actually carried out. The survey consists of a graphic record of the house, which will amend the existing c.1879 survey and be date-hatched. The photographic survey will include the house, stables, game larders, lodges, bridges, designed landscape, gardens, column and walled gardens. William Robertson of Elgin designed Aberlour House in 1838 for Mr Alexander Grant. Grant had made a fortune in the West Indies, and commissioned his new house on a prominent site with spectacular views of the Spey. The original house, which consisted of the 5 bay symmetrical front or north block, was never inhabited. Alexander Grant died in 1854 and Miss Margaret Gordon Macpherson, his niece, inherited 'the beautiful little estate of Aberlour and a fortune of fully a quarter of a million'. She added Grant to her name, and employed A and W Reid, William Robertson's nephews, to complete the house to a greatly extended plan. They were involved with works on the estate from 1854 until 1868; they added the porte-cochere in 1857, and enlarged the service accommodation to incorporate a top-lit ballroom, now the staff restaurant; they appear to have added the bay windows to the drawing and dining rooms. They also built the fine stable block and the Italianate West Lodge. Their uncle had probably designed the neo-classical East Lodge and erected the magnificent memorial column.

Miss Macpherson Grant died in 1877, but the ownership of the estate between her death and 1885, when John Ritchie Findlay bought it, is uncertain. The plans illustrated were drawn up c.1879 presumably in relationship to the sale of the estate. Findlay immediately employed his friend Arthur G Sydney Mitchell to make proposals for the gardens, which were not realised (SMW 1880/23/3/8), but a variety of minor internal alterations were made in 1885–6, including a very necessary draught lobby at the front door. Mitchell also created extra bedrooms, and arranged better circulation in the service quarters. Between 1886 and 1892 Findlay made extensive alterations and additions to the house, which included extending the original drawing room to create a larger dining room and adding a large new drawing room to the east, as well as creating a new billiard room. The original dining room was fitted up as a library, perhaps adapting earlier fittings. The architect of this work is unknown, but in 1892-3 he employed Robert Lorimer to decorate the interiors. The RCAHMS holds extensive records of various schemes, but the work carried out includes the marble floor in the hall, the panelling of the main east–west corridor, the unusual chimneypiece in the dining room and various plaster adornments. The library was also embellished with new upper bookcases, along with a very fine chimneypiece with inset antique roundels. There are no drawings for the library in the RCAHMS collections. Stylistically this refit could be attributed to F W Deas, a great friend of Lorimer, who did extensive work in Morayshire. See for example the Kellas Lodge Survey.

The Findlay family sold the house after World War II, and it was turned into Aberlour House Preparatory School. Few major alterations were made except for the infilling of the east service courtyard and the conversion of the stable block into classrooms. Various ancillary buildings were added, but the house remained largely unaltered. The school closed in 2005, and the house was bought by Walkers Shortbread Ltd and is now their offices. The Walkers have embarked on a major restoration of the main house, have demolished some ancillary buildings and propose to embark on the restoration of the stable block.

NB RCAHMS (the Royal Commission on the Ancient and Historical Monuments of Scotland), 1908 to 2015, was responsible for recording, interpreting and collecting information about the built and historic environment. On 1st October 2015, RCAHMS and Historic Scotland were merged to become Historic Environment Scotland

A brisker and more colourful account of the house comes from a cousin who lives in those parts.

... Aberlour House is our next door neighbour, about ... miles away. Interested that you have family connections with Gordonstoun/Aberlour House. I will look for good images on the web, but will certainly send some I will take myself. It is a grand house, built, sad to say, from Slave Trade money (I can send you lots more on this part of the story if you want). Margaret Macpherson Grant, niece of the man who built it, was the first person who actually lived there. She enlarged it and built the two lodges. She was a big local philanthropist, but everything unravelled, drunkenness and a lesbian lover who let her down.

She died in the 1870's without a valid will. The house and estate were inherited by a distant relative, who sold it to JRF senior in the 1880's. He enlarged the house some more, with a large drawing room by Lorimer. The house stayed with the family till my father's cousin Edmund, see family tree, grandson of JRF, sold the lot in 1946. Drink got him too.

The house became prep school for Gordonstoun in the 1950's. ... Gordonstoun pulled the plug in about 2005 and a new prep school was built at Gordonstoun, maybe the right thing to do as maintenance was expensive and the house was falling apart, but very sad for us.

Aberlour House was bought by Walkers (Shortbread), which is a local Aberlour company. Slightly like Chekhov's Cherry Orchard. They have "remodelled" it as their Head Office, a bit bland, but they have done it really well and they have the money for upkeep. Also, Jim Walker is very keen to show relations and friends around.

For "cousin Edmund", read "Sir John Edmund Ritchie Findlay, 2nd Bart (1902-1962)", apparently no stranger to the bottle. So perhaps his successor, in fact his younger brother, Lt Col Sir Roland Lewis Findlay, 3rd Bart (1903-1979), inherited nothing but a note saying "There's no money left", just like the incoming (UK) Conservative Chancellor of the Exchequer discovered at the Treasury in 2015.

The website cited above contains a marvellous sequence of photographs of Abelour House, its interior and its grounds, from which (in due course) I'll reproduce just a few of them below.