Note that the name can also be, and often is, spelt as Rennie – even within the same family line.

Even more importantly, note that flax (which plays such a large part in the Findlay story) has been utilised for at least 6,000 years of human history, since the time of the ancient Egyptians and earlier, as a source of food, and fibre for spinning and weaving into the cloth which we know as linen.

The realisation is now steadily developing, and evidence accumulating, that in the 18th and 19th centuries the Renny name was at least equally reputable in Scottish flax industry and commerce, if not rather more so, as the name of Findlay. And let's not overlook the involvement of James Ritchie, and his elder son John (later to become a newspaper proprietor) in the onerous trade of flax-dressing. Flax was to bring all three families into an ongoing mariage à trois.

Thus the marriage of Margaret Fin(d)lay to William Renny in Arbroath in 1765 was of greater significance than even the young couple themselves might have supposed.

Especially as it seems increasingly probable that Margaret Findlay was sister to Robert Findlay, the linen manufacturer who married Margaret Ritchie just one week later in the same church in June 1765, now (2018) more than a quarter of a millennium ago.

So it becomes correspondingly less surprising that the sixth son of Robert & Margaret Findlay's fifth and most successful son Peter (1777-1855) should have been baptised as William Renny Findlay, after his Uncle William Renny, who was probably his godfather.

But guess what – a prominent business man, flax spinner and linen manufacturer, called William Renny (b 1795), was also trading in Arbroath High St in the 1841 & 1851 censuses, plus an 1845 London Gazette entry for his business. Perhaps a good neighbour and in the same line of business, as Jen Guerin charitably suggests, but perhaps a more successful competitor. He was in all likelihood a first or second cousin of the less successful Peter.

As Jen Guerin also points out, "The William Renny and his wife Joan who were in Arbroath High Street in 1841 had a certain Barbara Bowie aged 11 and her brother Alexander Bowie aged 9 in residence. This couldn't be the same Barbara who married Charles Findlay (b 1831), could it? Right age!"

It would of course be nice to discover more about the William Renny who married Margaret Findlay in 1765, but meanwhile there are several interesting links to the other Rennys of that era.

Click the link to read about the spectacular career of William Warden Renny, as presented by The McManus (Dundee's Art Gallery & Museum). Dundee was in his era still part of the county of Angus, as was Arbroath of course.

The family of my mother – RENNY, of the Montrose and Usan areas, were engaged in the flax trade, certainly from the late C17th. onwards.

They developed trade early on, when the trade first opened following the Battle of Sole Bay, through the Baltic to Riga, where many of them lived for part of their lives during the period 1700 – Russian Revolution. As well as trading itself they built up a shipping business, owning countless 'Baltic Brigs'. In time there were owners, skippers, hands and no doubt ship's boys and cooks also in the wider family.

Naturally they handled other cargoes beside flax, timber and, in the early days, I believe furs. One, who rejoiced in the name 'Pekoe' Renny, successfully smuggled tea in from Hamburg over many years. He was a pillar of Montrose society.

I can only paint a very broad picture, I have no details. I would love to know – What is a 'Baltic Brig?' How can participants in the Baltic – Scottish East Coast trade be traced? Is there any documentation on Scottish families residing in the Riga area in the above timescale? (Some family members entered the Czarist Russian Navy and Army, and acquired Russian wives; there was also a doubtful Countess with Prussian and Finnish links). 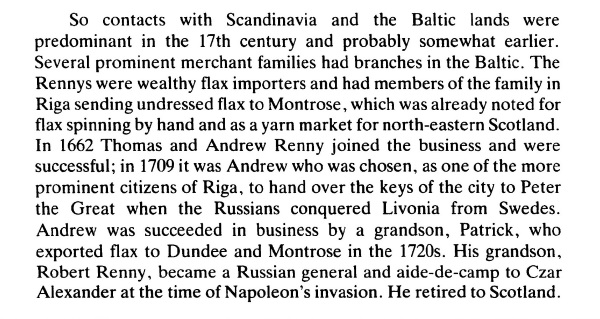