D-Day beachmaster who cleared the way for 30,000 troops and endured 19 days under fire.

Rear-Admiral Teddy Gueritz, who has died aged 89, took over as a beachmaster on Sword Beach at 0800 on June 6 1944, wearing a blue-painted helmet and red scarf while armed with only a large blackthorn walking stick. 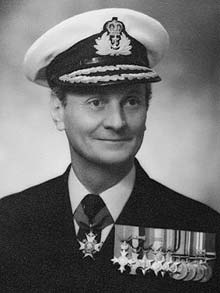 He was charged with making order out of the chaos as men poured ashore and flail tanks attempted to explode mines and clear wire while the beach exits were jammed by vehicles stuck in soft sand. His sharpest memory was of the sight of his wounded superior, Commander Rowley Nichols, and of his army opposite number, Lieutenant-Colonel DVH Board, who had been killed outright. In addition, a fresh brigade, which landed at about 0930, found that the wind had driven the tide higher than expected, thereby narrowing the beach and covering many of the explosive obstacles.

Gueritz worked unremittingly, calling in landing craft, unloading troops and organising routes leading off the beach by clearing wreckage and casualties and maintaining ship-to-shore communications. By evening some 30,000 troops, several hundred vehicles and tons of ammunition had been landed.

Gueritz survived 19 days under fire on the beach until receiving a serious head wound. He had just put on his helmet, "but didn't duck quickly enough," he recalled, when a shell splinter punched a hole in it. It was not until he fainted in a field hospital, where he had gone to have a hand injury treated, that it was realised the back of his skull had been crushed.

Evacuated to Southampton General Hospital he owed his life to the skill of the surgeon John Richardson, the future Lord Richardson who became president of the General Medical Council. Gueritz's skill and courage were recognised by a Bar to his earlier DSC.

The son of a colonial officer in Africa, Edward Findlay Gueritz was born on September 8 1919 and educated at Cheltenham College. He joined the Navy as a special entry cadet in 1937 and was a midshipman in the heavy cruiser Cumberland which reinforced Commodore Harwood's squadron off Montevideo when it blockaded the German pocket battleship Graf Spee in December 1939.

He was serving in the destroyer Jersey, which was part of Captain Lord Louis Mountbatten's 5th Destroyer Flotilla, when it engaged three large German destroyers in the Channel on the night of November 29 1940. Mountbatten's ship Javelin was torpedoed and lost bows and stern and had to be towed back to Plymouth with only half of her original length above water. After further operations in South West Approaches, Jersey was deployed to the Mediterranean, taking part in bombardments of Genoa and Livorno and attacking Axis supply shipping to North Africa. When on May 2 1941 she was mined and sunk in the entrance to Grand Harbour, Malta, with the loss of 35 men, Gueritz was rescued by a Maltese dghaisa, a small fishing boat.

Joining Combined Operations Command he served for the next three years in Scotland, the Indian Ocean and India. His first experience of amphibious warfare was as beachmaster of 121 Force during Operation Ironclad, the capture of Madagascar in May 1942 in order to prevent the Vichy French offering bases to the enemy.

He was awarded the DSC for bravery and enterprise. In the winter of 1943-44 Gueritz took part in combined training and work-up of army and navy forces at Invergordon, using swimming tanks and live firing ranges at Tarbatness, from where the inhabitants had been evacuated.

After the war he was second-in-command of the destroyer Saumarez, which took part in the Palestine Patrol and then was mined in the Corfu Channel Incident, when a British squadron was exercising its right of passage in international waters. Saumarez lost her bows and had a fire which killed 36 crew members. According to one survivor, Gueritz proved "a good and efficient organiser, and his insistence on a smart and well-trained crew was a godsend that stood the ship's company in good stead". Nobody doubted that his damage control organisation saved the ship.

In 1948 he attended the Army Staff College, Camberley, and five years later the Joint Services Staff College. During the Suez campaign in 1956 he was naval force logistics officer on the staff of General Sir Hugh Stockwell, for which he was appointed OBE.

In retirement Gueritz embarked on an academic career. He was a specialist adviser to the House of Commons Select Committee on Defence and director of the Royal United Services Institute. He was president of the Society for Nautical Research, a member of the board of War Studies at London University and vice-chairman of the Council for Christian Approaches to Defence and Disarmament. He edited Brassey's Defence Year Book from 1977 to 1981, and was joint editor of The Third World War (1978), Ten Years of Terrorism (1979) and Civil Defence in the Nuclear Age (1982).

During the 1970s Gueritz had the unique experience of wargaming with senior British and German officers when they played Operation Sealion, the German plan for the invasion of Britain in 1940 and 1941. He was satisfied that although the exercise showed the Germans landing, most of their converted Rhine barges were sunk, and eventually some 100,000 troops surrendered.

Teddy Gueritz, who was appointed CB in 1971, died on December 21. He married, in 1947, Pamela Britton who survives him with their son and daughter.